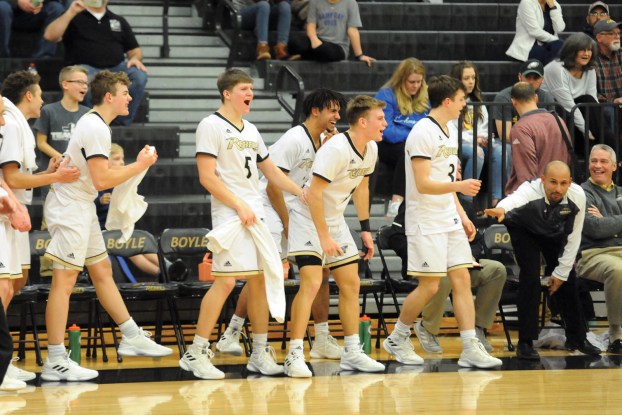 The Boyle County boys basketball team’s year was up and down, on and off of the court.

But the Rebels have reason to be excited, and head coach Steve Adams said that his players made it a good year, despite Boyle’s 9-17 record.

“Whenever visitors would come to practice, they’d say, ‘wow, y’all must be leading your district and region,’” Adams said. “Because the kids were so positive. It was such a good atmosphere, the kids were awesome. You can’t control injuries, and it was like every week someone had to have a different role, play a different position. Right up to the first game of district.”

Boyle’s year started with star juniors Grant Hotchkiss and Reese Smith out with injury. When they came back, the Rebels had their most productive week of the season: Two district wins (at Lincoln and a 25-point victory over Garrard), and a close loss to Collins.

Adams credited his leaders for keeping an optimistic outlook throughout the season, despite the only consistency of the season being inconsistency.

The same can be said for Boyle’s seniors: Will Imfeld started at the beginning of the year, then moved to the bench when Hotchkiss and Smith returned to the lineup. By the end of the year, he was back in the starting lineup. He’d play inside or on the wing.

“We were just trying to put people in positions where we could be successful, but all it was, somebody had to do something different all the time,” Adams said. “But the kids were tremendous, they said ‘whatever you need me to do, I’ll do it.’ They were very selfless, having to play different positions, learn something different.”

Caleb Jackson started as a guard off the ball, then became the team’s primary ballhandler when Aden Slone transferred from Boyle. Jacob Lassiter played inside and outside. Cameron Britton injured his wrist at the end of the year.

But they continued to come to practice with a positive outlook, Adams said.

“The kids were awesome. We just kept thinking, if we could get everybody healthy, we could get on a nice little roll,” Adams said. “It just never happened, but the kids, I can’t say enough about how awesome they were. They came out every day and worked hard in practice and had a good time, played hard in games. It could have been a miserable year.

“We also preached to them, we can only control the things that we can control. That’s how we play, what we do and how we try to get better. We got better as the year went along individually and team-wise, we could just never get the consistency that we needed going through the whole year.”

Adams is hoping the future will bring more consistency: Freshmen Hagan Webb and Luke Imfeld received “invaluable experience” this season. Luke Imfeld led the team with 56 threes this season and was named to the 45th District All-Tournament team. Sheperson, Smith and Hotchkiss could round out a full starting five return next year.

“We’ll have some more good young players coming up, the freshmen team went like 9-2 and the JV team was like 15-3,” Adams said. “We’ve got some nice players and pieces coming up. Just like anybody, all of us in the region and district, everybody’s one sprained ankle away from being able to get beat.”

This year marked just the third time in the past decade that Boyle didn’t make the region semifinals.

“I think we’ve all been around long enough, our coaching staff has been the same coaching staff forever, we knew coming in this year that we were going to be real young and inexperienced,” Adams said. “You throw in the Grant Hotchkiss and Reese’s injury, then Grant getting hurt again. That just multiplied the problems, but the kids just wanted to do what they could do to help the team the best that they could.

“You don’t always have to win the game to win. You learn a lot of life lessons that things don’t always go the way you hope, things have got to change, you’ve got to adapt. It’ll make us stronger and better in the long run. It was a pleasant experience, given the circumstances, because of the kids.”

STANFORD — Baylor Mattingly made the most of his first varsity start by scoring a team-high 18 points to help... read more