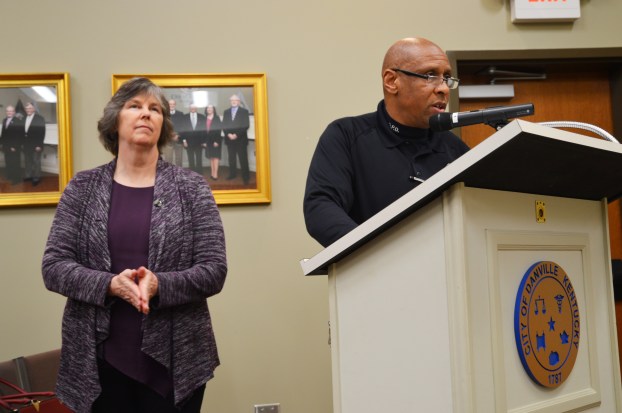 Two standing ovations were given to retired Officer Sally Bustle, who left the Danville Police Department in January after more than 20 years of service.

Chief Tony Gray shared with the city commission this week some of her past, including that she was a military police officer for five years, and an officer in Lancaster for two and a half before coming to Danville.

“Sally was hired as a housing authority officer,” Gray said — a position previously funded by a federal grant. He said Bustle was a patrol training officer, a night patrol officer, K9 handler, and a RAD instructor — which stands for rape aggression defense. She taught women how to handle themselves in attack or sexual assault situations. 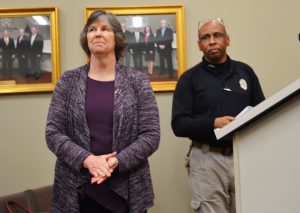 “That’s just some of the certifications she has … She’s had a long, full career,” Gray said.

Bustle stuck it out “during some rocky times” with the Danville PD, Gray said. There have not been that many officers who retire from the department with 20-plus years of service behind them.

“Just thinking about her career reminded me of an incident” that happened about three years ago, Gray said.

“We had a barricaded suspect out on Boone Trail. Remember?” Gray asked Bustle, who quickly nodded her head.

It was a 26-degree day, he said, with about a foot and a half of snow on the ground, with Bustle being one of the first officers on the scene, who had to stand post outside the residence for about four and a half hours.

“During that encounter, the suspect came out and pointed and cocked the weapon at those officers, several times during that four-and-a-half-hour encounter. We were able to enter that house and take that suspect into custody without any injury to himself or to any Danville police officers,” Gray said. “I wanted to bring that up because it’s just what kind of officer she’s been.”

He said the training she’s done while on the force greatly affected younger officers; working with the K9 unit helped rid the community of some drug issues; and the RAD training worked to empower women.

“Everything she’s done has helped to benefit others. Today I’d like to wish her a very fun and enjoyable retirement, and I truly appreciate not just her service, but her friendship and support to my team. We will miss her, and I want to say thanks,” Gray said.

Bustle received a standing ovation from the crowd, as well as a retirement gift, presented by Mayor Mike Perros on behalf of the city.

Perros asked Bustle what she planned to do with all of her free time.

“There’s a lot of things at home I want to get done,” Bustle said.

A Boyle County man has been sentenced to 27 years on federal drug charges related to the death of three... read more