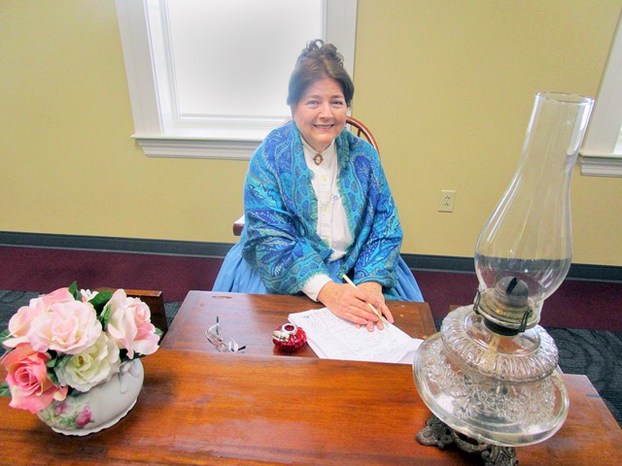 Two letters about Benjamin Logan, who established Logan’s Fort in Lincoln County, were written in 1844 and 1845 by his daughter Mary Logan Smith, who tells of his life as she remembers it.

The letters were transcribed from papers written by historian Lyman Draper by Marion Cooper and Peggy Denham of Stanford. The letters are part of the Boone Papers in Draper’s manuscripts.

She was in her mid-60s when she compiled the letters for Draper informing him of events she had heard about her father.

In the first letter, written December 6, 1844, Mary mentions things her mother and others said about her father.

Benjamin left Pennsylvania with his family and one black woman in the mid-1700s. He arrived in Harrodsburg in 1775. Her brother William was born in 1776 in Harrodsburg.

“I heard my mother say my father was so anxious to get the ground cleared and a crop in.”

Benjamin Petits, who lived at St. Asaph (Stanford), and Logan helped each other get the crops in and build their cabins.They had been in Kentucky a few months before the Native Americans found out. They traveled to Harrodsburg in the night and stayed there over a year until they finished the Logan’s Fort.

Mary wrote about a siege at the fort while the women were milking cows.

Burr Harrison was wounded and another man was killed when Native Americans attacked.

After the siege, Logan found papers on Harrison which contained an offer of a commission in the British Army and a certain amount of gold. He gave the papers to his wife and told her to hide them and not show them to anyone.

The Native Americans told (Simon) Kenton that they had killed Logan, but Logan only had a wound to his arm.

Logan’s arm healed down by his side so as to be useless, however, later, he was at the mill he had built near the fort, when he fell through a hole too small for his body. His arm caught and was straightened out and was as well as ever.

Mary told of her father’s death in the second letter written April 25, 1845, in Bardstown.

Logan died Dec. 11, 1802, while attending a sale near Shelbyville. Before sitting down to dine on the day of his death he requested two friends, Whitaker and Simpson, to sit by him. He died moments later.

Draper had asked about the capture of Nathaniel Logan’s family, which Mary said she had never heard.

She mentioned Nathaniel going to Russell’s Creek in Casey County with Robert McClure and a black woman and her three children with him. Nathaniel was attacked by a party of Native Americans and McClure had the only gun.

Nathaniel was shot and the four others were captured. While the Native Americans plundered their packs and took their horses, Nathaniel escaped.

Mary’s grandfather William Montgomery moved his family from Virginia in 1779 and settled on Hanging Fork, 10 miles from St. Asaph’s.

In 1780, Native Americans attacked Montgomery’s cabin. A black man was shot as he opened the door.

“My grandfather ran to the door and pulled the negro in and he also was shot just as he opened the door. His son William pulled him in and barred the door and thrust his gun through the opening between the logs and shot one of the Indians and left the cabin.”

“Later, the Indians broke into the cabins of my uncles, Russell and John Montgomery, killed John and captured his wife, and Russell’s wife and four children.”

A report of the attack was sent by Benjamin Petits, who heard the firing, and went after the Native Americans and rescued the captured, except the eldest daughter of Mrs. Russell, who was killed.

Mary writes about the second Indian siege at Fort Logan when a man was shot down near the gate and her father carried his body into the fort. He found a package addressed to General Clark and General Logan. They contained offers from the British commander in Canada of a large amount of gold and a commission in the British Army to every American who would join the British Standard.

Logan concealed the papers from everyone in the fort for fear his men might be inducted to leave.

Before the siege the men regained confidence in their position and strength and assumed an air of defiance to the enemy.

Mary wrote she had five brothers and two sisters:

Benjamin, John, Hugh, William and Nathaniel, and three daughters, Mary, the writer of the letters, and Elizabeth and Margaret Ann.

Her brother, William, was born December, 1776, in Harrodsburg and died Aug. 8, 1822 in Shelby County. He was the first male child born in Kentucky.

After Logan’s father David died, he left the care for the family to Benjamin, who divided the estate equally among the children.

Mary’s mother, Ann Montgomery, was born in December 1751 in Virginia and was a daughter of William and Jane Montgomery.

Mary’s grandfather, David Logan immigrated from Ireland and married Jane McKinley, also of Ireland, in Pennsylvania. Mary’s father, John Logan and his bride Ann Montgomery, also of Irish descent, were married in Rockingham, Virginia. Afterwards, they moved to Holstein on New River where they remained until spring of 1775, and he headed to Kentucky to settle at St. Asaph’s.

He was in Lord Dunmore’s campaign and from the fact of his being the largest and stoutest man in his regiment, the famous Shawnee Indian Logan assumed his name.

In 1794, he went to Shelby County and erected cabins and a water grist mill on Bull Skin.

Three years later after the birth of all his children, he moved his family to Shelbyville.

Logan was a Democrat of the Jefferson school and served as delegate to the Virginia Legislature.

In 1781, while attending the General Assembly of Virginia in Charlottesville during the invasion of Cornwallis into the state from South Carolina, he was ordered to seize the governor and assembly.

Hearing of the seize, the governor and members fled.

Logan picked up the bag containing the state treasure in fold and silver and carried it off “up the hill” in safety, beyond the reach of British plunderers.

Logan also was a member of the conventions that framed the two constitutions of Kentucky. In 1796, he was a candidate for governor against James Garrard and Thomas Todd, losing the election to Garrard after Todd dropped out.

Mary concluded her letter with her father’s comments on beef prices in 1788.

He had a lot of beef slaughtered at the Falls, Louisville, and shipped via boat to New Orleans. He sold it out, but the prices were so low, he considered the trip a loss.

When he was about to return to Kentucky, some of the buyers in New Orleans who bought the beef paying half its worth, accosted him and asked him:

“Well, General, when will you bring us another load of beef?”

He replied, ‘When I bring men enough with me to eat it.”’

Those who heard the reply went immediately and raised money to pay him his price and demands, which they paid without further effort on his part to enforce it done.

From our files, March 2

100 YEARS AGO — 1919 Dr. J.W. Weber, of Stanford and Richmond, the famous chiropodist foot doctor, who guarantees to... read more