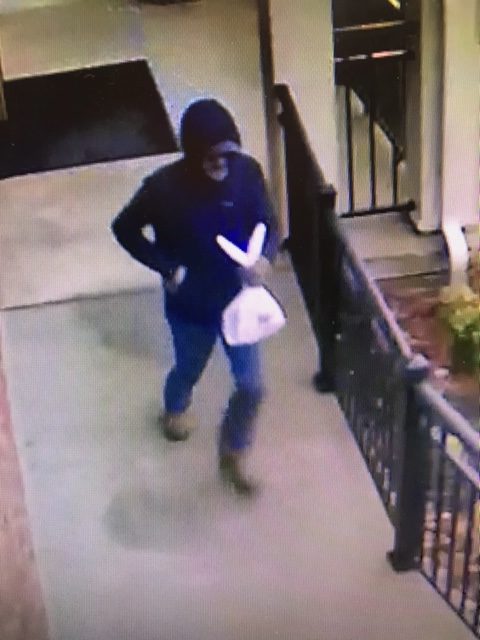 A screenshot of a man who held Monticello Banking Co. up by gunpoint this morning is seen.

According to local officials, Monticello Banking Company in Perryvillle was robbed this morning. Boyle County Sheriff Derek Robbins says authorities were called to the scene around 9 a.m. and are still searching for the perpetrator who fled the bank on foot. 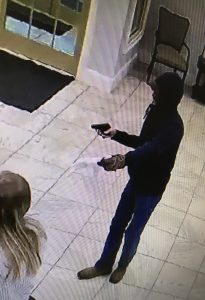 Employees said a slim white male, appearing to be in his late 40s to mid 50s, held them up with a small, semi-automatic handgun. How much money was taken has yet to be determined. The man was wearing blue jeans, a dark blue hoody, a red or orange shirt and a ball cap that partly covered his face. He also appeared to be wearing brown work boots.

According to investigating officer Lt. Kyle Lyons with the Boyle County Sheriff’s Office, a witness who was working on a street light across the road from the bank saw the suspect walk around the building, seeming to wait on customers to leave the building. Lyons said they think the suspect got tired of waiting and entered the bank and pointed a gun at the one remaining customer and three employees.

The suspect forced one of the bank employees into the vault to get the money, Lyons said. No one was injured during the robbery, Lyons added. 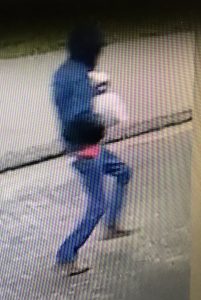 He then fled through the front doors, turned right, then again right onto Polk Street, according to the witness. He took another right and headed toward the convenience store. “He kind of made a circle,” Lyons said. They don’t know if he had a vehicle waiting.

Robbins said the man had no other distinguishing characteristics. They are still awaiting the full footage to be released by the bank’s corporate office, which is in Monticello, Kentucky.

Perryville Elementary School was placed on a “situational soft lockdown” in response to the alleged robbery, school district spokesperson Stephanie Wade said. Monticello Bank is located at 314 E. Second St., and the school is on West Fourth Street.

“All instructional activities were to resume as normal. It was just being extra vigilant on supervision of the students and monitoring of exterior doors. And no students (can) be outside of the building today until the lockdown is lifted,” Wade said, adding that Perryville Principal Chris Sloan sent a one call out to all parents, keeping them up-to-date with what was happening and why. “All our students are safe and fine.”

Robbins said there is no indication the school will be affected by the incident, but since there is a “dangerous guy, potentially on foot,” school officials took the precautionary measure. 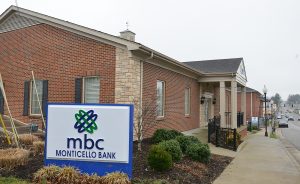 “We have no idea how much money he took yet. Nobody was injured, but people are shook up pretty badly,” Robbins said. At just after 11 a.m., Boyle sheriff’s deputies had released the scene and the bank was still closed. “I’m not sure if they’ll stay open today or not. They’re pretty traumatized,” Robbins said.