Conventional wisdom has it that Amy Grant put Contemporary Christian Music on the map, becoming the first CCM artist to have a platinum record, the first to hit No. 1 on the Pop charts, and the first to perform at the Grammy awards.  Since then, Grant has been strumming her way through a 30-plus year adventure as a singer, song writer, author, television host, and speaker.  On March 3, Grant will present a night of inspiration, stories and songs to the Newlin Hall stage. 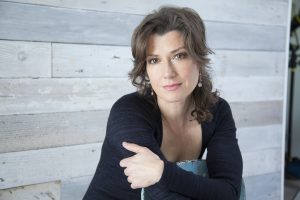 “There are some musicians that transcend styles and draw people together,” said Norton Center Executive Director, Steve Hoffman.  “Amy Grant inspires us through her music, through her words, through her honesty, and through her vulnerability.  As a fan, her messages are transformative.Without a doubt, the mainstream public is drawn to her songs, lyrics, and voice; and to her, personally. We are thrilled that she is returning to the Norton Center after over a decade.”

Unsurprisingly, her accomplishments do not stop with the ground-breaking “firsts” she has had in the world of Contemporary Christian Music.  Grant’s successes have been consistent throughout her career, resulting in six No. 1 hits, 10 Top 40 pop singles, 17 Top 40 adult contemporary tracks and multiple Contemporary Christian chart toppers.

In recognition of such achievements, Grant has received six Grammy awards, 26 Dove Awards, a star on the Hollywood Walk of Fame, and a star on the Music City Walk of Fame.  Most recently, she was inducted into the Gospel Music Hall of Fame in Nashville.

Author chat with Silas House at the library Tuesday