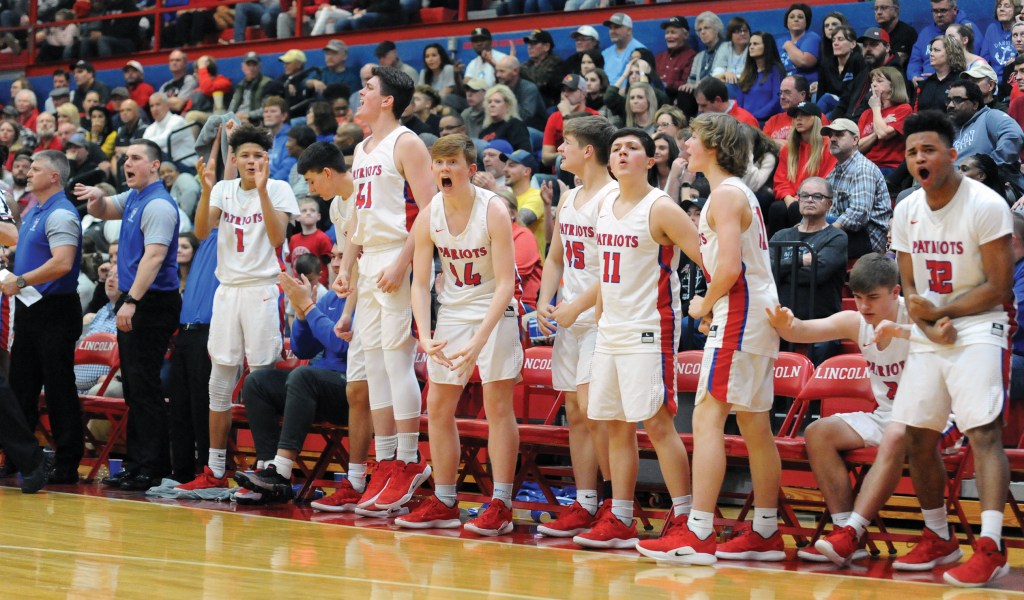 STANFORD —  The last time Lincoln County played in a regional championship game (2015), it was a 45th District matchup.

That will be the case Saturday night as Lincoln County, the 45th District champion, faces off against Danville, the runner-up, in the 12th Region Tournament championship game at 7 p.m. at LCHS.

The host Patriots locked up the final spot in the title game in an absolute thriller Friday night, prevailing over Wayne County in five overtimes, 67-64, at J.C. Eddleman Gymnasium.

Lincoln and Wayne, champion of the 48th district, played 52 minutes to get to the final result. Seven players hit double figures in the game, with Jaxon Smith, in his first game back after battling the flu, leading the Patriots to the win with 19 points. Blake Smith poured in 17 points and Elijah Frye tallied 13 points. The Cardinals had four players in double figures with Aubrey Weaver leading his team with 19 points. Kameron Gehring finished with 15 points and Jadon Pryor and Thomas Spencer had 10 points apiece.

Spencer scored the game-opening bucket to give Wayne (24-9) its only lead of the first half. Lincoln (22-12) answered the bucket with a 15-2 run after a Blake Smith 3-pointer, two Frye buckets in the paint, a bucket apiece by Riley Bodner and Jaxon Smith and a Darius Napier putback and two free throws.

The Patriots, who led 15-7 at the end of the first, took their largest lead of the game in the second quarter, going up 14 with 5:54 left in the first half. Frye scored in side and Blake Smith sank two free throws before Jaxon Smith went baseline to make it 21-7.

Lincoln took a 24-15 lead into the half with Bryston Alcorn bombing in a 3-pointer before the horn.

Wayne would overtake Lincoln before the end of the third quarter as the Cardinals outscored the Patriots 19-7 to go on top 34-31. Weaver drained two 3’s in the third to bolster the Cardinal run and Gehring had one triple.

Lincoln led by as many as five, 42-37, in the fourth quarter after a Jaxon Smith 3-pointer, but Wayne would outscore the Patriots 7-2 over the rest of regulation to send the game into overtime, deadlocked at 44.

In the first overtime, neither team scored. Bodner hit inside early in the second overtime to put Lincoln up 46-44 but Wayne would have an answer as Pryor converted on a three-point play to give the Cards a 47-46 lead. Blake Smith scored on a driving layup to nose Lincoln back ahead 48-47 only to have Weaver sink a free throw for a 48-48 tie, and a third overtime.

In the third overtime, after trailing 51-48, Pryor and Spencer scored back-to-back buckets and Spencer added a free-throw toss to give Wayne a 53-51 advantage. After Jaxon Smith missed a second free throw on a two-shot foul, it looked like Wayne was ready to just dribble out the clock (26.7 seconds to go). But Weaver was called for a walk at midcourt. After two missed field goals, Jaxon Smith was fouled and he sank the first shot to deadlock the game at 53.

Wayne led by as many as three points with less than a minute to play in the fourth overtime, but Lincoln would force another tie with Frye scoring a field goal and Bodner closing with a bucket in the paint off a Jaxon Smith assist to make it 60-60.

Another back and forth battle was exchanged in the fifth overtime. Three lead changes would be exchanged before Jaxon Smith came up big with a basket with 23.2 ticks on the clock to make it 65-64. Weaver put up a shot on the other end to try to edge Wayne back ahead, but the shot missed and Blake Smith grabbed the rebound and was fouled by Gehring. He then went to the foul line and sank two free throws for a 67-64 Lincoln lead with 2.1 seconds left. Weaver put up a potential game-tying shot just before the buzzer but the shot bounced off the rim.