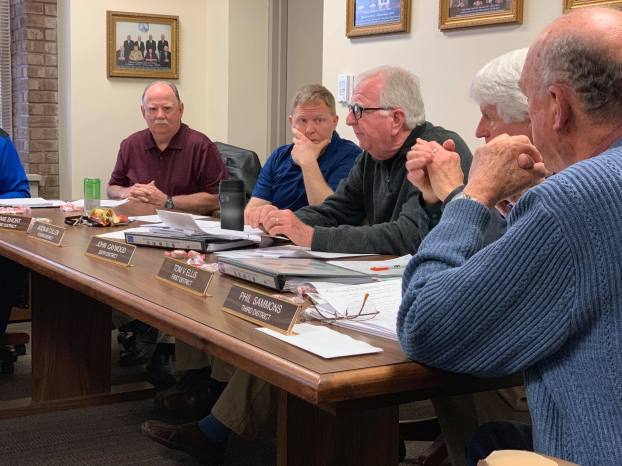 Magistrate Jamey Gay said Danville had previously claimed Parks & Rec needed to be run by a single entity, but he feels it already is.

“The current structure does give us the single entity,” he said.

But “if the city is adamant about it being” run by one government or the other, Gay said it would make more sense for the county to run Parks & Rec.

“That way, every voice is still heard in both those formulas. In a city-only formula, only the voices within the corporate limits of the city are heard. The county residents living outside the city limits won’t have a voice.”

Gay the city has pointed to its recently completed master parks plan as evidence of the need for a reshuffle, but “there’s maybe two to three sentences” in the entire report that discuss running Parks & rec under a “single governmental entity. The rest of the document talks about programming, funding and compares stats with benchmark communities.”

Magistrate Phil Sammons said he was in favor of making needed appointments to the Parks & Rec board and continuing under the current structure.

“We have a sharp chairman,” Sammons said. “… Let the board hire a director.”

Magistrate Tom Ellis had prepared a three-page document, which he said additms the process for how a volunteer board and a professional director work together to operate an agency.

“We already have a reasonable, practical and logical process in place that has functioned well in the past and it mirrors other Boyle agencies,” Ellis said.

Ellis also read an email from Jo Marie Lammy, which Lammy also submitted as a letter to the editor to The Advocate-Messenger.

“… the major park we oversee, Millennium Park, is owned jointly by the city and county and funded by both city and county taxpayers. Therefore it baffles me why either of these governmental bodies should have proprietary and solitary reign over the decisions made to continue and improve the system,” Lammy wrote.

Caywood said he felt like the “management and operational side is all the city’s asking for.”

“We can have input based on the structure we put together,” he said.

Caywood said the court should “consider it being one person, either us or the city. I don’t see us in that role. We don’t own the parks the city owns, we are only in a partnership on one. The way we structure the deal is the most critical part.”

Magistrate Jason Cullen expressed frustration with how much control the city has taken in the job posting and receipt of applications for the open Parks & Rec director position.

“We don’t have any way of holding the city accountable, especially if we give them complete control of operations. Even now, where we have a joint body overseeing this, we don’t have the respect from the city,” Cullen said, motioning to Commissioner Rick Serres who was present. “I’m sorry, but that’s the way it came across … that’s the issue I have.”

Serres told Cullen the Parks & Rec board actually approached the city for help in posting the job “in order to cast a wider net.”

Ellis said he hasn’t seen any applications for the director position and asked if Serres had. Serres said no, he hasn’t; they have all been forwarded to the board.

Hunt said he realized some “people took offense” to the city receiving the parks director applications, and that “if we’re going to do it, we need to do it 50/50, it’s not one or the other.”

“I’m not ready to let go and have just one person being in control. I don’t think we’re valued right now as a joint (partner), and I don’t think we’ll be valued going forward,” Cullen said.

Gay said the ordinance can be worked on, and he feels the financial agreement will be the first order of business with a new director, who can help work out an acceptable formula with the board, city and county staff.

Cullen asked what the possibility is of having a magistrate serve on the parks board. Gay said elected officials are currently able to serve, according to the 30-year-old ordinance. Others brought up there should be a magistrate and a city commissioner appointed to the board.

Caywood said in the past, magistrates did serve on other boards, but the court “later realized they become cheerleaders for the board they serve on … So we got away from it.”

Gay questioned the assertion made previously by City Attorney Stephen Dexter that the board is unable to develop partnerships, such as construction projects for a new swimming pool, he said as an example.

Commissioner Serres confirmed that Dexter has said the partnerships are “not possible in the current form” the board is in now.

“I’m not sure where those concerns come from,” Gay said. “The way I read the current ordinance and KRS 97 … the board has all the authority it needs to make those agreements.”

Caywood stood by his opinion after all discussions. “I believe it needs to be one person or entity in charge.”

Cullen disagreed, and said there’s “history on our side that the parks program has felt like it’s been stifled or handcuffed with how they’re currently managed — or micromanaged.”

Cullen said if they do ultimately agree to place Parks & Rec administration firmly under one government or the other, “we may really want to take some input from the group (Parks & Rec board, employees) … Whether they want to live with mom or dad.”

Local resident Ernie Coulter told magistrates “the same discussion” about sharing the responsibility for Parks & Rec happened decades ago, when two magistrates known as the “No Boys,” Marshall Martin and Martin G. Curtis, were on the fiscal court.

“Those two guys never believed the city would split 50/50, and that’s doubtful in my mind right now. Sounds like they’re taking an 80-percent run, and you all are taking 20,” Coulter said. “Those two guys said this, in fact, would become one of the biggest thorns in the fiscal court’s side, and they were right.”

Cullen said he believes the negotiations can result in a positive outcome for Parks and Rec.

“We have to have trust,” Cullen said. “All we can do is trust the city wants the same thing we want.”

Hunt said the topic of who the county will appoint to serve on the Parks & Rec board will be discussed during March 12’s regular meeting.

An act of criminal mischief inside the Danville Walmart Supercenter over the weekend created a stinky situation and the loss... read more