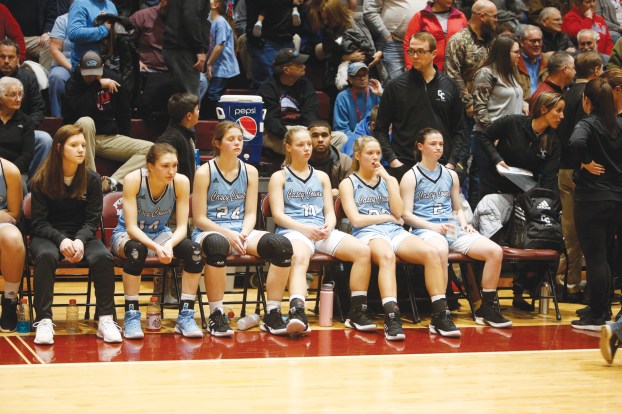 SOMERSET – Tara Weddle hopes this one hurts for a while. Maybe even until this time next year.

Weddle and the Casey County girls returned to the 12th Region Tournament finals with a much better chance to win this year than last but left with another loss. They also left with a different kind of feeling, one the coach hopes will motivate them as they work to make another run at the title.

This game figured to be far different than the Lady Rebels’ appearance in the 2018 regional finals, when they fell to a Mercer County team that was on its way to a second straight state championship. But they were well short again Monday night, dismantled by Southwestern in a 68-54 defeat.

However, Weddle said she could tell that her team, which is dominated by juniors, took this loss a little harder than the loss to Mercer a year ago.

“I think this one stung worse than last year,” Weddle said. “It’s different when you lose to the two-time state champion than when you lose a game that you could have won. They’re much more emotional tonight than they were last year, and I told them, ‘Bottle it up. Pack it away and when we start offseason you know what we’re working for now.’”

Casey (25-9) went toe to toe with Southwestern (24-5) for most of three quarters Monday, but the Lady Rebels were left in the dust in the final 10 minutes of the game, when they were outscored 25-15.

Even though most of the game was close, however, Southwestern seemed to control most aspects of it en route to its first regional championship.

“They came out really hungry and had really high intensity, and I don’t think we matched their energy tonight,” Weddle said.

The Lady Warriors shot the ball well in the second half, led by a 1-2 punch from Regi Cundiff and Kallie Sheron, who scored 22 points each. They hit 10 of 20 shots from the field and all 14 of their free throws.

Meanwhile, Casey’s top scorer on the season, Gena Cravens, was scoreless until she made a layup with 2:05 remaining and finished with only four points. Lauren Lee led the Lady Rebels with 16 points, but Weddle said they need a good offensive output from more than one player to succeed.

Casey fired at will from the perimeter against Southwestern’s 2-3 zone defense, just as it had done in a 43-42 loss at Southwestern on Dec. 4, and the results were similar. The Lady Rebels went 1 for 30 from 3-point range in that game, and they were 2 for 24 in the rematch.

“I don’t know if it’s something mentally with us or what,” Weddle said.

Southwestern also controlled the boards, outrebounding Casey 32-20 as it won for the first time in three appearances in the regional finals.

Casey was in the finals for the fifth time in nine years, but the Lady Rebels are 0-5 in those games. They last won the 12th Region in 2009, and they were bidding for their third title Monday.

They were off and running when Jordyn Stephens, who scored 10 points, sank a 3 on the first possession of the game, and they were still within a basket at the end of a first quarter in which Lee scored seven of their 12 points and grabbed four of her team-high eight rebounds.

Southwestern scored the first six points of the second quarter to go up 20-12 and led by nine before Casey scored nine of the last 12 points of the first half – Lee had five more during that run – to pull within 29-26.

The Lady Rebels were still within four points late in the third quarter before consecutive baskets by the Lady Warriors put them up 47-39 and launched a 19-7 run.

Cundiff opened the fourth-quarter scoring with a second-chance basket, then sank two free throws, and Jenna Wood followed with a 3-pointer that made it 54-41 with 6:05 to play.

Stephens stopped the bleeding with a 3-point play for Casey, but the Lady Rebels didn’t get another field goal for almost three minutes. Southwestern pulled away with three layups by Sheron and two free throws by Cundiff, taking a 62-46 lead with 2:57 left that sealed Casey’s fate.

There’s every reason to believe Casey, which has no seniors, will contend for a championship again in 2020. And Weddle said she’s fine with the fact that the Lady Rebels were smarting after this loss.

“If we’re not going to go to Rupp Arena,” she said, “then I want them to feel a little bit of the sting from it. I definitely do.”