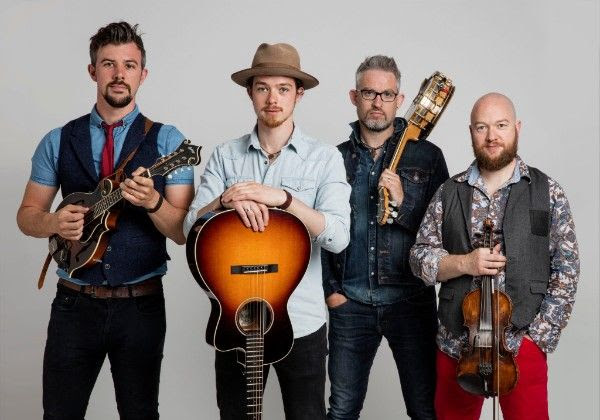 Galway, Ireland’s We Banjo 3 is bringing their innovative fusion of styles to Danville’s Norton Center for the Arts on March 17.  The highly charismatic musicians have developed a loyal following throughout the globe, winning over audiences with their ability to find musical common ground between old world tradition and authentic Americana.

“One of the most sought after bands from Ireland, We Banjo 3 brings amazing musicianship, a Celtic meets Bluegrass sound, and a dose of good humor to the Norton Center on St. Patrick’s Day,” said Steve Hoffman, executive director of the Norton Center.  “The two sets of brothers are the real deal in terms of virtuosity, showmanship, and high energy.”

Their crossover style is more popularly described as that of the, “Irish Punch Brothers,” and is beautifully reflected on the group’s newest album Haven, the follow up album to String Theory, which went to No. 1 on Billboard’s World Music Chart in 2016. Made up of two sets of siblings — brothers Enda Scahill (tenor banjo, vocals) and Fergal Scahill (fiddle, viola, dobro, percussion, guitar, mandolin, vocals) and brothers Martin Howley (tenor banjo, mandolin, vocals) and David Howley (lead vocals, guitar), We Banjo 3 finds a natural symmetry as well as a cohesive chemistry.

Likewise, the individual members bring a special credence that extends well beyond their familial and genealogical connections.  Martin is a seven-time all-Ireland banjo champion and the first Irish musician to perform at the Grand Ole Opry.  Enda has recorded with Ricky Skaggs, the Chieftains, and many others, aside from being considered as one of the world’s leading authors and authorities on Irish banjo techniques. Fergal has performed with dozens of artists at home and abroad, and is widely recognized as an Irish champion of both fiddle and bodhran.  David has been cited as a solo artist of exceptional skill, while Garry is a veteran of work with numerous bands and individual artists.

A special artist gathering will be offered at 4:30 p.m. March 17, the night of the concert. Participants may bring their instruments and jam with We Banjo 3 in Newlin Hall.

This event is free and open to the public, no matter the skill level; come to participate or observe.  RSVP to Jessica.durham@centre.edu.

And then from 6 to 6:45 p.m. in the grand foyer, a pre-show demonstration featuring the Kentucky McTeggart Irish Dancers, from Lexington, will be offered.

Hoffman says, “While we strive to bring the best artists from around the world to the Norton Center, we also offer regional artists an opportunity to share their wonderful talents with our audiences.”