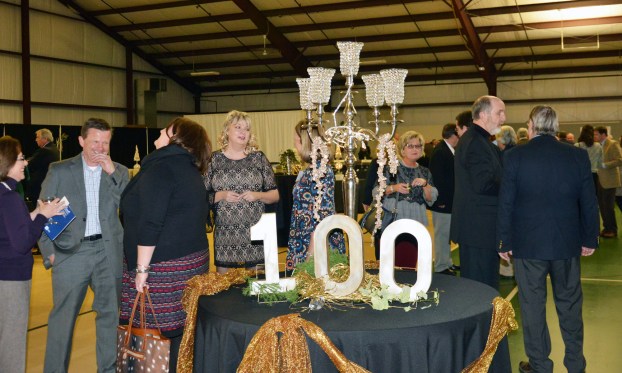 Danville-Boyle County Chamber of Commerce awards individuals, businesses who have made mark on community

The Chamber of Commerce held its annual awards ceremony Friday night at Chowan Hall. This year’s theme was “Historically Bold — 100 Year Bash,” in celebration of the Chamber turning 100. The event offered entertainment by the Heritage Area Strings Program, as well as singer/songwriter Travis Kern.

The awards program, emceed by Charlie Perry, included a brand new category this year: the Historically Bold Award, presented to both Main Street Perryville and Ambrabev. The award was created to recognize those who work to preserve the community’s history, and to “celebrate our history as a community of civic leaders and true pioneers as well as the people that move us forward with their imagination and creativity.” 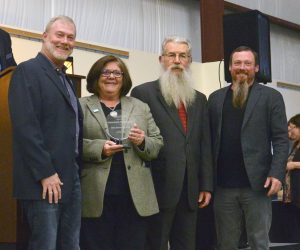 MSP was chosen due to the organization’s primary goals being historic preservation, economic vitality, design and organization for Perryville’s historic district. Some of its accomplishments include restoration of the Johnson Britton House, which now serves as the city’s visitor center and MSP’s office; and restoration of Parks Store, Green’s Drug Store, Kerrick Parks House and Dr. Polk’s House. 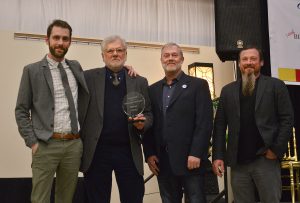 Ambrabev was chosen due to the company’s national footprint, which it has created in less than a year, through its blending, proofing, bottling, warehousing and shipping of spirits, made of Brazilian sugarcane. It opened The Still at its distillery home in Danville, a restaurant and bar, which also serves to showcase its products with the public.

The company is also creating a new line of cane-based gins to be released later this year, as well as an expansion of restaurant services. 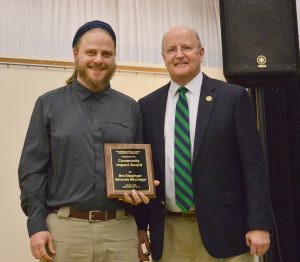 The Advocate-Messenger’s Editor Ben Kleppinger won the Community Impact Award, given to individuals or organizations “who respond to an identified need and initiate actions that affect people in the community in significant or profound ways. Those responsible for such efforts do not seek personal gain or notoriety.”

Kleppinger has received more than 15 first-place awards for journalism from the Kentucky Press Association, including most recently first-place for editorial writing. He also received a second-place award for investigative reporting from KPA, and in 2018, the Kentucky Association of Criminal Defense Lawyers gave him the Media Award for stories he’s done about jail overcrowding and financial bonds.

“By giving his voice to the social justice issues created by the use of financial bonds in particular, Ben and The Advocate-Messenger have not only informed our community but have created the necessary environment for positive change in our justice system and brighter prospects for many in our community,” the Chamber wrote in its program. 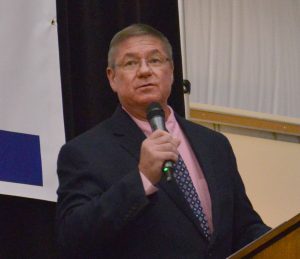 Board of Directors Award was presented to Joey Harris, and Hugh Hines (no photo available)

Hines capped off two three-year terms as director of the board, from ‘12-’18. He worked on the membership committee and on creating successful golf fundraisers as the chairman of the golf committee.

• Directors Award — David Phelps, Carol Webb-Marshall and Impressions: The Salon and Spa. The award is given “for going ‘above and beyond’ to offer help to support the Chamber’s many endeavors.” 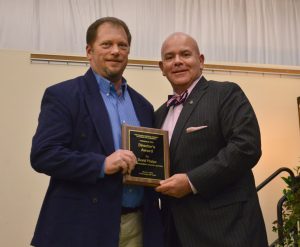 Phelps is system planning engineer for Inter-County Energy, as well as VP of engineering and operations, has completed the Leadership Boyle County program and has served on the chamber board for multiple terms. 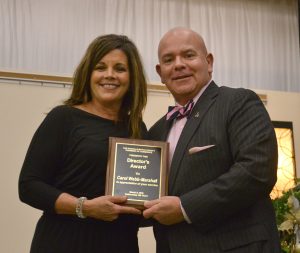 Webb-Marshall dedicates her time to the Danville Rotary Club, where she is a Paul Harris Fellow. She’s a current member of of the chamber’s board and serves on multiple committees throughout the year. 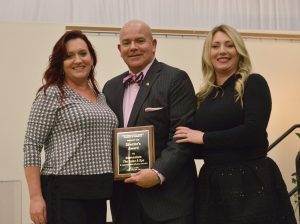 Director’s Award presented to Impressions the Salon and Spa, to Jeanna Hutchinson and Vanessa Mackey, by Johnson Pohlmann Insurance, by John Funkhouser

Impressions is a family-owned business, with the whole team taking “great pleasure” in volunteering for community events, from working the Ky. State BBQ Festival to the annual Christmas parade. 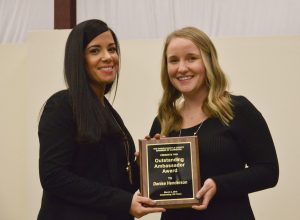 • Outstanding Ambassador — Denise Henderson. The award is given “for best exemplifying the work of the Ambassador’s Club, a core group of Chamber volunteers.”

Henderson’s philanthropic work throughout the years has made her an inspiration to the Chamber and other community members. She oversees non-profit fundraising as a development specialist for Ephraim McDowell Regional Medical Center; has raised money for Camp Can Do and Kids Can Do, and aims to publicize the importance of treating special needs children properly and making programs more affordable. 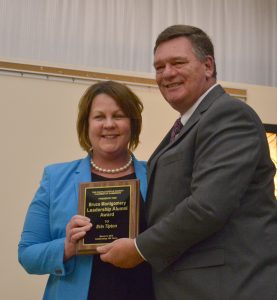 Tipton has been the campus director for Bluegrass Community and Technical College since 2009, and has had a key role in a number of local organizations. These include the chamber’s board; past-president of the Family Services Association; co-chair of the EDP’s Workforce Development Committee; steering committee member of the Boyle Industrial Foundation; and steering committee member and day chair for the Leadership Boyle County program. She has served on the Heart of Kentucky United Way investment panels. She recently accepted the position of system director of technical programs with the Kentucky Community and Technical College System. 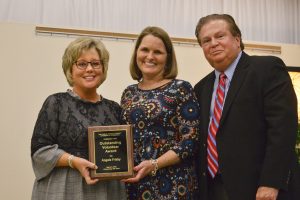 • Outstanding Volunteer — Angela Frisby. The award is presented “for dedicated community service to an organization or organizations in our non-profit community.”

Frisby is an ambassador for the chamber, and is chairperson of the Boyle County Youth Leadership Program. She also mentored two teams for the chamber’s Youth Entrepreneurship Class, and routinely helps with chamber events, including Business After Hours, ribbon cuttings, quarterly luncheons and more. She is also on the board for Habitat for Humanity, president of the Boyle Education Foundation, and serves on the project committee and Day of Action committee for HKUW. 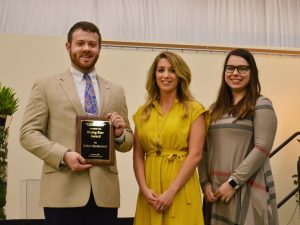 Southerland, assistant VP for Farmers National Bank, is the newly elected vice-chair of the chamber, and chair of the Challenge Foundation. He has served as a mentor to two teams and as financial advisor to every team in the chamber’s 2018 Youth Entrepreneurship class at Boyle County High School. 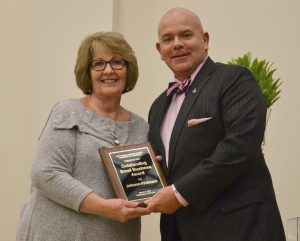 Founded more than 70 years ago, Johnson & Pohlmann was instrumental in helping create the Danville-Boyle County Chamber of Commerce Group Health program that has had tremendous success. 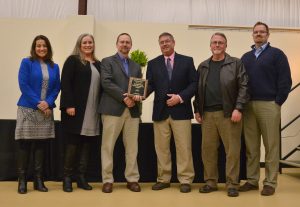 Denyo Manufacturing Corp. is the company’s only facility in the United States. Since purchasing the building from Clark Equipment in ‘95, production began the next year with a small group of people, making three small models of diesel-powered generators. 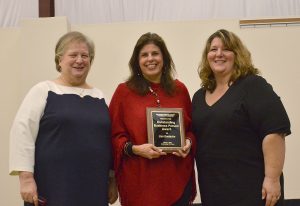 Knetsche and her husband, Robert, opened The Spine Center in 2008, which has grown to employing 15 people. Knetsche is a member of the Danville Rotary Club, and initiated the Rotary International Dinner, the club’s primary fundraiser. She served on the Rotary board for three years and was named a Paul Harris Fellow.

Knetsche has dedicated her time to the chamber’s board since 2014, and was its chair for two years. She also helped launch the Chamber Steel Shoot fundraiser, and was the acting representative on the EDP board for two years. 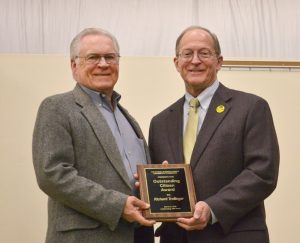 • Outstanding Citizen Award — Richard Trollinger. The award is presented to “those who have volunteered hundreds of hours to benefit their community and their fellow man.”

“The philanthropic work and contributions of Trollinger made in his 25 years as a member of the community are best described as transformative,” the Chamber program reads.

Trollinger was VP for college relations at Centre College before retiring in 2016, and President John Roush said his greatest contribution to Centre was the “creation of a culture of philanthropy.”

Trollinger is a member of the Danville Rotary Club. He has served as chair of the Kentucky School for the Deaf Charitable Foundation, and as a board member for the Wilderness Trace Child Development Center and the HKUW.

A special birthday cake celebrating the Danville Boyle County Chamber of Commerce’s 100th birthday is on display during the dinner and awards ceremony. Photo by Robin Hart.

Cindy Pendygraft Woolum visits with a friend during the Chamber’s annual banquet. Photo by Robin Hart.

A special birthday cake celebrating the Danville Boyle County Chamber of Commerce’s 100th birthday is on display during the dinner and awards ceremony.

Heidi Crutchfield laughs with a friend in one of the fancy, silver chairs in a seating area of the 100th Birthday Bash for the Chamber of Commerce Friday night.