Elizabeth Best was involved in the community

Editor’s note: Information for the article was taken from The Advocate-Messenger archives.

Elizabeth Hagan Best was a school teacher and played an active role in the 1960s and 70s community civic organizations and clubs in Danville.

She volunteered much of her time at the Danville-Boyle County Public Library where she served on the library board and was a member of the book selection committee.

She spent several afternoons a week doing odd jobs — preparing newly arrived books by wrapping them in protective jackets and placing them with library cards before adding them to shelves.

Former librarian Karl Benson remembered Elizabeth for her good sense of humor and said she always wore a hat.

Elizabeth was a member and former president of the Danville Garden Club and often brought fresh flowers to decorate the library.

When she returned from her travels to Europe, she talked about the places she visited. 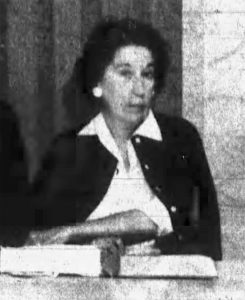 Photo contributed
Elizabeth Best was a school teacher who played an active role in the Danville community’s civic organizations and clubs during the 60s and 70s.

A former English and journalism teacher at Danville High School, she was educated at Centre College and graduated from University of Kentucky.

Elizabeth was a strict disciplinarian and students appreciated that and knew they could not pull the wool over her eyes.

Former students called her “a great teacher and one of the finest.”

She was a member of Centenary United Methodist Church and served on the board. She also was active in the church’s Wesleyan Guild.

She represented the Garden Club on the board of Central Kentucky Wildlife Refuge.

A secretary of Ephraim McDowell Memorial Hospital Auxiliary, she was co-chairman of the hospital auxiliary sewing committee.

Elizabeth also was secretary of Family Service Association board in the 1970s and was vice president of the Women’s Auxiliary of the Kentucky Hardware Association when her husband, P.H. Best was with Chestnut-Salter-Best Hardware Co. on Main Street.

Elizabeth worked with the United Community Fund of Boyle County for many years. She served on the publicity for many UCF campaigns. In 1964, she wrote a series of articles on the support agencies promoting the campaign which reached 100 percent of its goal.

She also was one of the leaders in the fund drive in 1963, and a member of Daughters of the American Revolution in Brandenburg.

Her husband was a native of Washington County and a former teacher and banker before coming to Danville to get into the hardware business.

He also was active in community affairs and at Centenary United Methodist Church. He served as a board trustee and was Sunday School Superintendent at Centenary more than 40 years.

From our files, March 9