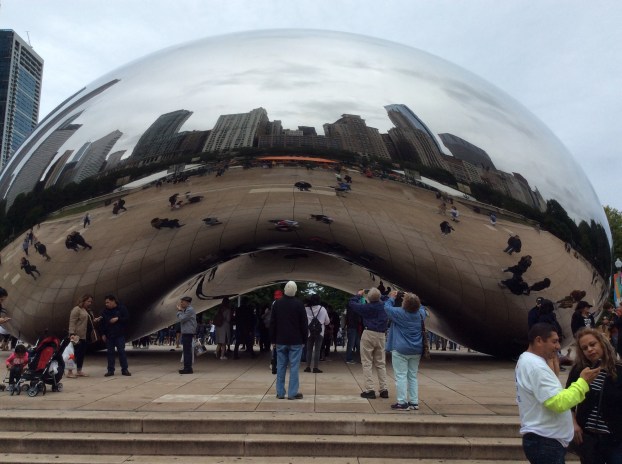 The Eklunds photographing the iconic "Bean" statue in Millennium Park in Chicago during a past trip with the Community Arts Center. Photo contributed.

“These lectures are a fun opportunity for our friends at Centre to share their interests and expertise with the community,” says Creative Director Brandon Long. 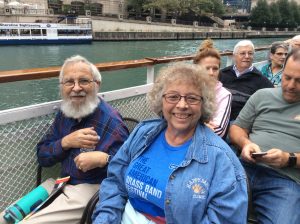 Neil and Ginny Eklund enjoying an architectural cruise on the Chicago River during a past art trip through the Community Arts Center. Photo contributed.

The series kicks off with a presentation by Dr. John Kinkade, Charles T. Hazelrigg Associate Professor of English at Centre College, at noon Tuesday. Titled The Rise of the Gothic, Kinkade’s lecture will explore the intersection of terror and wonder. Kinkade argues that cultural icons as wide-ranging as the Houses of Parliament, the novels of Charlotte Brontë, the paintings of Caspar David Friedrich, and Scooby-Doo all owe something to the Gothic, a cultural movement that emerged in the mid-eighteenth century and gave the world access to new ways of thinking about the dark, the sinister, and the weird.

Next up will be Dr. Stacey Peebles with a discussion of The Western as American Myth on March 19. According to Peebles, associate professor of English and director of the Film Studies program at Centre, the Western is America’s defining myth — the story that we tell when we want to tell stories about ourselves.

In her talk, Peebles will discuss the enduring popularity of this genre that has persisted from 19th-century dime novels about Calamity Jane and Billy the Kid to the Coen brothers’ newest film ”The Ballad of Buster Scruggs.”

On March 26, Stanley R. Campbell, director of Library Services at Centre, will present a talk titled Almost in the Air: Robert Johnson and the Blues. Johnson was an itinerant Blues musician in the 1930s with a taste for rambling, whisky and the ladies, married or not. He had recorded 29 sides in sessions in San Antonio and Dallas, yielding one national hit, “Terraplane Blues.”

And by August 1938, he was dead, murdered most likely, and buried in an unmarked grave. Robert Johnson was largely forgotten by the public for more than two decades until Columbia Records released ”King of the Delta Blues Singers” by Robert Johnson. No one even knew what he looked like although two confirmed photographs of Johnson would later emerge. Twenty-nine songs and two pictures are all we have of the artist who has become the single most important Blues artist in American culture.

Rounding out the series will be Dr. Stephanie Fabritius, professor of biology at Centre College, who also served as vice president for academic affairs and dean of the College from 2006 to 2018. Her talk on April 2 will focus on the aesthetics of birds.

The Arts Appreciation Lecture Series will be held noon-1 p.m. Tuesdays through April 2. Cost is $10 at the door. 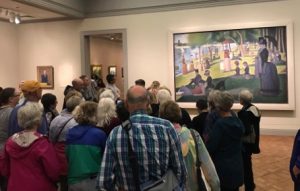 The CAC group enjoying a tour of the Art Institute of Chicago during a past trip. Photo contributed.

Building on the success of a trip to Chicago in the fall of 2018, the Community Arts Center is organizing an art-lovers adventure in New York City. Departing August 22 and returning Aug. 26,, the trip will explore museums, murals and more to provide a taste of the art and culture of the Big Apple. The registration fee ($1,695 per person assuming double occupancy) includes round trip airfare from Louisville, four night accommodation in a Park Avenue hotel, two meals and entrance to the Guggenheim, Metropolitan Museum of Art, and 9/11 mural – some with guided tours – as well as a tour of the famous Brooklyn murals.

The art trip also includes ample time for independent exploration of the city, with an unlimited bus/subway pass included in the registration fee. The trip will be led by Milton Reigelman, Centre College Professor Emeritus.

Ginny and Neil Eklund of Danville were among the first people to sign up and say they are very excited about the trip. Veterans of the Arts Center’s 2018 trip to Chicago, Ginny Eklund says “This occasion will provide a perfect celebration of our August 50th wedding anniversary as we explore museums, enjoy fine dining and hopefully attend a Broadway show with old and new friends from Danville, with no cares, thanks to the fine arrangements of Milton Reigelman.”

Full details about the trip, as well as an online reservation form, are available at www.communityartscenter.net/new-york-art-trip. A $500 nonrefundable deposit is required to secure a spot on the trip, and is due by March 17.

Out with the old, in with the new