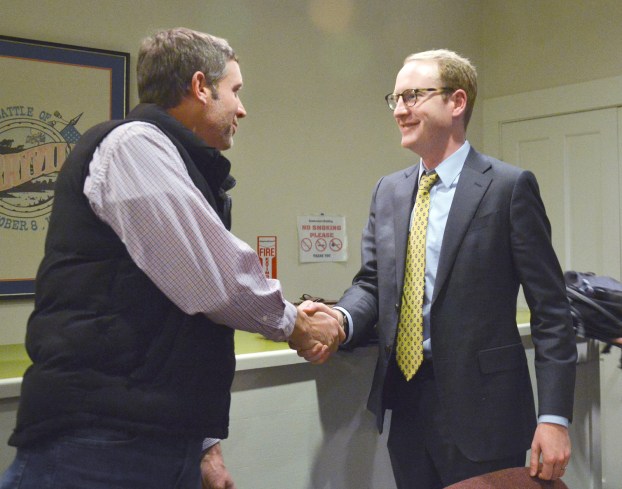 The Perryville City Council unanimously passed the first reading of an amended joint zoning ordinance for the county, Danville, Perryville and Junction City during its regular meeting Thursday night.

P&Z director Steve Hunter told the council this was the first phase in a two-phase update of the joint zoning ordinance.

“We’re basically trying to take a 17-year-old ordinance and bring it into the year 2019 so that maybe it will work for the next 20 years,” he said.

The first phase is “more legal stuff” like outlining general provisions, definitions and zoning processes, “and how to deal with stuff that is grandfathered in, that’s not conforming” to new zoning regulations, Hunter explained.

For example, today someone can purchase a small building and put it up in their backyard five feet from the rear property line. “But if you attach a building to your house, like an addition, it has to be 30 feet off the line. Why is that? It doesn’t really make sense.”

“Today, people use their backyards differently than they did 20 years ago,” Hunter said. “Today, they want buildings, they want gazebos, they want decks. They want to maximize their space. I think our approach is going to be let’s make these setbacks less burdensome. … Let them cover up their backyards with all kinds of buildings if they want, as long as they’re not really impeding on their neighbors.”

Another issue in the second phase will be where solar panels will be allowed. “We’re going to be thinking about what happens on someone’s lot that we weren’t thinking about 20 years ago.”

When signage is regulated in the new ordinance, Hunter said P&Z is going to put forth a proposal, “but if you guys want them taller, shorter or brighter, we’ll write the sign ordinance exactly what you think Perryville wants.”

This is your ordinance and it doesn’t have to look like Danville’s or the county’s,” Hunter said. “Danville wants them stricter. Danville doesn’t want billboards. You guys might feel differently. You guys might want high rise signs that spin in a circle and shoot out smoke. I don’t care. We’ll put in whatever you all want.”

In the meantime, Hunter suggested that the council begin talking to business and property owners to get a feel for what types of restrictions would be most beneficial for Perryville.

If the second reading of the first phase of the amended zoning ordinance is passed at the next council meeting, Hunter said it could go into effect in May.

Then the city would be on track to begin tackling specific ordinances regarding signs, single-family and multiple-family residential areas, and where short-term rental properties could be located within the town, Hunter said.

In other business, the council discussed how to handle a situation involving a business in the Perryville Community Center that’s behind eight months in paying the city rent, owing a total of $4,000. Councilman Chad Blackwell suggested that the city try once more to “reach out to the tenant to see their intentions” before taking action to terminate the lease.

The council agreed and City Attorney Winfield Frankel said he would send a “gentle reminder of rent due,” to the tenant.

Frankel also announced that he had sent a letter to the council on Feb. 18 announcing his resignation because he had accepted a position in Louisville starting March 18. “It’s very bittersweet. I’m going to miss Perryville,” Frankel said.

“These council meetings have been — they’ve been fun,” he said. “… It’s been a very fantastic experience for me. It’s been a lot of new experiences. I’ll miss it very, very, very much.”

Frankel said he had suggested to Mayor Brian Caldwell that attorney Stacy Coontz be hired to replace him as city attorney. “She’s outstanding. Just to be honest with council, she knows more about municipal law probably than most of the attorneys in the region put together. … She’s got local government running in her blood.”