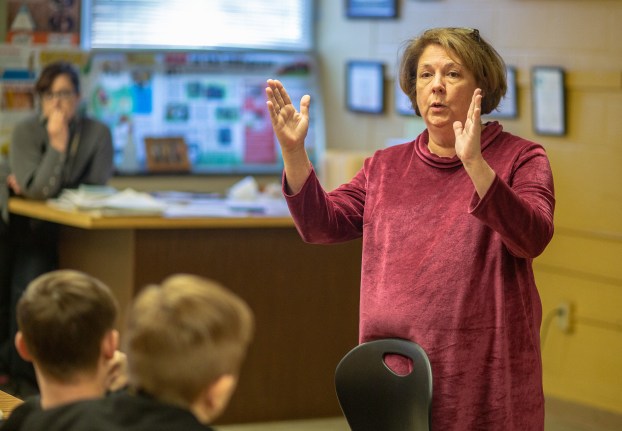 Ben Kleppinger/ben.kleppinger@amnews.com District Counselor Pam Tamme explains the ideas behind a proposal to drug-test students to a panel of around 20 high-schoolers last week.

The Boyle County School District is examining the possibility of subjecting high-school and middle-school students to random drug testing if they participate in extracurricular activities or drive themselves to school.

But before that happens, district officials are asking students what they think about the proposal; and they’ll be asking the community the same thing this Thursday.

“We’re trying to make it clear that this isn’t a done deal. We are still in a decision-making process,” said District Counselor Pam Tamme, who is heading up the Random Drug Testing Committee that’s looking into the issue. “The (school) board has the ultimate decision — not anyone else.” 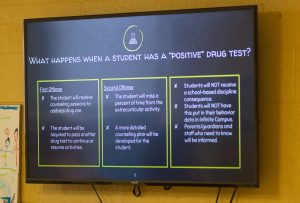 At 6:30 p.m. this Thursday, March 14, the community forum on possible drug-testing will be held in the Boyle County High School cafeteria, as part of the school board’s meeting that night. Tamme will be outlining the basics of the proposed policy and community members can sign up to comment and ask questions.

District spokesperson Stephanie Wade said the schools held multiple student forums with high-schoolers and middle-schoolers to explain what a possible drug-testing policy might look like and listen to students’ questions and input. Wade said the forums were also intended to  “clear up any misconceptions” about why the district is interested in drug-testing students.

“I think they had been misinformed that there would be immediate legal consequences, which is not part of the policy or proposal in any form,” Wade said. “And also, I think they were confused and misinformed on the purpose … I think they thought it was more like ‘gotcha;’ we want to catch as many people as possible and be punitive, when the discussions of our committee that will make the proposal really have been more of a preventative, of a deterrent.”

Wade said stories from Boyle alumni about what they were doing in high school and how their lives are now ruined by drug use in part led to the desire to drug test.

Students “may not have addiction issues while they’re here in our school system, but within a year or two, that recreational usage has turned to severe addiction,” Wade said. “We’ve gotten lots of questions from parents and community members — ‘What can we do to curb this? What can we do to deter them from ever using in the first place?’ I think ultimately, we felt like we could do more in that area for kids.”

Nothing is set in stone yet — the district won’t develop a real policy unless the board gives the go-ahead after this data-collection phase, Tamme and Wade said.

During one of the final student forums last week, Tamme attempted to sketch the broad strokes of a possible policy for a group of about 20 high-school students.

Students would be included in a pool to be possibly drug-tested each month if they drive to school or participate in athletics, extracurricular clubs or other optional programs.

Each month, a drug-testing company would randomly select a certain percentage of students from the pool to be drug-tested.

Tamme told students positive drug tests would be treated differently than if a student shows up to school intoxicated or high, because the drug tests show if someone has used in the past 30 days.

“We don’t press charges; we don’t expel you; we don’t do any of those things,” she said. “We don’t even put a behavior even in infinite campus on this. What does happen is in order to continue driving and/or participating in the activity, you and your parents would agree to a certain amount of counseling sessions.”

Tamme said students who test positive would also then be subjected to mandatory drug tests every month for a year.

“If you failed again, that would be your second offense,” she said. “Then you start to miss time from the activities you do.”

“Individual counseling plans” would be developed for second-offense students “because now you’re looking like you’re a pretty regular user at best,” Tamme said. “This is like where it all starts, often, or it could. We’re just trying to postpone that by doing this. Is it going to be perfect? No. Is this going to stop everybody? No. Could it help? We believe it could help. Do we know that yet? No. Do other districts say it helps them? That’s the feedback we’re getting.”

Wade said 103 out of Kentucky’s 172 school districts subject students to drug-testing in some manner. “But we want to make sure we’re doing more and what’s best for our kids, not necessarily what other districts are doing.”

Tamme said many students asked about how much drug testing could cost the district and what else that money could be spent on. The cost is estimated between $10,000 and $15,000 annually; students were told the money would come from federal grant money that wouldn’t be available to use for anything else.

Another student added, “I don’t really care if they drug-test students, but you’ve got to drug-test the staff, too.”

Tamme said the district is also working on developing a policy for drug-testing staff members.

Another student began a criticism of the proposal with, “Whenever you guys start these drug tests —”

“— If we even do; it hasn’t been passed,” Tamme interjected.

Multiple students responded that they believe it’s essentially a done deal — that the policy is certain to be put into place.

After the forum was over, Tamme said that reaction didn’t occur in any other student forum.

“They were like, ‘Oh, it’ll happen.’ Which basically was their way of saying, ‘Adults are going to get what they want regardless of what kids want,’” Tamme said, before reiterating that data is still being gathered and there is no set timeline for implementing drug-testing.

At the end of the student forum, one more student added a comment: “You guys won’t have anybody to play a sport.”

“I would rather have a healthy student than a star athlete,” Tamme responded.

Boyle County Schools will hold a public forum on a possible student drug-testing policy at the Boyle County High School cafeteria at 6:30 p.m. on Thursday, March 14.

Danville-Boyle County Chamber of Commerce awards individuals, businesses who have made mark on community