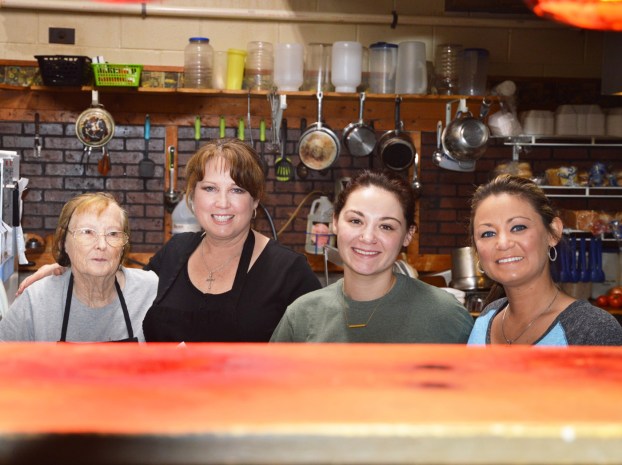 Red Rooster owner Angela Curtsinger, second from left, stands with her mom Anna Miller, left, grandaughter Reana Harmon and daughter Jessica Conder pose together in the kitchen, behind the pick-up window. Curtsinger says she loves the fact she is able to work with her family. Photo by Bobbie Curd.

Anyone who’s familiar with Danville knows the Red Rooster Cafe. It’s where many locals might tell you to go eat if you’re craving home-cooked comfort food that reminds you of your grandma’s dishes.

“That’s probably the biggest compliment I ever get,” says owner Angela Curtsinger. “When someone says that reminds them of their grandmother’s chicken and dumplings, or they eat something they haven’t had in a long time and it reminds them of someone special — I love that.” 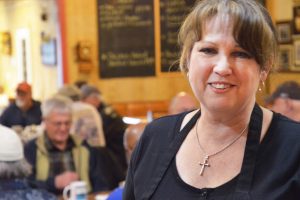 Angela Curtsinger originally bought Red Rooster in 2003, when it was Perry’s Cafe.
Photo by Bobbie Curd

Curtsinger originally bought Red Rooster in 2003, when it was Perry’s Cafe. She had been working night-shift at a factory, then went through an incredibly rough time in her life; she lost her husband and her son within a year of each other.

“I wanted to get into something to keep me busy, keep me occupied. And I was missing my children and grandchildren,” she says. She definitely nipped both of those desires in the bud.

Red Rooster is open seven days a week. Curtsinger and her daughter do the cooking, and her grandchildren work shifts, too. On any given day, customers can find five generations of Curtsinger’s family at the cafe.

“My mom also comes in and works. She’s almost 80, so she has my permission to do whatever she wants …” Curtsinger says and laughs. “I guess I did get my work ethic from my mom.”

She loves that she works with her family every day, which was the purpose of buying the restaurant in the first place.

“They may not always enjoy that, but I do,” Curtsinger says.

Tuesday, around 9 a.m., Curtsinger is just able to take a breath. The crew had just finished with the big early-morning rush, but one long table full of men was still active.

“I’m telling you — any single women need to start coming here on Tuesday mornings,” Curtsinger jokes. She says the place was packed wall-to-wall with all male customers.

Although she had no restaurant background, other than working fast food when she was younger, her grandmother did own her own restaurant. “That’s kind of where I got my desire …”

Curtsinger gets up at 3:45 a.m. every morning; the cafe is open 7 a.m.-3 p.m. daily, except for Sundays when they operate from 8 a.m.-2 p.m. Although Red Rooster only serves breakfast and lunch, that’s enough to keep her extremely busy. 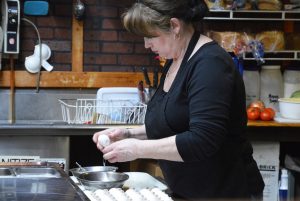 Angela Curtsinger, owner of Red Rooster Cafe, returns to the kitchen after the early-morning breakfast rush. She and her daughter both cook for the restaurant. Photo by Bobbie Curd.

But Curtsinger loves to cook. She hears the most about their homestyle burgers, meatloaf, Kentucky hot brown, fried green tomatoes … They serve tenderloin and casseroles; they get requests from customers, too, which they often oblige, so the menu can change daily.

There’s always a buffet, which they cook non-stop to refill, as well as some regular menu items.

“My favorite thing to make is cakes and pies — peanut butter, chocolate … I do it when I can, but not as much as I’d like to. If I have someone say ‘Will you make me this pie, my mother used to make me this,’ I just love that.”

Curtsinger has sold the business twice — this is her third time returning. “It just didn’t work out the way they wanted it to,” she says. “And I missed it. It’s been that way both times I came back.”

Although she loves to cook, working with the public is by far, she says, her favorite part of the job.

“I love the people. I love the noise, the commotion. I love it all. I generally love what I do.”

Something she doesn’t look forward to is that old adage anyone in the service industry will offer: You can’t please everyone all of the time, and some none of the time.

“There’s times when you just can’t make someone happy. And you have to learn not to take it personally, and it’s been the hardest thing for me,” she says. “I used to get broken-hearted, it’d just destroy me if someone didn’t like something they ate. Now I realize I have to just think what I can do to make it better, how can I fix it.”

Probably what most would be surprised to know about her job as a cafe owner is all the balls she has to juggle, usually at one time. If she’s not cooking, she’s ordering supplies or dealing with so many other needs, she can’t even list them all …

Curtsinger took her mom’s wisdom to heart: “She said the secret (to living a long life) is don’t sit down. I’m going to take her at her word.”

In five years, she still sees herself at the Red Rooster.

“I do think I’ll be here. I hope so,” Curtsinger says. “I have a granddaughter who’s decided she wants to run it if I ever quit again. I think she can, too. So I think it does run in the blood.”

Kate Snyder said the opening reception for the annual Student Showcase exhibit at the Community Arts Center is one of... read more