Upon finding them, I explained just what they were to auction-goers. I did some research and many books spoke of coin silver, sterling and pewter marrow scoops. I never found any reference to blacksmith made. I researched on the internet and nothing was ever found.

Early iron was very expensive in pioneer Kentucky. My speculation is that a blacksmith made these for his own family. Native Americans valued marrow for its nutritional value. Anyway, please let me know if this email and picture reaches you. Best regards.

Answer: You are indeed correct. You have two bone marrow scoops, or at least one scoop and one tiny, long handled spoon. However, in all fairness, they likely used this spoon the same way.

Bone marrow, for those who aren’t food enthusiasts, is a wonderful source of nutrition, vitamins, protein and flavor. It’s hard to find in a modern day grocery store. It seems as though the further meat is from being associated with an animal, the better. And that’s terrible, as marrow is so delicious. 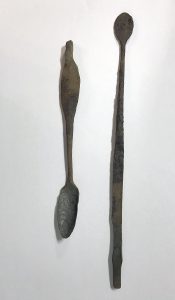 As you can imagine, marrow in a big bone is hard to reach. Today, many restaurants are able to split the bone length ways making it much easier to get to the succulent marrow. In older days, this was not so easily done. To remedy that, a silversmith invented a long, shallow cup shaped spoon or scoop. A diner could then easily spoon out the marrow.

You know, I thought that I could go right to a source for this one. Oh sure, I found scads of online references and comps, for fine English silver, American coin silver, pewter, brass coated with tin and even modern examples in aluminum. I did not find anything in wrought or cast iron. I checked in all of my iron reference books. I was at a loss until I happened upon a magazine article by Mary Earle Gould.

For those who don’t know, Mary E. Gould way back in the 1940’s was the queen of country American antiques. Check out her books if you have a serious interest in this subject. To summarize it, she said that she was always amazed at what she found in estates, that had been made by skilled and dedicated craftsman who had a need but no supplier.

In early America, cast and wrought iron was expensive, mostly due to the taxes and tariffs placed on the raw materials, but it was available. Almost every town had a local blacksmith. As with any craftsman, some were talented and some were not as talented. And let’s face it, any iron wares were by far much cheaper than imported silver. We have to remember that necessity is the mother of invention.

This only goes to support your thoughts that these scoops were made by a local craftsman, likely for his own needs. I feel that these wrought iron marrow scoops were handmade in America. I have to think that being more utility-minded, they would have been kept in the kitchen, as opposed to a formal dining room.

Dating is a different matter. I think based upon the actual shape and use of these items, it’s going to date them early. I’m thinking 1790s to 1800. I would do some research on the family that was selling these at auction. It might help establish a provenance. They are wonderful, early and rare. Bear in mind that doesn’t always equal high values. The condition is a tad on the rough side.

I wonder if they were dug up at one time? But they have been moved up from object to that of artifact. I love them. I think that at a serious antique show that they would be priced for about $200 for the pair. This could greatly increase if you have any luck with establishing a family name or state.

Elizabeth Best was involved in the community

Editor’s note: Information for the article was taken from The Advocate-Messenger archives. Elizabeth Hagan Best was a school teacher and... read more