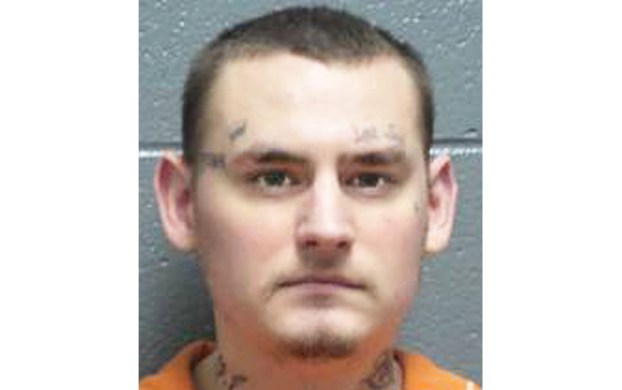 A Danville man was arrested Monday while allegedly in possession of several stolen items, including a Danville High School State Championship ring that he was wearing.

Jacob T. Gordon, 26, of Danville, was seen rummaging through a vehicle parked on East Broadway near Kentucky Utilities, then walked toward Main Street, according to a witness, said Danville Assistant Police Chief Glenn Doan. When police responded to the area at 1:34 p.m., they found Gordon on Martin Luther King Boulevard near CVS behind some trash cans, Doan said.

Gordon refused to follow police commands to get on the ground, thus causing a disturbance, Doan said. After taking him into custody, police found that Gordon was in possession of money and identification cards belonging to the car theft victim.

At the same time, officers and a detective were at a building adjacent to Danville High School, where the weight room is located, and were processing the scene of a burglary that they believed happened at about 1 p.m., Doan said. Security cameras showed a man fitting Gordon’s description in the area, he said.

The perpetrator had entered the basement and pried open two interior doors.

Taken in the burglary were three laptops, a hard drive, a backpack, three DHS football state championship rings and several items of clothing.

Police located a cellphone in Gordon’s possession and when they contacted the owner, they discovered it had been stolen too, Doan said.

Gordon had all of the items inside the backpack he had allegedly just stolen, Doan said. Gordon was even wearing one of the rings when he was arrested, he added.

Police believe Gordon may have been under the influence of methamphetamine, Doan said.

Gordon was charged with third-degree burglary; theft by unlawful taking from a building or property valued between $500 and $10,000; third-degree criminal trespassing; first-degree criminal mischief; theft of contents from a vehicle; second-degree disorderly conduct; resisting arrest; public intoxication; possession of drug paraphernalia; and first-degree possession of a controlled substance suspected to be meth.