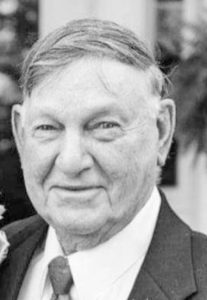 Robert Rudolph “Bud” Wyler, 88, of Stanford, Ky., passed away Saturday, March 16, 2019 at home. Born December 9, 1930, in Stanford, Ky., to the late Christian and Matilda Laudemann Wyler, and he was the widower of Anne Hackley Wyler. He was a United States Navy veteran and a lifelong farmer, earning “farmer of the year” in 2015. He served on the Lincoln County Dairy Committee, the Southern States Advisory Board, was a member of Farm Bureau, and a member of Hebron Lakeside Church.

In addition to his parents and wife, he was preceded in death by two brothers, Albert Wyler and Fred Wyler; and three sisters, Margaret Alford, Ida Mae Gover, and Elizabeth Cooper.

Visitation will be Monday, March 18, 2019 from 6-9 p.m. at Spurlin Funeral Home Chapel, Stanford. Funeral service will be 11 a.m. Tuesday, March 19, 2019 at the funeral home with Reverend Robert Camenisch officiating. Burial will follow at Danville Memorial Gardens.

Memorials in lieu of flowers may be given to Hebron Lakeside Church, 27 Boone Road Cutoff, Stanford, KY 40484.