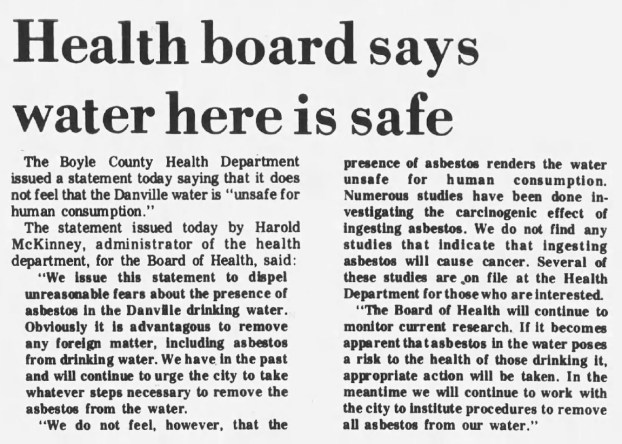 Advocate-Messenger archives An article in the March 21, 1979, Advocate printed a statement from the health department concerning the presence of asbestos in Danville's drinking water.

Front Page History 1979: Danville was dealing with asbestos in its drinking water

On this day in 1979, the Boyle County Health Department was on the front page of The Advocate-Messenger, encouraging the public to continue using their drinking water, despite the presence of asbestos.

“We issue this statement to dispel unreasonable fears about the presence of asbestos in the Danville drinking water,” said then-health department administrator Harold McKinney. “Obviously, it is advantageous to remove any foreign matter, including asbestos from drinking water. We have in the past and will continue to urge the city to take whatever steps necessary to remove asbestos from the water. We do not feel, however, that the presence of asbestos renders the water unsafe for human consumption.”

The statement went on to claim that studies on the carcinogenic effects of asbestos did not indicate that ingesting asbestos would cause cancer.

“The Board of Health will continue to monitor current research,” the statement continued. “If it becomes apparent that asbestos in the water poses a risk to the health of those drinking it, appropriate action will be taken. In the meantime, we will continue to work with the city to institute procedures to remove all asbestos from our water.”

The statement may sound surprising today, given how well-known asbestos is for causing cancer when inhaled. But links to negative health effects from ingesting asbestos are in fact less clear.

Accompanying the health department’s statement on A1 of the March 21, 1979, Advocate was an Associated Press article about the National Cancer Institute’s effort to investigate the potential health effects of asbestos in Kentucky.

“Although there’s no conclusive scientific proof that people who drink water containing asbestos increase their risk of getting cancer, there’s a lot of evidence to suggest it,” the paper reported, citing Birney Fish, director of cancer prevention at the McDowell Cancer Network. “In fact, there’s enough suggestive proof that ‘simple prudence’ dictates that prompt remedial measures should be taken at water supplies showing elevated levels of asbestos, he said.”

According to the article, water samples suggested that the asbestos in Danville’s water “comes from industrial waste produced by a local automotive parts manufacturer … but Fish said more proof is required.”

In 2001, the U.S. Agency for Toxic Substances and Disease Registry issued a public health statement on asbestos, which in part stated, “The health effects from swallowing asbestos are unclear. Some groups of people who have been exposed to asbestos fibers in their drinking water have higher-than-average death rates from cancer of the esophagus, stomach, and intestines. However, it is very difficult to tell whether this is caused by asbestos or by something else.”

In 2002, the World Health Organization stated that “little convincing evidence has been found of the carcinogenicity of ingested asbestos in … populations supplied with drinking water containing high concentrations of asbestos.”

According to information originally released in 2014 from the ATSDR, “most ingested asbestos fibers pass through the gastrointestinal tract unchanged and are cleared in the feces.”

• An obituary was published for Mrs. Celia B. Henson, 84, the owner and operator of the Henson Hotel. “Survivors include Eben C. Henson, former Danville mayor and producer of Pioneer Playhouse, and a daughter-in-law, Charlotte Hutchison Henson, also of Danville … and seven grandchildren, including Eben, Robert, Holly and Heather Henson, all of Danville.”

Boyle County Courthouse bailiff a jack of all trades

Every time someone enters the Boyle County Courthouse — whether to renew a driver’s license, check on a deed, pay... read more