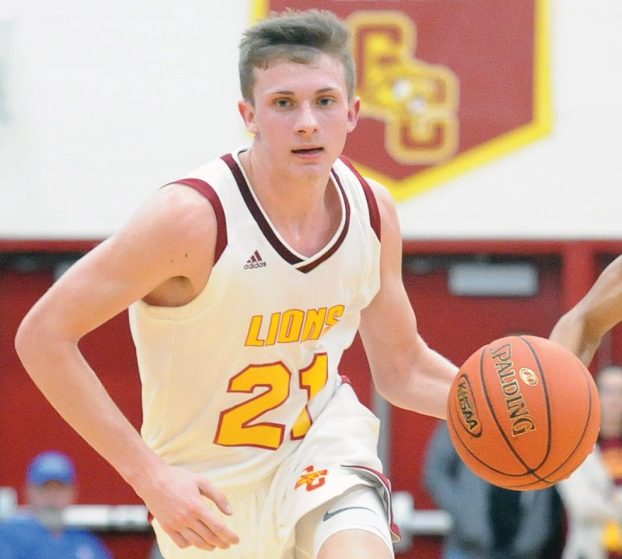 There were times this season when Garrard County head coach Ryan Young would look to his assistant coaches and shrug.

He wasn’t upset. He was amazed.

Sebastian’s junior year was arguably the best in Garrard County school history: His father, Rusty, is the only other player in Garrard’s history to lead All-Area voting, when he averaged 21.4 points and 13.8 rebounds per game.

“One of the biggest reasons why he had so much success this season is that he really bought into what we were doing in the weight room,” Young said. “I think it just carried over because not a lot of people would’ve been able to carry the workload that he had to carry for us this year. As a former player and a coach, sometimes I would just catch myself watching him and look to an assistant and say, ‘is this really happening?’”

That’s not really how Sebastian saw it — he’s the type to let his game do the talking, and he wouldn’t go into a game trying to score 40.

He scored at least 40 points as many times as he scored under 20 this season, and he never finished with fewer than 10 points in a game.

“It just goes back to hard work, putting work in and wanting to be the best,” Sebastian said. “Class doesn’t really matter, just whoever you are, freshman/sophomore/junior/senior, just go out there and perform. I feel like that’s what I did.”

Scoring at such a prolific clip isn’t easy, particularly when your team is averaging 65 points per game. But Sebastian made it work, in a tough district as the focal point of opponents’ gameplans.

“We definitely hit the weight room hard,” Sebastian said. “I think that’s good for me, good for our team to get us stronger. Coming into this next season, that’s my main goal is to get bigger and be more physical with people. That really helped me this year, getting stronger. That helped me finish more.”

Sebastian’s strength was critical to his success: He went to the line more than any other player in the region, and converted free throws at an 85.5 percent clip. Among the state’s top 50 free throw shooters by percentage, Sebastian leads them all with 276 attempts and 236 made.

And that’s while playing just 25 games: He averaged just over 11 trips to the line per game.

There’s no doubt Sebastian took a beating this season, but his body was ready for it. He also finished among the region’s best in field goal percentage (56.7) and three-point percentage (47.8).

Despite all that shooting, his coach said that the biggest improvements have come on the other side of the ball.

“When he came in as a freshman, he’ll be the first one to tell you, it was a big learning curve about what he needed to do defensively,” Young said. “We always knew, I knew when he was an eighth-grader that he was going to be fine offensively, and that shows with his numbers. What a lot of people don’t see is how much he’s improved on the defensive end of the floor.

“That’s one of the big things we’ve worked on in the offseason and through practices, just staying in a great stance. He’s improved his overall athleticism.”

There’s still room for Sebastian to improve: He said he wants to improve his ballhandling skills this offseason (this was his first year as the primary ballhandler) and continue to get stronger.

Young said he also wants to see more of a vocal leadership from his star.

“There’s different forms of leadership: You can be the rah-rah, get in people’s faces, you can be the silent killer, which is what he is,” Young said. “You know he cares because he’s there, he shows up and puts in the extra work. I think the next step for him is holding his teammates more accountable. They need to hear him vocalize his internal feelings more. We want him to take the reins this coming season, let it be his team and his destiny, put Garrard County all the way back on the map.”

Sebastian said the past year couldn’t have been done without his teammates, and it’ll take a team effort again next season.

“It’s always the next man up, be ready to strap it up and go,” he said. “My teammates last year just really believed in me and that helped me keep going, keep pushing.”

Karson Thompson brought the heat and the offense on Tuesday against Mercer County. The junior led Boyle County to a... read more