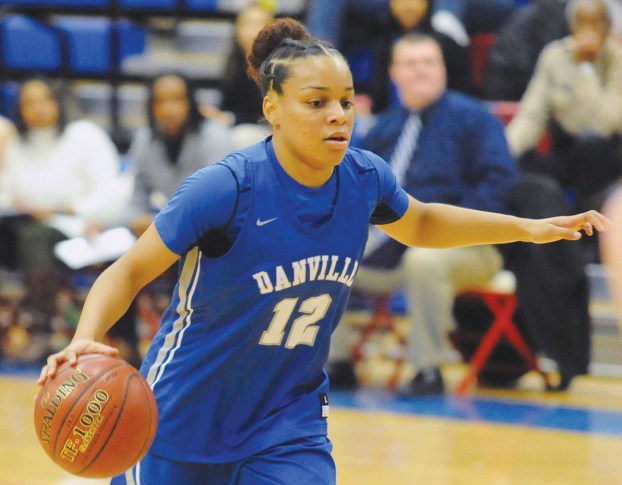 Whether it’s scoring 40 points in a game, leading her team with a triple-double, talking to a sixth-grader on the bus.

Turner led a 24-win season for Danville this season and set the school record for total career points. She averaged 25.9 points per game — sixth-best in the state — and eight rebounds per game, a team high.

“That’s just Ivy,” Danville head coach Judie Mason said. “If people could see how she really is, it’s what a true athlete is all about. When she does it, she does it at the highest level. She competes, she wants to win, she wants everyone to be happy. She truly cares about her teammates. I’d like to coach her a couple more years. She’s one of the most humble kids I’ve ever been around.”

Turner doesn’t like talking about herself — ask her what awards she’s won and she would have to look in her bedroom to list them all off — but the accolades she’s received, she’s earned.

She represented Kentucky in the junior all-star game last year and will be on the list for Kentucky/Ohio and Kentucky/Indiana all-star games this year. She’s been an All-Area first team member for all four years of high school.

But ask Turner to talk about her coaches — Mason was her third in her high-school career — or her teammates, and she opens up.

“We really played as a team this year,” Turner said. “I did my part, my teammates did their job. I think we just came together, at the beginning we were a little rough but we came together and I think that’s what made it special for us.”

Of course, Turner was a key ingredient in what made the Admirals’ season successful. She was face-guarded and double-teamed relentlessly but never slowed — her season-low scoring output was 12 points, the first game of the season. Three times she scored over 40 points this season, including memorable wins over Lincoln County in district play and a first-round region upset against Mercer County.

“Ivy was such a leader, not vocally, the way she came to practice every day,” Mason said. “She played with sophomores, freshmen, eighth graders. She was the mother of the team and had to do all of the scoring. It was an honor to coach her and she’s one of the best I’ve coached, I’ve done it 32 years.”

And Turner credited those younger teammates for her success: They stepped up and helped her lead Danville to a 24-win season.

“They all did, they all showed up and did their job, shot the ball, rebounded well,” Turner said. “They’re really good teammates and it was a real pleasure playing with them the last few years.”

Mason added that the end-of-year awards — she also won area coach of the year — are about the team, and it’s the team that made for a successful season.

“They all know how good Ivy is, we can’t keep that a secret,” Mason said. “The beauty of it was, they allowed her to be Ivy. There was never any jealousy, never ‘I want my shots.’ That’s because of her personality. They would spend 24 hours a day with her if they could.”

Turner credited Mason’s coaching with helping the team grow this season, and both said they have a great relationship. But there was one defining moment in their relationship that showed Mason that she could turn the keys over to her star player.

Against Clay County in the Berea Holiday Classic on Dec. 28, Mason grilled Turner during a timeout and told her she shouldn’t be walking the ball up the court.

“It was a timeout, I don’t think we were playing good, and I said ‘I’m not walking the ball up the court,’” Turner said.

Mason and Turner both laughed through the memory of that timeout, and Turner said she was quick to apologize for snapping at her coach.

“I knew she was going to yell at me at halftime so I thought, ‘I’ll just say sorry about it now,’” she said.

But it was that moment that Mason knew, without a doubt, that Turner was ready to lead.

“When she apologized, that’s when I knew I could coach her. I trusted her, she trusted me,” Mason said. “Ivy and I have always had a good relationship, ever since she was in first/second grade. We’ve been in the schools, her older brother was here and was one of my favorite kids. I’ve always known her.”

Turner is also happy to talk about her biggest supporters: Her family. She credits her brother Jakobi for helping her toughen up against him and his friends.

“Yeah, he’d always say, ‘did I show you that move?’ I’d say yeah, but he just wants his credit,” she laughed. “I played with him and his friends, just playing against them in the offseason.”

Her No. 1 fan is her twin sister, Ina. Ina stopped playing sports in high school but attends everything with her sister.

“She’s her No. 1 supporter,” Mason said. “Ina is going to go with Ivy wherever she goes, Ina goes with her over the summer, she’s always there and is her No. 1 fan. That’s special.”

“They just keep me focused, keep me humble,” Turner said of her family. “They’re always there for me and I love ’em.”

What will she remember about her prolific high-school career?

He’s had to adjust to a vastly different role than he had at Mercer County last season when he won... read more