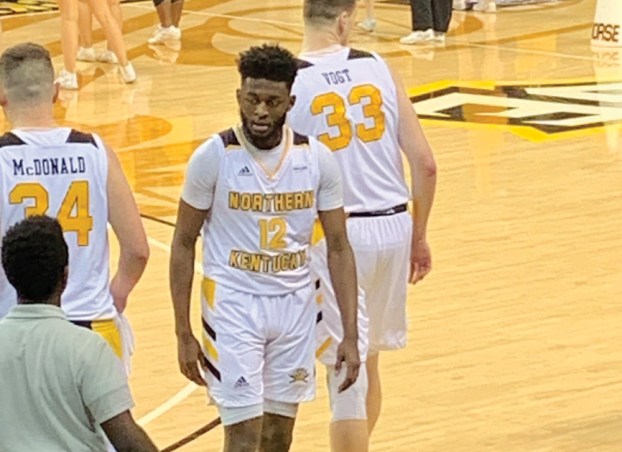 He’s had to adjust to a vastly different role than he had at Mercer County last season when he won Mr. Basketball honors, but Trevon Faulkner has made a nice transition.

The Northern Kentucky University freshman’s primary role has been as a defensive stopper and will be again Friday night afternoon when Northern (26-8) plays Texas Tech (26-6) at 1:30 p.m. EST in Tulsa in NCAA Tournament West Region. The game will be shown on TNT.

Northern beat Wright State in the Horizon League tourney championship game to earn the NCAA bid after splitting with Wright State during the season.

“He is really excited. Every kid who plays basketball dreams of going to college and making a tournament, especially the NCAA. He was really, really excited when they won the tournament,” Hamlin said. “For him to be a big contributor like he has been all year is a freshman is just a testament to his ability and how hard he has worked.”

Faulkner had a season-high 20 points in the conference tourney opening win over Detroit Mercy. Hamlin, assistant coach Brian Pendygraft and athletics director Donald Smith all went to Northern Kentucky to see that game. The Mercer coach watched the tourney semifinals and final on TV.

“With a new (2-month-old) baby, it’s hard to travel too much,” Hamlin said. “My wife had mapped out a plan if Northern got to play in Columbus (Ohio), Columbia (South Carolina) or anywhere close (to Harrodsburg) we were going to the NCAA but Tulsa is a little too far for us. We’ll just watch on TV and I can’t wait.”

Texas Tech, which reached the Elite Eight last year, is the region’s No. 3 seed, won 11 of their last 12 regular-season Big 12 games and shared the league title. The Red Raiders are one of the nation’s top defensive teams giving up just 59 points per game.

“They are right up there defensively with Virginia,” Hamlin said.

Tech’s best offensive player is sophomore Jarrett Culver, who averages 18.5 points per game and shooting 48 percent from the field. He’s made 42 3-pointers and is projected as a possible top five pick in the upcoming NBA and a consensus top 15 pick in mock drafts.

Hamlin noted that Faulkner’s AAU experience could help him with this matchup. He had to guard Kentucky freshman Immanuel Quickley in AAU play one game after he went against Duke freshman Zion Williamson, the consensus No. 1 pick in every NBA mock draft.

“Culver is a really athletic wing. I assume Trevon will get first chance to guard him and it will be a great barometer for him to see how far he has come this year,” Hamlin said. “But in AAU play he had to guard Zion Williamson and then Quickley. He has guarded the best perimeter player on the other team most of the season. That’s been his role and he’s enjoyed taking on the best offensive guards every game.”

The 6-4 Faulkner was a prolific scorer in high school but Hamlin says Northern has plenty of offense led by Drew McDonald, the school’s all-time leading scorer. He averages 19.1 points per game and shoot 48 percent from the field. He had 67 3-pointers.

“Offensively they are talented. That’s why Trevon has not really been asked to score like he did in high school,” Hamlin said. “But in the first round of the Horizon League tournament, he showed he is still capable of scoring.”

Hamlin talks to Faulkner three or four times per week. The coach says Faulkner is excited about playing in the NCAA. Hamlin says he’ll be both excited and nervous watching his former player perform.

“It’s hard to put into words what this means,” Hamlin said. “I have had a really good two years as a head coach with a Mr. Basketball and then another (12th) region player of the year (Carter Baughman). Now I have a kid who will be starting a NCAA game. To see him on this big stage is going to be incredible. I kind of pinched myself the other night when I heard (ESPN analyst) Fran Fraschilla talking about Trevon being an impact player as a freshman.

“Win or lose this game, he has made a lot of people here really proud. A bunch of people have contacted me about how to watch the game. He means a lot to our community. People follow him and hope he will be successful.”

No one supports him more than Hamlin’s 2-year-old son, Knox.

“Knox loves talking to Trevon. Every game that comes on TV now, he thinks Trevon is getting ready to play,” Hamlin said. “That’s been pretty cool for Knox but Trevon has always been great with him and now we get to see him play in a NCAA game on TV. I’m a lot older than Knox but I’ve got to admit that is going to be pretty cool for me, too.”

There were times this season when Garrard County head coach Ryan Young would look to his assistant coaches and shrug.... read more