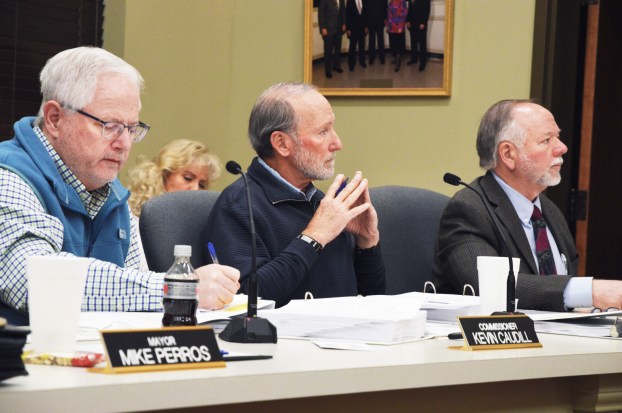 Editor’s note: This is the first in a series focused on agency funding requests made to the City of Danville for fiscal year 2019-20.

Mayor Mike Perros reminded community agencies Thursday: “We said three years ago to begin to expect a reduction in agency contributions because of an ever-tightening budget situation.”

That warning came before the state of Kentucky began to address the pension crisis, he added.

The city has over $1 million in funding requests in front of it this year, and nine agencies were asked to appear and make their cases for those requests. But first, Perros bluntly shared his frustration over the trickle-down effect of the poorly managed Kentucky Retirement Systems’ pension funds.

Danville is being required to increase its pension payments in amounts that will eventually equal $1 million annually as well to help make up shortfalls in funding, he said.

Kentucky’s public pension fund is now known as one of the nation’s worst, not only due to years of insufficient contributions by state leaders, but unrealistic goals on investment returns and payroll growth.

“We don’t have an answer to that problem. That is what we’re facing. The problem is in Frankfort,” Perros said, and not at the county courthouse or city hall. “This issue is in Frankfort. They have the luxury of being able to say and do whatever they want to say and do, and leave us with the problem to solve.”

Perros urged the community to contact legislators to help “avert this issue for us.”

City Manager Ron Scott said the city and county have paid their share of pensions all along, “but the challenge is that the administrative decision in Frankfort is to increase those rather substantially in a four-year cycle, upwards of 12 percent every year …”

Scott said the plea to the public is to contact legislators and ask them to “ease off on the additional contributions they’re requiring, because it is cramping our style in terms of what we can do locally.” 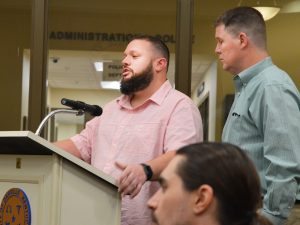 Shepherd’s House Program Director Roger Fox and CEO Jerod Thomas speak to the Danville City Commission Thursday. Fox and Thomas explained what they planned to do if the city granted them the $20,000 they are requesting in funding, and how they would expand the program. (Photo by Bobbie Curd)

Roger Fox and Jerod Thomas, the program director and CEO, respectively, of Shepherd’s House requested funding for the first time from the city, in the amount of $20,000. The program previously only worked with inmates from Boyle County Detention Center who met criteria to take part in the non-residential drug treatment program, but has since opened its doors to the general public.

Fox spoke first-hand about how beneficial Shepherd’s House has been to his life. “It helped me gain sobriety, go to work for the first time and gave me the mental health treatment I desperately needed.” Fox is a former drug addict who took part in residential treatment Shepherd’s House offers in Lexington after he was released from prison.

“Barry was in a panic, and I said, ‘Do you want me to sympathize with you or do you want me to help?’” Thomas said. “I pulled out all of the files, and of those 417 in the county jail, I pulled out 265 files of those diagnosed with substance abuse disorder … The jail is now at 207. We pulled them out 20 at a time.”

Fox said since the Danville location opened in 2017, it has graduated 52 of 165 participants. Of those graduates, he said 75 percent of them are not getting rearrested and are going on to be gainfully employed, primarily in Danville, adding to the local tax base.

They presented data showing the cost of incarceration versus treatment. Clients spent a total of 19,110 days in the program at a cost of $14 a day, totalling $402,000 over the last two years. If those same clients had been housed in the detention center, it would cost $32 a day, or $611,520.

Fox said he and Thomas worked to open the center to the public simply because “people started showing up at our front door,” asking for help with addiction. They, now, can take part in the work with peer support specialists; the 12-step plan; mental health treatment; group and individual therapy; drug and alcohol education; and employment assistance, to name a few of the services.

“We are very involved in the community,” Fox said, noting Shepherd’s House takes on many community service projects, such as cleaning up Constitution Square Park.

Fox broke the $20,000 funding request down into three parts: $12,000 would be for local scholarships fund; $3,000 for additional curriculum and staff training; and $5,000 for an intervention and prevention program.

The scholarship program would sponsor two Danville residents per month in need of treatment. “On the front end, it’s $12,000,” Thomas said. “But if I can turn them into a tax-paying citizen, you’ll get your money back.”

A different curriculum, called the Matrix Model, is needed, Thomas said, because of the returning popularity of speed. He said due to initiatives put in place to battle the opiate crisis, more room has been made for methamphetamine and cocaine to re-enter the market; the Matrix Model was developed specifically to combat those types of addictions.

As far as the outreach initiative, Thomas said, “We need to focus on the kids before they become addicted. We’re showing up late in the game to the fight,” so they designed a five-day program where they take over a school’s health class. It includes requiring students to participate in an activity taking them through what it’s like if they get arrested for a DUI or dealing with an addiction, from being taken in by police and jailed, to appearing before a judge.

Thomas said Shepherd’s house operates on a “break-even business model; the goal is not to lose money.”

Commissioner Kevin Caudill asked how many clients the program generally treats from inside the city.

“One-third of the 165 clients, so roughly around 40-45 are residents inside the city,” Fox said. “Over the last two years, we’ve been the place to come. We have moms, dads showing up, wives and husbands who come in, asking for help.”

“I think it’s great you don’t have to get arrested now to get some help …” Caudill said, and added the funding should be considered as a priority because of the long reach of addiction into the community, and how it affects workforce development, the jail population and crime rates.

“This is something we should take a serious look at and do the best thing we can,” he said.

Mayor Perros said, “This is a fantastic program. It does everything you’d want a program to do. How do you expand it?”

Fox said one of the biggest needs is housing. Employment assistance, he said, is something they’ve been working on and making strides with. “But what happens when you let Roger out of jail today and he has nowhere to go? Because he’s burned every bridge with his family, and I don’t know where I’m going to go tonight because it’s going to be 32 degrees. Well, I’m going to go back to where I always go,” Fox said, referring to returning to substance abuse and ultimately back to jail.

Commissioner Denise Terry added, “Yep, and if you don’t have an address, you can’t get a job.”

Thomas said employee assistance programs located within certain industries is also a need. “Let’s go in there … so that you don’t cut your hand off because you’re high at work. And if you need help, we can intercept and bring you into our program and do that for professionals,” he said. “That’s how we expand, we go out into the community.”

Terry asked what Shepherd’s House full capacity is. Thomas said the program is at 40 right now, but it can expand to 60.

“I can do it, and Roger can do it, but we need the judge and the prosecutor to do it … Education is the key to this. We’ve got to be aware and we’ve got to know what’s going on,” Thomas said.