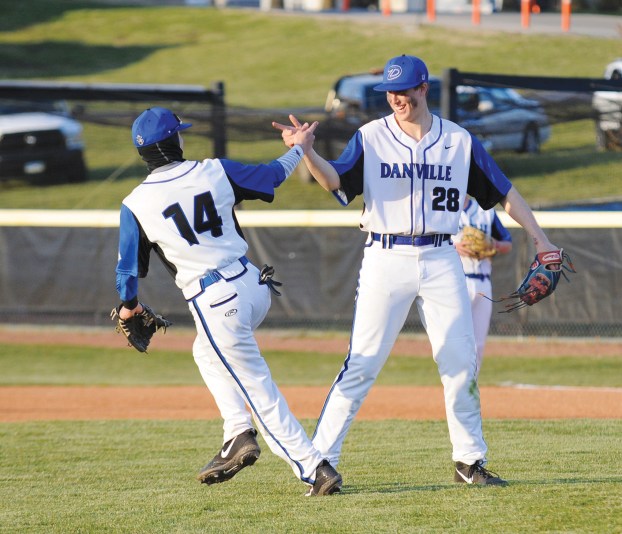 Danville’s baseball team has four upperclassmen on the roster.
But a talented group of underclassmen has the Admirals thinking of a 12th Region championship.

The Admirals have opened their season 2-0 and are one of the favorites in the region thanks to a talented lineup and pitching to match.

Even with the increased expectations, Danville’s players stay loose.

“It’s a good group. There’s lots of expectations,” head coach Paul Morse said. “But we’ve got four upperclassmen on the roster — three seniors and one junior. The rest are freshmen and sophomores. It’s still a young group, but we are more experienced. A lot of them played last year, we return a lot of starters. It’s a fun group, they like to have fun and play hard. That’s always fun to be around.”

It goes without saying that the four upperclassmen will have key roles on the team: Jacob Crank, Cayden Shaver and Noah Goodman are the seniors. Crank and Shaver typically fill the second and third spots in the lineup, while Goodman is the go-to pinch runner for the team.

Junior Hunter Baxter is in a class by himself and fills in just about wherever he’s needed — from outfield to catcher to pitcher, Baxter does it for the team.

Crank said that the mindset going into this year isn’t much different, but thinking about his “last firsts” as a senior is unique.

“We were really leaders last year, too, so it’s not anything different for us this year,” he said. “It’s weird, us being the seniors. Last ‘first’ everything. But we’re really comfortable with this team, we really feel like we can go out and win every game that we play. We’re not tight like we were last year, we’re confident.”

The Admirals held a strong 28-10 record last season and beat Boyle County in the 45th District championship before falling 3-0 in the 12th Region semifinals against Rockcastle County.

For the Admirals to win their first region since 2009, they’ll rely on a balance of pitching depth and a deeper lineup than last year.

Sophomore Christian Howe plays a key role in all areas of the game: He returns after missing a majority of the 2018 season due to an elbow injury. He’ll bat in the heart of the Admirals’ lineup and will be one of the most trusted arms on the team.

He’s one of six sophomores on the team who gained valuable experience last year and have grown — mentally and physically — since last season.

“So many guys like Christian, Brady (Morse), just physically they’ve grown,” coach Morse said. “They don’t look like middle school kids out there playing. We have one guy under 6-foot in our starting lineup. That’s good to see, that gives them confidence in themselves.”

“I think we’re just a bunch of dogs,” Shaver said. “We like to battle, fight, and now we’ve got experience. With our hard work this offseason and with our preparation, I feel like we can go far. This last year, just having all those freshmen be able to start, it gave them the ability to be comfortable this year and this stage.”

Morse said part of the team’s preparations in the offseason focused on conditioning: The Admirals’ bats slowed down at the end of last year. During the first 26 games of the 2018 season, Danville scored two or fewer runs in just two games. In the final 12 games of the season, the Admirals had five such games.

“We think last year, with a young team, we kind of petered at the end of the year,” coach Morse said. “I think we physically tired out. Most of those kids, they’ve played a lot of baseball but they’ve never played an entire high school season where you’re playing 4-6 games a week, every week, for two and a half months. They’re used to playing travel ball on the weekends then having four or five days off and doing it again.

“We’ve worked on our conditioning, strength and hopefully that has helped and we can stay healthy. We’ve added more depth and we want to keep guys fresh.”

Danville will need all hands on deck this season for what coach Morse described as a “brutal” schedule. This weekend, the Admirals are one of four Kentucky teams in the Prep Baseball Report showcase in Nashville.

“We’re seeing better competition, the schedule is tough this year,” the coach said. “We go this weekend down to Nashville and play two lefties who are going to Auburn and Clemson who both throw in the low 90s. It’s going to be a challenge right off of the bat. It’s a tough schedule all year, but we want to be prepared for the end of the year a little better than we were last year.”

How will the Admirals get through it?

“We have a bunch of goofballs, I’ll be honest,” Shaver said. “We take things serious but we have fun doing what we do. I think we’ve really come together, not only as teammates but as friends. That really allows us to be comfortable on the field with each other.”

And, for coach Morse, it’s about taking that energy and applying it every day and every rep.

“It’s a process about getting better every day,” he said. “We talk about it all the time, we talked about it before the game: You take it one pitch, one inning, one at-bat, one play in the field at a time. You keep building on it and it’s the same for the whole season. Just try to get better each day, each pitch, each at bat. Don’t take things for granted. Coming to the end of the season, when it comes tournament time, you’re playing your best ball.”

“That’s just Ivy Turner.” Whether it’s scoring 40 points in a game, leading her team with a triple-double, talking to... read more