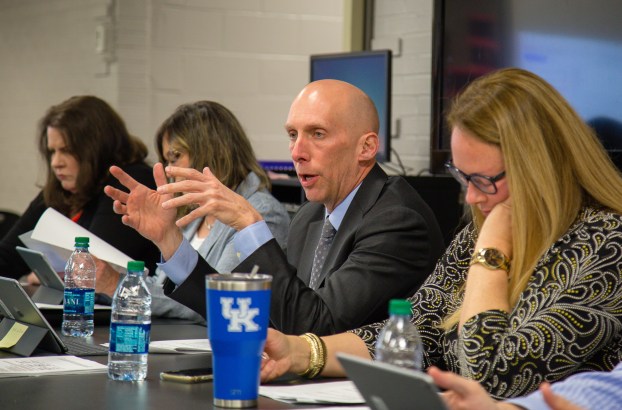 The Boyle County Board of Education held a “first reading” Thursday of a modified policy that would implement random drug-testing of most middle- and high-school students.

The board could approve the policy in April, at which time it would then also need to approve formal procedures for drug-testing based on the policy, and issue a request for proposals for third-party companies to administer the drug tests.

Superintendent Mike LaFavers said the decision of whether to implement drug-testing will be left up to the school board members.

“My team — we will support whatever decision you all make on this. We know that you all take your vote very seriously on all matters and we respect that,” LaFavers said. “So however you all come down on this, we’re with you 100 percent.”

The policy would require random drug-testing of all students from sixth through 12th grades who choose to participate in extracurricular activities or drive themselves to school.

District counselor Pam Tamme, the head of the committee that developed the proposed policy, told board members the drug-testing requirements would be built into an existing policy — the district’s “Use of Alcohol, Drugs, and Other Prohibited Substances Policy.”

The revised policy would also require teachers to receive training in drug awareness, and provide education for parents about drug use, she said.

The board first heard about the proposed drug-testing policy in January. Earlier this month, it held a public forum and heard from 24 community members who spoke in support of and against the policy.

Questions posed during the forum were collected and answered by district staff; those answers have now been posted on the district’s website, LaFavers said.

The longest answer from the district is provided to the question, “Is random student drug testing (an) effective use of the money? Is it the best approach? What does data and research indicate?”

The district combats drug use through “prevention” and “early intervention,” according to the answer.

For prevention, the district provides parent and student education on the dangers of drug use and how to develop “resilience” through things like “coping strategies, calming strategies, mindfulness, peer pressure and self-control.”

The district provides early intervention by offering counseling services to students who need them.

“Random student drug testing would be another layer of potential prevention, as well as early intervention for students who test positive for drug use,” the answer states.

The evaluation’s other findings include:

• Random drug-testing programs “had no ‘spillover effects’ on the substance use reported by students who were not subject to testing and had no effect on any group of students’ reported intentions to use substances in the future.”

• Random drug-testing did not affect participation levels in extracurricular activities, “students’ attitudes toward school” or “perceived consequences of substance use.”

• Impacts of drug testing may have been “related to the ways in which the programs were implemented” and what drugs were tested for.

Other questions and answers include:

• What happens when a student’s drug test is positive for drug use?

“When a student has a confirmed positive drug test result, the principal/designee will meet with the student and parent/guardian to discuss the test results,” the answer reads.

• How will false positive test results be addressed?

Every urine specimen collected from students will be tested using an “immunoassay technique” and positive results will be checked again using a “gas chromatography/mass spectrometry” test. Both tests must be positive or else the sample will be considered to have tested negative, according to the answer.

The drug-testing company will also hold part of the student’s urine sample for six months to allow for further testing.

“Any student who has tested positive or the student’s parents or legal guardians may contest the result by informing the principal,” the answer reads. “… The student and parent/guardian shall be given the opportunity to present relevant evidence to defend the charge of violation of this policy prior to implementation of sanctions. … The final determination of the student participant’s or driver’s eligibility will be made at the school level by the principal.”

• What happens to the records and documentation concerning positive drug test results?

• How will confidentiality be addressed in this process?

“Appropriate measures will be taken to protect confidentiality throughout the testing process and in the handling of test results,” the answer states. “Access to drug testing results within the district will be restricted on a need-to-know basis to those persons in positions designated by the superintendent. Typically, this would include the principal and district/school health care professionals. The athletic director and head coach (if involved in athletics) and/or club sponsor will be informed of any applicable consequences to positive test results.”

• Will the drug panel include testing for synthetics and alcohol?

The answer does not specify, instead noting “the procedures … presented in April will spell out the substances” that will be tested for.

• What about drug testing of district employees?

Another committee is exploring the possibility of drug-testing employees, according to the answer. “There are approximately 78 districts in Kentucky who currently are engaged in some type of staff drug testing, including random testing and/or testing based on reasonable suspicion.”

Other data on drug-testing

A 2013 study published in the journal Addiction found that “while there is insufficient empirical evidence to definitively support or refute the efficacy of (random student drug-testing) in schools, … they may enhance school-based drug abuse prevention programs when implemented according to recommended guidelines in the context of a positive school climate.”

A 2013 study published by the Society for Adolescent Health and Medicine looked at 14 years of data from across the U.S. It found that random drug testing was associated with “moderately lower” use of marijuana and “increased use of illicit drugs other than marijuana.”

A 2014 study available from the U.S. National Library of Medicine found “student drug testing was not associated with changes in substance use, whereas perceived positive school climates were associated with a reduction in cigarette and marijuana initiation.”

Brent Blevins says the Boyle County Health Department has been preparing for its growing pension obligations for over a year... read more