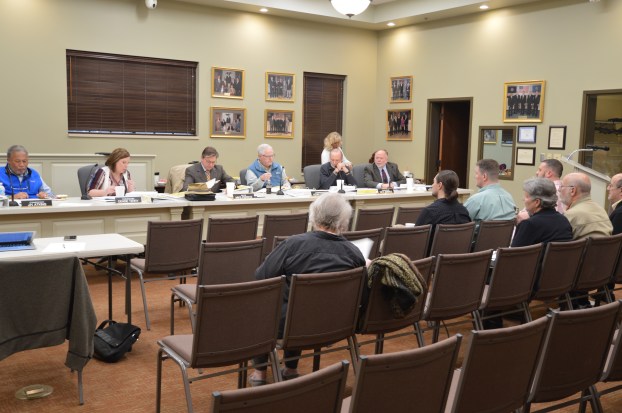 The Danville City Commission listens to requests for funding during Thursday’s meeting. Photo by Bobbie Curd.

Editor’s note: This is the second story in a series focused on agency funding requests made to the City of Danville for fiscal year 2019-20.

During Thursday’s agency funding requests, the Heart of Danville was asked how it would prepare for a shortfall in what the city could fund. The Heart asked for $110,000 this year — the amount it had previously received from the city for 10 years, until it was cut down to $72,500 last year.

After Logan Germann, the Heart’s board president, and interim director Dustin Duvall gave presentations explaining what the agency does and it’s upcoming goals, Mayor Mike Perros said he had a question.

“‘The decision to cut our request by $37,500 last fiscal year put a hardship on the organization that we were not prepared for,’” Perros read from the Heart’s funding request letter.

“We have said for three years: Be expecting a decrease. And we’re saying it loud and clear … With that said, how are you going to prepare for it? And I’m giving you that so you’re not surprised,” Perros said.

Duvall, who was hired in 2017 as office manager but has been interim director for three weeks since Nick Wade resigned — said they had “scheduled meetings” already set up. “For after we find out what we’re going to get … We’re a staff of one, and as you see from our letter, we’d love to be a staff of two. But again, that all depends on this, and where our finances kind of fall as the year progresses …”

Germann said changes have already occurred. “We have no contract to do an ice rink this year; we are drastically changing our plans for HarvestFest this year; we are not able to sponsor Soul of Second Street like we’d like to; and we have no plans for an art project this year,” Germann said. “So we’re tightening our belt and preparing ourselves for the worst.”

Perros said, “I know in the first year, the ice rink thing didn’t work out too good. How did it come out this year?”

“Much better,” Germann said. He said they got a cheaper rental fee by working through a local supplier, did a better job of raising funds through sponsorships as well as had an increase in skaters. He said the Heart would like to be able to offer the event for free, “but it’s just not something we can commit to at this time, without knowing about funding.”

“So net gain or net loss?” Perros asked. Germann said it was a net loss.

In the presentation, Germann said the Heart was established as a national Main Street Program in 1986, and has supported over 100 major renovation projects in its more than 30 years of existence, as well as “fostering a significant increase in downtown businesses.” He said much of its success is due to local government and community support.

“We receive support from this body, the fiscal court, the Economic Development Partnership, local businesses and private citizens,” Germann said.

That support was also a question on City Manager Ron Scott’s mind.

The list of goals Duvall presented included partnering with the EDP and the city to develop and promote a small business incentive package; help facilitate an entrepreneur training program; help promote new and existing businesses with co-op advertising; obtaining small improvement facade grants and assisting with historic tax credits; volunteer recruitment programs “so volunteers feel that they are ambassadors of the Heart of Danville;” aiding in the Bourbon Chase; developing free family events; and “helping to facilitate a joint consensus through more routine meetings and networking. We’d love all businesses to say ‘us’ and ‘we’ instead of ‘I,’” Duvall said.

Commissioner Kevin Caudill said, “You talked about small business incentives as one of your goals. How do you see that? What form would it take?”

“We haven’t gotten started on it. It’s something my predecessor, Nick, was really gung-ho about,” Duvall said, and that those meetings would start soon to “see what all that entails.”

Scott said in reading the matrix of the Heart’s work plan, many of them are already currently underway by the agency, and that those are better indicators of “past success.”

Commissioner Denise Terry asked if they are in the process of hiring another director.

“We have a search committee forming,” Germann said.

In his presentation, Germann said, “Not every element of the Heart is quantifiable in dollars and cents. Some of the work done by the staff, board and volunteers pay dividends in different ways. Some investments are for the long-run, that will pay off in the quality of life.”

The Boyle County Board of Education held a “first reading” Thursday of a modified policy that would implement random drug-testing... read more