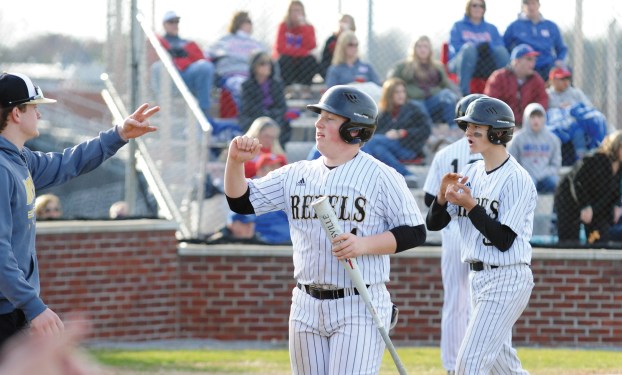 For the second straight year, Boyle County baseball will be defending a 12th Region title.

It’s a bit different this time around: The Rebels graduated 10 seniors from last year’s team.

It’ll be tough to replace the production of those seniors, in all areas of the game. But Boyle’s junior class is up for the challenge.

“We definitely lost a lot, but I feel like if we play the way we can, we can beat anybody,” junior Karson Thompson said. “Obviously right now we’re not where we’re going to be, but nobody knows how it’s going to look in a month or two. I think we’ll be fine.”

Thompson and eight other juniors make up the core of the 2019 Rebels, and most of those juniors earned valuable playing time during last season’s state tournament run.

“We’ve got a really good junior class, and they have to be called upon as leaders because we have no seniors on the team,” Boyle head coach Kyle Wynn said. “Kind of by default, they’re the leaders. But we have guys who got their feet wet last year with valuable innings for us and now they’re full-time starters this year.”

The Rebels have four starting pitchers who could pitch in a must-win game right now, and Wynn said that number could grow as the season progresses: Thompson and Blake Samons started the first two games (Samons was undefeated last year), while Collin Carver is another junior that will frequently sees the mound. Sophomore Eli Glasscock earned time on the mound last year and will be called upon as a starter or reliever this year.

Those four have the support of the hitters in the lineup, too.

“I feel like we don’t really have a 1-2-3, we could throw Blake, Collin, Karson, Eli and I would feel like we could beat anyone in the state,” Grant Hotchkiss said. “We’ll have a rotation but anyone can be our ace, it just depends on who’s on.”

Hotchkiss won’t be on the mound due to a shoulder injury during basketball, but he’s already proving his worth at the plate: In just two games this year, Hotchkiss is 3-for-6 with a triple, double, two runs scored and four stolen bases in four attempts.

Sophomore Jack Briese leads the team with four runs batted in, and he’s an example of the team’s strength this year: Versatility. And Wynn said the team’s versatility will be needed early in the year as players recover from injury and depth is built.

“Depth is one of the things we’ve got to work on,” Wynn said. “I like our group, we’ve just got to get some of those 11th, 12th guys in the fold. Get them some experience and they’ll have to help us out. We’re versatile. We’ve got guys who come from behind the plate to shortstop. They’re moving back and forth if we make a pitching change, guys might have to play infield or outfield. I don’t think we have any lineup that’s stationary at just one spot this year. I think that’s going to be a key to our success until we get that depth going.”

There’s no doubt that the success of the Rebels will rely on those nine juniors, but some of the underclassmen will play a key role as well.

“We’re the upperclassmen, it feels kind of like our senior year, to be honest,” Hotchkiss said. “Losing all the seniors that we did, that’s a big loss to us. But I feel like everyone will fill in to their new role pretty well. Once we get rolling I think everything will work out.”

“It’s not much different than last year, we just have a little different role,” Thompson added. “We have to do what the seniors did last year, step up.”

The junior class has been together through two straight region titles and most have been playing together since tee ball.

“Last year we played as a team, but this year, this team has played together our whole life,” Hotchkiss said. “I moved here in eighth grade and all of them have played together since they were little. We know each other like the back of our hand … Most of these guys know what it’s like to play on the big stage and we know how to get there.”

Both Thompson and Hotchkiss agreed that the Rebels will be a team to watch this season.

“Right now, not everybody is hitting the way they want to, but it’s a process,” Thompson said. “It’s way more mental than you realize, until you start hitting and seeing pitches. It’s more mental than anything.”

And when those hits start to fall, look out. Hotchkiss said that other teams in the region might be “favored” over the Rebels — noting Danville and Southwestern as two teams that brought back a majority of their team — but the region will have to go through Boyle County.

“We’ve won the region two years in a row, but right now I feel like we’re definitely an underdog,” Hotchkiss said. “Obviously people that know the 12th Region will think (Danville and Southwestern) are the favorites, but I feel like we didn’t lose as much. We have kids coming up that people will be surprised by and I think we can do some damage once we get rolling.”

Danville’s baseball team has four upperclassmen on the roster. But a talented group of underclassmen has the Admirals thinking of... read more