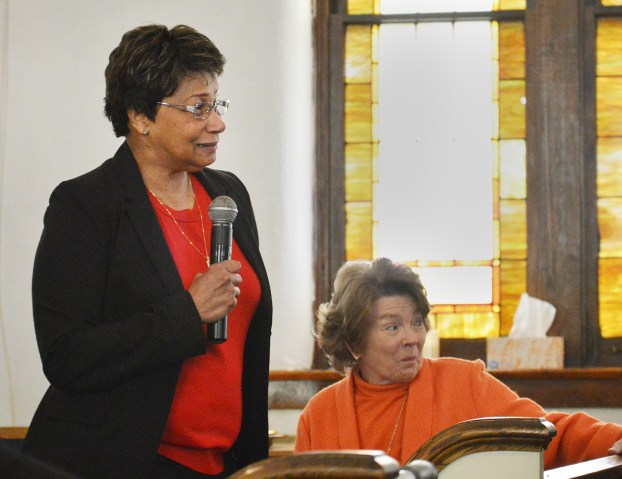 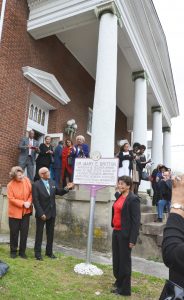 Following a special program Sunday afternoon, a historic marker was unveiled in front of the church honoring Britton. The white, black, yellow and purple marker (colors of the suffrage movement in the 1880s) was the second of 250 to be installed throughout the United States. The National Collaborative for Women’s History Sites (NCWHS) and the William G. Pomeroy Foundation have partnered to sponsor the markers as part of the National Votes for Women Trail (NVWT).

According to a news release, the centennial of the 19th Amendment to the U.S. Constitution allowing women the right to vote will be celebrated in 2020, and Kentucky’s suffragists are the first being recognized for the work they did to win federal protection of their right to vote.

The Rev. Ralph Smith said he was contacted by NCWHS national president Marsha Weinstein about a year ago, when she told him of the significance of Britton and the speech she gave at the church more than 130 years ago.

“I am excited. It’s always been a church of history,” Smith said. But, he added, he didn’t know about Britton or her speech until Weinstein told him.

“Second Street and Walnut Street was the heart of Danville for African-Americans,” Smith said. “Everybody is in awe to know that in that time frame (July, 22, 1887) Dr. Britton was speaking to the Colored Teachers Association” about the importance of the women’s right to vote.

Weinstein said the culture of the day was that “women should strictly support men.” So hearing an African-American woman talk to a group of teachers about the right to vote was pretty amazing. “It’s powerful that it was right here in Danville,” Weinstein said. 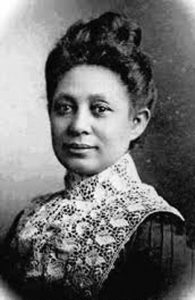 Contributed image of a portrait of Dr. Mary Ellen Britton, an important woman in the history of the women’s suffrage movement. She gave a speech at AME Church in 1887.

Weinstein said there are a lot of “untold stories” of women’s history and their fight to have the right to vote that people ought to know, and the NVWT is one way to help educate the public.

“Most of the time they just know the big story. But historical markers show more history,” Weinstein said.

Dr. Karen Cotton McDaniel, historian and co-editor of the “Kentucky African-American Encyclopedia,” an expert on the history of black women in Kentucky including Britton, was the speaker.

She described Britton as being born into freedom in 1855. Her mother was biracial — African American and white — who had been born a slave but was emancipated at age 16. Her father was of Spanish-American Indian descent and was free.

McDaniel said Britton was very well-educated and was a gifted teacher and writer. Many of her articles on social reform were printed in large publications such as the Cleveland Gazette, American Catholic Tribune and the Lexington Herald.

Britton earned her medical degree in Michigan and returned to Lexington, where she was the first African-American female physician in the area.

Britton was a founding member of the Kentucky Negro Education Association and was a member of the Lexington Woman’s Improvement Club.

During Britton’s speech in Danville, she told the audience that women would bring a strong moral influence to politics if given the franchise and allowed to serve in elected offices. She emphasized black women’s right to vote since they were taxpayers too, and that men of honor should change the laws that denied “wives and mothers their just rights.”

Given the difficulties in black men’s access to the voting booth and the racial violence of the times, this speech was considered very radical for the times,” according to the news release.

Britton wrote, “The voting of woman will be the safety of men throughout the nation. If men are selected for office whose election depend as much upon the votes of woman as upon those of men, not one bad man will be put up where there are 50 now. … When woman becomes a voter, lawmakers will stop spending the public money for cigars and fine drinks. They will no longer vote upon questions of public interest in an insensible state of mind.”

She continued that going to polling locations “is no more than going to the post office and dropping a letter. Some argue that polls are not decent places. As soon as woman suffrage is general they will be made decent for gentlemen as well as for ladies. … No movement of any great importance has ever taken place in the world, in which woman has not taken a prominent part as a worker, then most assuredly is woman suffrage a potent agency in public reform.”

Dr. Karen Cottom McDaniel, professor emeritus of Kentucky State University, talks about Dr. Mary Ellen Britton’s background and education, and why her speech in support of women’s right to vote was historically significant.

Marsha Weinstein, president of the National Collaborative for Women’s History Sites speaks about the importance of recognizing sites that were a part of the women’s suffrage movement. Photo by Robin Hart.

Editor’s note: This is the third story in a series focused on agency funding requests made to the City of... read more