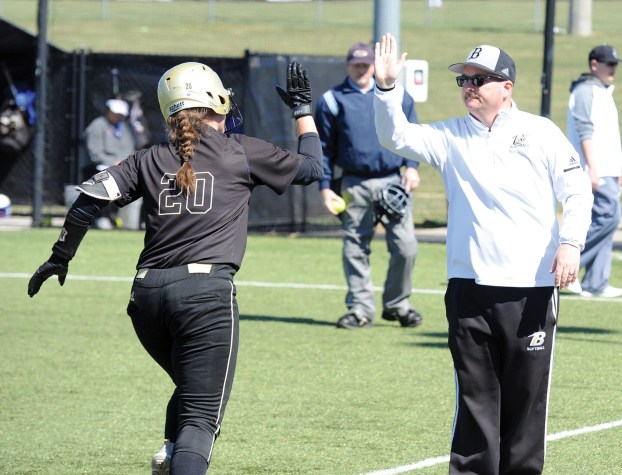 Boyle County’s softball team is once again one of the top 25 teams in the state.

The Rebels have built a 12th Region powerhouse under head coach Brian Deem and will look to continue their dominance this season.

As is the norm with Deem’s teams, the Rebels will be tested early and often this season in preparation for the postseason. And Boyle is young this year: Deem returns just three starters from last year and only has one senior on the roster.

“I don’t want to get the cart before the horse just yet, but we have responded really well since our opening game with Male,” Deem said. “I’m seeing a lot of good things, we’re starting to play together, we’re starting to click. We are still having some mental lapses that I’m not real pleased with. That’s going to get better with time, practice and a bit of maturity.”

Boyle opened the season against the state No. 1 (and nationally ranked) Male, but has followed up that loss with three straight quality wins over Mercy, Allen County-Scottsville and Eastern.

Deem has 28 teams scheduled this year (outside of any in-season tournament additions). Of those teams, 10 were ranked by the state softball coaches to start the season. Eleven more teams were receiving votes.

So, 21 of the 28 teams Boyle has on the schedule have received some kind of statewide recognition.

“We do have a tough schedule again like we do every year,” Katy Grace Chadwell said. “Basically just stay positive, we’re definitely young but I still think we can do well. I think more than anything, we need to keep focused.”

Chadwell is the lone senior on the roster and is one of the state’s best: Through four games this year, she’s leading the Rebels with a .636 average and has four doubles, five RBIs and a home run. On the mound, she’s got three starts and 21 strikeouts through 18 innings.

The key to her having a successful senior season?

“Consistency,” Deem said. “When she’s there mentally and she’s focused, she throws pretty darn hard and can spin the ball. She’s doing well, she understands that she’s got a bunch of new faces in the infield, we’ve only got three returning starters and one of them is in a new position. So we’re just trying to get in a routine right now.”

Chadwell and junior Keely Bowling make a dominant 1-2 punch in the middle of the Boyle lineup: Bowling hit her first two homers of the season during a 12-2 victory over Allen County-Scottsville on Saturday.

Kyndal Honaker will be the next pitcher in line after Chadwell, and her first start of the year was against Allen County-Scottsville. She allowed one earned run and struck out eight in the win.

“They’re gritty. They’re gritty when they want to be,” Deem said of his team. “After the Male game, we put them back into some positions that they’re more comfortable with, get them some confidence. It has paid off for us in the last couple games.”

Gervacio said that, although the team has a new group of starters, most of the team has been around for their back-to-back region championships.

“We’re a young team, but everybody who’s playing now sat through it last year, they know the expectations, stuff like that,” she said.

Expectations remain high for the Rebels, who come in at 20th in the latest coaches’ poll. Boyle was also predicted to win the 12th Region again by region coaches.

But that doesn’t matter to Deem: It’s about on-field performance.

“I try to keep our kids grounded, I remind them that the rankings don’t mean anything,” he said. “Bottom line, the proof is in the pudding when you go out there and play. That’s one of the things that our program has developed into: We’re never going to be satisfied, we can always improve. The ceiling is no ceiling. Keep going, as high as you can. We’ll keep pushing, keep working.”

There’s no question that the Rebels’ schedule will prepare them for the postseason.

“This week was a grind and next week will be awful as well,” Deem said. “We’ve got a grind, we’re on the road a lot, but this is going to pay off in May. I believe that.”

The players embrace the challenge.

“It’s definitely a grind, I know a lot of us will get tired, tired of each other,” Chadwell said. “But we’ve got to push through and just try our hardest. It’s a challenge when you go so many games, days back to back. But it’s fun. I like the challenge.”

“We all have to lean on each other during the tough weeks, because if I have energy, she’s going to have energy,” Gervacio said. “We have to come together and all be supportive, trust each other that we’re going to do our best for each other.”

For the second straight year, Boyle County baseball will be defending a 12th Region title. It’s a bit different this... read more