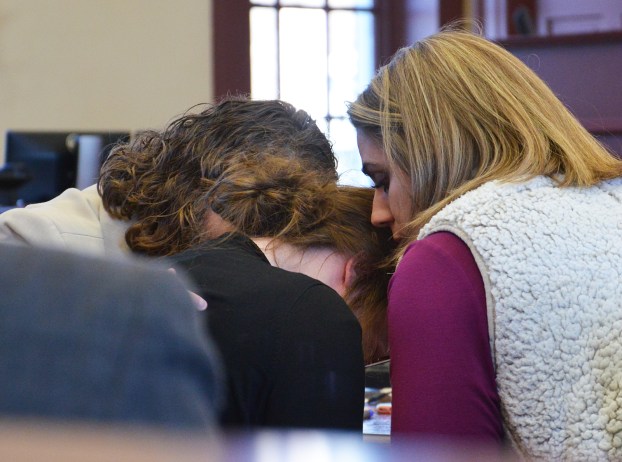 Jenna Oakley, 18, was sentenced as an adult and immediately remanded to the Department of Corrections Wednesday on charges of manslaughter and theft in connection to the death of her step-mother when Oakley was 15.

In January, Oakley pleaded guilty to first-degree manslaughter of Rhonda Oakley. In February, she apologized to the court for her actions on the day her step-mother was killed.

At that time, defense attorneys asked the judge to allow Oakley to receive treatment in the Department of Juvenile Justice until she turned 18 plus five months, at which time she could have been given probation or remanded to stay until she turned 21, then finish her agreed upon sentence as an adult. Instead, she was sentenced directly to serve in the Department of Corrections as an adult. 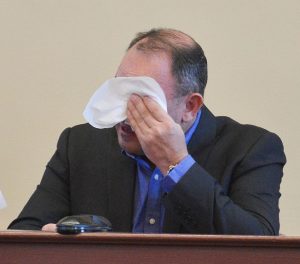 Phillip Oakley wipes away tears as he gave a victim impact statement in circuit court Wednesday. Photo by Robin Hart.

When giving his decision on how Oakley should be sentenced, Boyle Circuit Court, Judge Darren Peckler said, “This was particularly cruel. It was senseless. It was even callous to that regard. The defendant is a violent offender under the statutes. Unfortunately, this tragedy has led to the loss of two lives — that of Rhonda Oakley and that of Kenny Nigh.”

A few staff members from Adair County Youth Development Center who knew Oakley while she was incarcerated there said they found her to be “respectful,” “pleasant,” “helpful,” and “never had any negative issues.”

Jenna Oakley also read a letter to Judge Peckler saying how sorry she was for causing so much pain in so many people’s lives and that she was asking for a second chance to continue her education and treatment so that she would become a better adult. 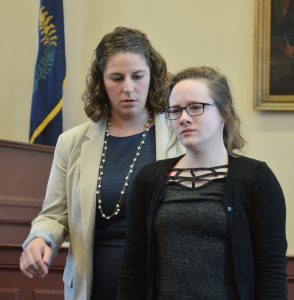 After a short recess to compose herself after listening to her father’s statement Jenna Oakley walks into the courtroom with defense attorney Jessica Buck. Photo by Robin Hart.

Jenna Oakley’s father Phillip Oakley took the stand to give a victim impact statement. He looked directly at his daughter and described how he and his wife had tried to give Jenna a better life and how he tried to keep Kenny Nigh away from his daughter. He said Rhonda loved Jenna and didn’t want her to be sent to boarding school when Phillip Oakley suggested it because of Jenna “getting out of hand.”

Jenna began sobbing and called to her dad, “No, No, don’t say that!” then a short recess was called.

In closing statements, defense attorney Erica Roland repeated evidence she had given earlier about how it wasn’t in the best interest of juvenile offenders to be sent to prison with adult offenders.

However, Judge Peckler ultimately ruled that being sent to prison for 15 years “will not keep her from achieving her life goals, her educational goals after her release,” but the tragedy will never go away for Rhonda’s Oakley’s family.

“I think the judge made the absolute wrong decision and it flies in the face of the U.S. Supreme Court precedent that clearly states that juveniles are supposed to be treated different from adults, especially for purposes of sentencing,” Roland said after the sentencing. “And it disregards her background and where she came from, and frankly lets a lot of people off the hook so that they don’t have to deal with their realities of their treatment and what she needs.”

Roland added, “It also disregards the progress that she’s made since being incarcerated and sends the wrong message, not just to her, but to all kids that are incarcerated hoping that the judge would give them a second chance. But apparently good behavior doesn’t matter.” 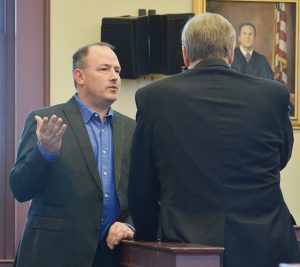 Phillip Oakley said he doesn’t believe his daughter’s sentence is long enough. “But at least she’s going to prison. She deserves to go to prison.”

“We believe that the judge made the appropriate ruling based upon circumstances and the seriousness of the offense,” Bottoms said. “The time has come for the defendant to be treated as an adult.”

Mark Kitchen never meets a stranger. He says that’s likely how he gets most of his jobs, but a long-time... read more