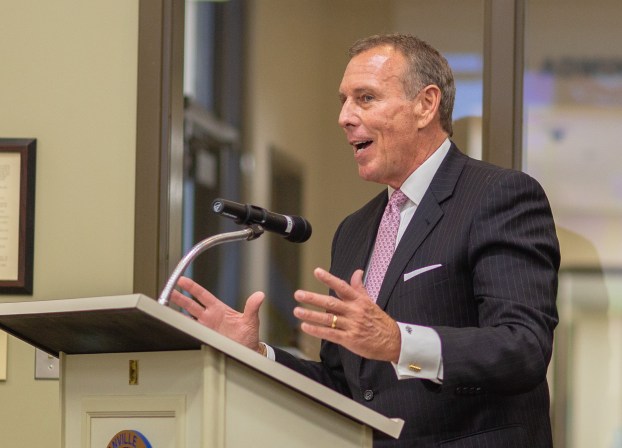 Local attorney Ephraim Helton tells members of the P&Z Commission a property up for a proposed zone change to commercial has always been used for commercial purposes despite its residential zoning. Photo by Ben Kleppinger.

A zone change has been approved for a potential new business that could open on Fox Harbor Drive in Danville.

The former Durham Beauty School building had been zoned for residential use, but is now zoned “highway commercial” after a unanimous vote by the Danville-Boyle County Planning and Zoning Commission.

The property sits at the corner of Fox Harbor Drive and Denmark Drive, directly behind the large bypass commercial development anchored on its east end by Tractor Supply.

While it sits in a largely residential area, P&Z Director Steve Hunter said it had been used for a commercial purpose — the beauty school — for years.

A new buyer is now interested in putting a business in the existing building, but because the building has been vacant for more than 12 months, it’s no longer grandfathered in — thus the need for the zone change, Hunter explained.

The buyer is not ready to announce at this point what the business will be, he said. 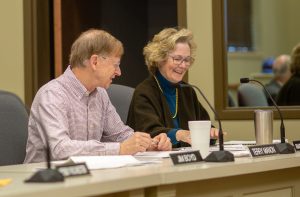 The zone change was approved with conditions that the property be used for “neighborhood commercial” purposes, such as a day care or elder care facility; or office space.

That’s because Danville doesn’t have an appropriate zone that allows neighborhood-friendly commercial development, P&Z Director Steve Hunter said. The highway commercial zone, which allows for things like big box stores and fast food restaurants, is the only zone that also allows lighter commercial uses, he explained.

The conditions on the zone-change approval include limiting the height of any buildings on the property to one story and a total square-footage cap of 3,00 square feet. Free-standing signs will not be allowed.

“The likelihood we’re going to see a McDonald’s or something intense go back there — it’s not going to happen,” Hunter said.

Local attorney Ephraim Helton represented the seller, the estate of Charlene Benge, at the public hearing for the zone change.

While the property was zoned residential, Hunter said the city’s future land use map (FLUM) actually already plans for the land to be used for a commercial purpose.

No one spoke against the zone change at the hearing.

Jenna Oakley, 18, was sentenced as an adult and immediately remanded to the Department of Corrections Wednesday on charges of... read more