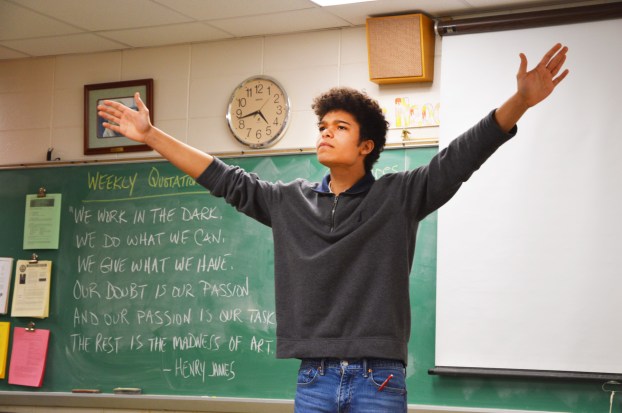 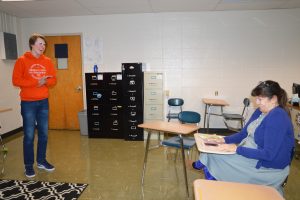 Charlie Hall and coach Christel Belcher have a laugh together while Hall practices a piece he performed in order to qualify for the National Speech and Debate Association’s upcoming grand nationals in June. Photo by Bobbie Curd.

But before they headed to Western Kentucky University last weekend, students were working on their pieces for the elimination rounds after-hours at DHS; two of them with the help of coaches Steve Meadows and Christal Belcher.

Senior Joseth Warner was practicing with Meadows in his classroom at the top of the stairs. Warner was the state runner-up in dramatic interpretation, placing or winning at multiple speech competitions before that.

“He’s an amazing performer,” Meadows said, after Warner ran through his piece, an excerpt from a play called “The Mojo and the Sayso,” by Aishah Rahman, about the shooting of an African-American man by the police.

Meadows said Warner makes audiences like and care for the character first, then pulls them into a fatal story, making them think.

Warner began taking forensics in middle school, but didn’t get serious about it until he began going to competitions. “I realized I could actually do it,” Warner said. He said speaking is a part of everyday life — anyone can benefit from taking forensics.

Meadows said Warner has become way more focused. “I had him when he was a freshman; he was bouncy and happy. He’s settled himself down,” he said.

Warner said he may go into pre-law, but definitely wants to do something with acting, as well.

“He’s found a path and this has helped him in that way,” Meadows said. 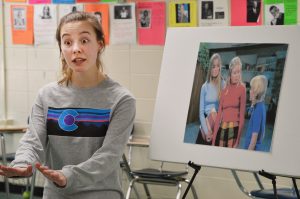 The try-outs for state held in Bowling Green consisted of 106 different districts battling each other. While some states, like Texas, have multiple districts, there’s not as much forensics participation here, Meadows said, “so we’re all one district, with two spots to go to nationals.”

Three different individuals came out champs from the state tournament, including Charlie Hall. He won in humorous interpretation and storytelling.

Hall was downstairs with speech coach Christel Belcher. She’s the district special education facilitator for Danville schools, and had dropped out of coaching for about a year but is now back for about one day a week.

Meadows has two main assistants, Belcher said — Beth Marlow and Maggie Jenkins. Plus some Centre College students step in to help, as well as some former students who come back to assist now and then.

“I came back last year to do it because I’m attached to this young man,” Belcher said, looking at Hall. “I like working with him.”

Belcher and Hall were looking through the judges’ ballots at state competition from a couple of weeks ago, making sure they took note of each criticism and pointer.

“It feels awesome to be state champ,” Hall said. He said it was a wonderful conclusion to the past four years’ worth of work he’s put in.

“Not just to receive recognition for the success, but also it was a nice way to show the people I work with what I can do with what they taught me,” Hall said. “This was just a really nice way to end it.” Especially, he said, because he made it into storytelling finals last year and didn’t win.

“This year was especially important to me so I could get the coach’s plaque for Miss Belcher,” Hall said, pointing to a shelf behind her desk. Belcher has coached three different state champions.

The National Speech and Debate Association grand nationals will be held in June in Dallas.

Editor’s note: This is the fourth story in a series focused on agency funding requests made to the City of... read more