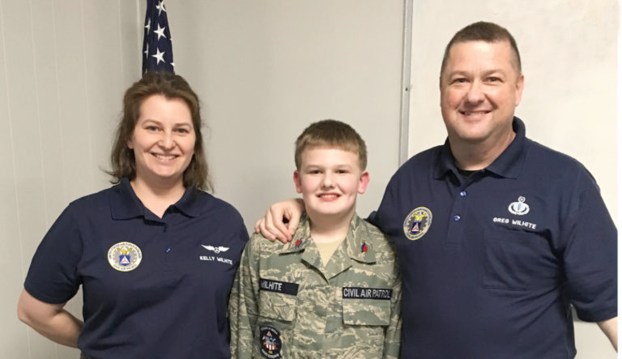 Wilhite intends to use the $17,000 worth of scholarship money to complete her last semester of commercial pilot training at Eastern Kentucky University and obtain her flight instructor rating so that she’ll be qualified to take CAP cadets on orientation flights. Each cadet gets five orientation flights where they learn about the basics of flying.

In addition to taking aviation classes in Richmond, Wilhite also works full-time as a professor at Frontier Nursing University, where she earned her doctorate and will soon be teaching classes in Versailles. She’s also the mother of five children and a foster child.

Since moving to Kentucky last winter, Wilhite has been a captain, pilot and health services officer for the Danville Stuart Powell Civil Air Patrol Squadron 122.

“That little squadron is doing really, really well,” Wilhite said. Several of their members have progressed to the highest rank possible. “It’s great to have such an active CAP in such a small town,” Wilhite said.

Wilhite and her husband Greg have been CAP members since 2003 when she was stationed at St. Andrews Air Force Base in Maryland.

They wanted to continue their support of CAP when they moved to the Lancaster area last winter. Plus, their 13-year-old son Joshua has joined CAP.

Being in CAP where the youth earn ribbons and ranks “is a great motivation for them to do well in other areas of their lives, too,” Wilhite said.

Wilhite is an Air Force veteran. She spent 12 years as an advanced practice nurse midwife. She completed a combat operations tour in Afghanistan and left the military in 2013 as a major select.

Wilhite said her father was a pilot and she always wanted to fly. “But growing up, I never saw women in aviation. So I didn’t see that opportunity,” she said.

“Even now it’s very rare to see women flying … I want to make sure girls see other girls flying.”

Wilhite competed against several hundred female aviators through a series of essays, interviews and evaluations, according to a CAP news release. She won $17,000 in scholarships to further her aviation career including a $10,000 WAI Space Flight scholarship; a $5,000 United Airlines Flight Operations scholarship; and a $2,500 Russ and Lauren Cotney Pro Airline Pilot Career scholarship.

Industrial land is scarce in Boyle County, according to members of the Boyle County Industrial Foundation. That’s one factor they... read more