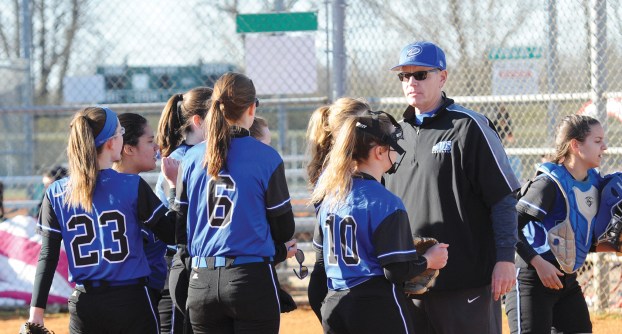 And this season, Danville will be getting those reps against a tougher schedule: Breitenbach wanted to play better competition in his first year as head coach.

The Admirals are young — Breitenbach starts just two seniors — and his main goal is to turn inexperience into a stronger team by postseason.

“My goal is to play better competition and that’s what we’re doing,” he said.

The tough schedule has been just that early in the year: Danville is 0-6 after a loss to Tates Creek on Wednesday, but the Admirals have been showing signs of life: After scoring one run in their first two games, the Ads put up 20 runs in their next three games.

“I think the girls are having fun and they know that we’re here to get better,” Breitenbach said. “We’re not going to quit. We’re going to keep playing.”

That was evident in a comeback against Campbellsville on Tuesday, when the Admirals nearly rallied from an 8-0 deficit. Danville had the tying run at the plate before a hard-hit line drive was caught at third base.

For the Admirals to succeed this season, it’s about limiting the big inning: Danville gave up eight runs in the second inning against Campbellsville. Against Tates Creek, a four-run third inning pushed the game out of reach.

But Danville’s team is positive, Breitenbach said, and that is down to his players.

“We had a couple girls last year that sowed some bad seeds, I guess, and they’re not here this year,” he said. “I think I just have a good group of girls. The younger girls who played last year are team leaders, almost, and our two seniors, they’re pretty quiet but they lead by example on the field.”

Those seniors — Peyton Young and Rachel Matherly — are key pieces in the heart of the lineup and defense. Young is the team’s ace, while Matherly plays second base.

“Peyton got stronger as the game went on (against Campbellsville), she was pitching really well there in the last few innings,” Breitenbach said. “Then Rachel, my second baseman, she’s a leader. But that’s it for senior leadership. They quietly lead by example, they’re here 24/7. They bring up the younger kids, my two eighth graders.”

Those eighth graders — Katie Young and Sammy Bottom — have earned starting positions alongside a core of sophomores and juniors.

It’s an uphill climb for the Admirals, but Breitenbach hopes that his team stays focused on the day-to-day, knowing they’ll be better off in the future after a tough schedule.

“We’ll keep plugging along and get better each day,” he said.

Boyle County took down Danville on the tennis courts on Wednesday. The Rebels swept on the boys side, winning all... read more