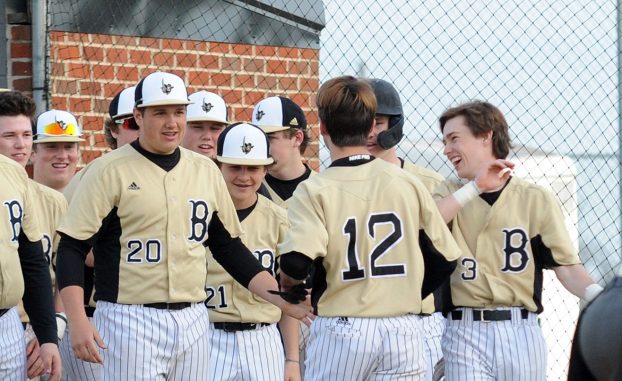 After one time through the lineup, his teammates started to pour in the runs against the Panthers on Thursday in a 10-1 victory.

Samons walked the first two batters he faced and allowed one to cross the plate but was dominant the rest of the way. He went six full innings while striking out eight batters to earn his second win of the season.

Boyle’s offense struggled to match E’town starter Caleb Adams’ stuff on the mound early, but that changed the second time through the lineup.

“He had some really good stuff there,” Boyle head coach Kyle Wynn said of Adams. “We were swinging at pitches down in the zone. Then on his fastball, he was a bigger kid, taller, leaving the ball up. We were popping up and swinging at those, our pitch selection wasn’t good.”

After a scoreless second inning, Wynn gathered his players to talk about how they’d approach Adams the second time through the lineup. But they already knew what to do.

“We just talked about it, we had been one time through the lineup,” Wynn said. “The guys knew even before I brought them up, they’re smart baseball players, they knew what was going on and made those adjustments and swung at some better pitches.”

In the third inning, Boyle got on the board thanks to some speed on the basepaths: Eli Glasscock reached first base after being hit by a pitch, stole two bases and scored on a single by Jack Briese.

Briese would be advanced by a Cam Yates bunt, but that wouldn’t matter: Karson Thompson hit a two-run home run, the first homer of the season for Boyle, to put the Rebels ahead 3-1.

Grant Hotchkiss would homer to cap a six-run fourth inning, and Wynn thanked the warmer weather for his team’s quick power surge.

“Sometimes it really is, you just feel loose and the ball flies a little bit,” he said. “I think more than anything, we did some things to open up that type of stuff. Guys were giving up some outs, giving themselves up with sac bunts. Then they were smart with it, pulling back without strikes, moving runners on their own when we didn’t have to bunt. That opened it up, then we had a couple home runs. We were attempting to play some small ball early there but once we made things happen, moved guys around the diamond, our offense came alive.”

The Rebels finished with nine hits, four walks and six stolen bases. Briese legged out a triple and Luke Gaffney had a double for the Rebels.

As the Boyle bats came alive and his teammates torched the basepaths, Samons continued to work on the mound. He allowed six baserunners and just three after the first inning.

“Blake did what he normally does, keeping their run total low for our offense” Wynn said. “Early there, if we let them open up it might’ve been different. We weren’t playing small ball and we might’ve had to hit our way through it. Keeping them to one run in the first inning allowed us to do things offensively.”

Collin Carver entered the game in the seventh inning to complete his first inning of the year.

“Collin has been sick, getting his feet wet with an inning there at the end was nice to see,” Wynn said.

The Rebels improve to 5-1 and will travel to Sweetwater High School (Tennessee) next week over spring break.

Briese finished 2-for-4 at the plate with three runs and two RBIs; Yates was 1-for-3 with a run and three RBIs; Hotchkiss 2-for-3 with two RBIs; Thompson 1-for-4, two RBIs.