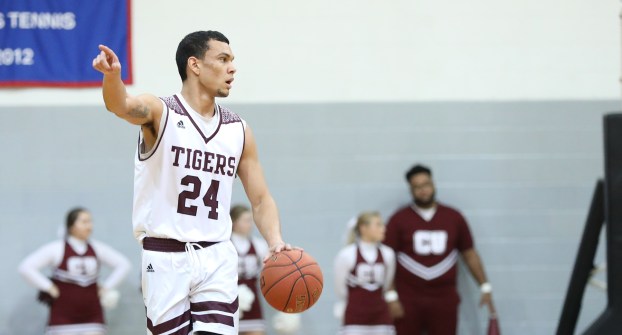 One of Boyle County’s best will go down as one of Campbellsville’s top basketball players ever.

His accolades speak for themselves: As a freshman, he was named Mid-South Conference freshman of the year. Sophomore season he was second-team all-conference. Junior and senior year he was first-team all-conference, and he was an NAIA All-American honorable mention as a senior.

“This year was his best year in his career, which is obviously a great way for him to go out,” Campbellsville head coach Brent Vernon said. “He had done so much the first three years, and I think this year showed how much his game has matured.”

Tyler’s points per game jumped by five to 18.5, and he became an even more clinical shooter form the outside, connecting on 45 percent of his threes. He never averaged under 40 percent from beyond the arc in all four years.

“I had a big jump in my game this year, went up about five points per game and I kept that average in conference, which was a huge step,” Tyler said. “Part of it was just my mentality, I didn’t just settle for threes. I used my mid-range game a lot this year and just got to the rim more. It was mainly just my mentality and confidence, early on I was playing good and it just stuck. My confidence was just so high, I believed in myself and it carried all year.”

That scoring bumped him to 1,951 career points. His scoring is a testament to his perseverance, Vernon said.

“He’s always been a guy known for offense, scored around 16 or 17 points a game. Then when conference comes around, our opponents and coaches are so good, he’s been the focal point (of their defense),” Vernon said. “He kept his average right around what it was for the year. I think that just showed how much his game matured over the years and how much he continued to improve. With his leadership, it was a great way for him to end his career.”

Plenty of words can describe Tyler’s basketball career, and Vernon said his impact will be impossible to replace with just one player.

“His legacy, to me in my seven years of being a part of Campbellsville, there’s been no player like him,” the coach said. “To me, it speaks volumes for someone like him to come in, today’s world of college basketball, you’re a good player and you end up doing well and transferring. He could’ve done that if he chose to do so. He could’ve moved up a level.

“But instead he stayed through it and goes down as the fourth all-time leading scorer, he’s the leading three-point shooter in history. He’s one that you’re not going to be able to replace with one person. You’re going to have to have multiple guys come in to even try to be close to filling the void that he will be leaving.”

Tyler was committed to Northern Kentucky University before he made the switch to Campbellsville. And, after four years, he wouldn’t change anything.

“Not at all. I’ve talked to my mom a lot about this too, I think there was a reason that I ended up here instead of a place like Northern,” Tyler said. “I think God led me here for a reason. I’ve loved every minute of it. There’s obviously going to be ups and downs, that’s going to happen anywhere. But I’ve loved it and I don’t think I would change anything. I had a great career and I couldn’t ask for anything more.”

His next step will likely keep him at Campbellsville for another year: Tyler is not ruling out the possibility of playing professionally, but the current plan is for him to be a graduate assistant with the basketball team next year. Tyler said he’ll plan to get his master’s degree in sports management or business.

“It’s kind of tough to pass up getting your masters if you can get it paid for,” Tyler said. “Then obviously it’s another year I can stick around ball and help the team next year any way I can.”

He’ll also get to take a year off of playing basketball full-time: He’s accumulated more than 4,000 minutes of in-game action over the past four years.

“His body is really worn down, we were always a little shorthanded,” Vernon said. “Our goal every year was to give Hagen around 32 minutes. And every year, he was playing around 37-38 minutes. The grind of the Mid-South Conference, 30-plus games a year, it can take a toll. I think he wants to take a year off right now, and as of now, the plan is for him to be a graduate assistant on our staff. For us, that’s a great thing because he epitomizes the type of student-athlete we’re looking for. To have him back will set an example for the guys we bring in next year.”

Tyler said he wants people to remember how much he put into the program — that’s what he’ll take away from his four years.

“One big thing I’m going to remember is that I stuck with it,” he said. “My sophomore year was a really rough year, we had a lot of downs. I had thought about transferring because of things that happened, but I’m glad I ended up staying. This school and university has been good to me and has given me every opportunity to succeed on and off of the court. My coaches, my teammates and of course the man above for leading me to Campbellsville. I just believe God led me here for a reason, it worked out perfect.”