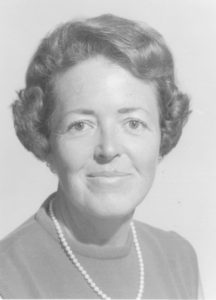 Inez Renee Chapman Erickson Thornton, 99, died March 29, 2019 in Danville, Ky. Inez was born March 4, 1920, in San Francisco, Calif. She was the daughter of Gertrude and Paul Chapman and stepdaughter of Emil Erickson. Inez graduated from Lowell High School and San Francisco State University. After college she moved to central California where she married John James Thornton. Inez taught first and second grade for 30 years in the Delano, California area and retired in 1973 to pursue her two passions-oil painting and golf. As a painter, she was accomplished in landscapes and florals. As a golfer, her 15 holes-in-one and two eagles speak for themselves. Inez moved to Danville, Ky., in January 2005 after the death of her husband.

At the request of the deceased, no services will be held. Internment in Bellevue Cemetery in Danville, Ky., will be private. Memorials can be made to the Community Arts Center of Danville, Ky.

Stith Funeral Home is in charge of arrangements. The online guestbook is available at www.stithcares.com

“Remember me with smiles and laughter for that’s how I’ll remember you”.