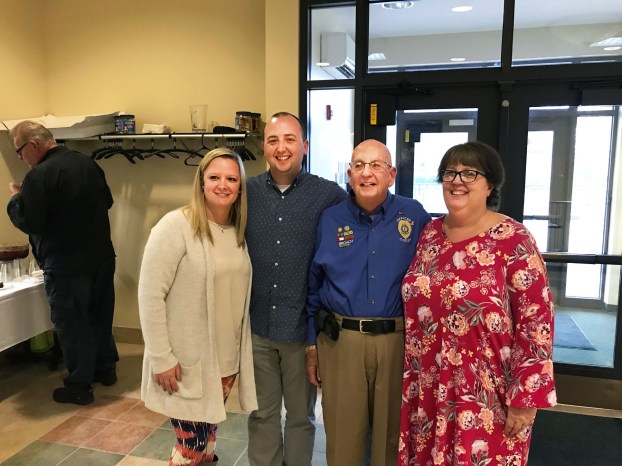 Tom Broach celebrates with his family who came out to support him during the March 25 city commission meeting when he was honored. Broach stands with his wife, Margaret, right, and his son and daughter-in-law, Chase and Brittany Broach. Photo contributed .

Last Friday was Code Enforcement Ofc. Tom Broach’s last day on the job. “Oh man, it was something else — 38 years and three months on the job. It was like, where’d it go? All that time?” he says.

Although Broach started out on a shrimp boat, crabbing, shrimping and finding oysters back in Mississippi where he’s from, all it took was one fated night riding with a deputy friend. “I was hooked after that, I knew what I wanted to do.”

Fast forward to Aug. 8, 1980, and Broach was an officer on the Nicholasville Police Department. A visit to McDonalds, where he ran into then Asst. Chief James Ryan Jr. and Capt. Michael Lamb, changed everything.

“ … I stopped and talked to them, and got recruited and came here,” Broach says. And he’s never once looked back. 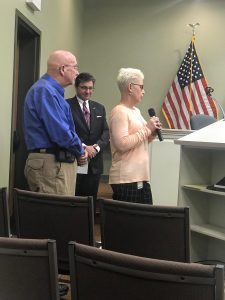 Photo contributed
Bridgette Lester has a hard time choking back tears during her send-off to longtime employee, Tom Broach, standing behind her; Mayor Mike Perros looks on. Broach and Lester worked together in codes enforcement for more than 20 years.

In ‘87, Broach said Lamb, who had become police chief, told him the Danville City Commission wanted an officer to do code enforcement because they were having problems. “He asked me about going over there, it was September of 1987. I didn’t know anything about code enforcement.” But he learned.

He partnered up with Mike Thomas from the fire department, who was the fire marshall at the time. “We we got over there, we didn’t have a pencil. Didn’t have a chair, no desk. No code books, we had to develop everything,” Broach says. They set their office up, and their philosophy.

“He took care of fire investigations, and I took care of code enforcement — from grass and weeds, to abandoned vehicles to barking dogs, you name it.” Broach says if someone called into the city with a complaint and “they didn’t know what to do with it, they contacted us.”

He says codes is here to assist the public, and help if someone has a problem getting up to compliance. “That’s our philosophy — we try to educate, get them sent in the right direction,” Broach says. Thomas was promoted to fire chief, so Broach ran codes by himself for about 10 years or longer.

Probably the most enjoyable part of his job was being appointed by former City Manager Ed Music as the Americans with Disabilities Act coordinator, back in ‘91. “I enjoyed being able to help people who had a disability and were having problems,” he says, whether that related to their place of employment, access to a local business …

“A lot of times, people are unaware of what the federal law is on ADA. It’s not that they’re against it, just unaware,” he says, and he was able to educate many on it.

“And demolition — getting those houses demolished and on the ground, cleaned up. Those properties in major plight, they just bring property values down.” 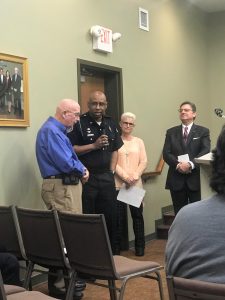 Photo contributed
Tom Broach, left, listens as Police Chief Tony Gray speaks in his honor during the last Danville City Commission meeting. Broach was first a police officer before he came to work for codes. Codes director Bridgette Lester stands to the right, along with Mayor Mike Perros.

“They have been on board with cleaning up the neighborhoods. If there’s a way for renovation, fine. We don’t want to put it on the ground, but sometimes you just can’t (renovate) … Can be money, location, change in ownership … “ he says. “But that group (city staff, commissioners) have been instrumental in helping get rid of some of these structures that are absolute plights on the community — and they don’t speak for Danville. We’ve done a number of those, and I’m very proud of that; the neighbors are very appreciative.”

But there are some parts of the job he didn’t enjoy so much, too — like dealing with those who, for one reason or another, don’t take care of their property.

“… either a house or an apartment, and you go in and it’s completely filthy, nasty, dirty, smelly. Didn’t enjoy that. You’re wearing universal protection mask, gloves, feeties on your feet, so you don’t track anything back into the vehicle or city hall. Some have been so bad we’ve had to use what we call a space suit, that has you completely covered.”

Broach says you can usually tell what a property is going to be like on the inside when you pull up. He’s encountered needles, drugs, guns … But, it’s all part of the job.

“Danville is a unique community, and we take a lot of pride in how this community works,” he says. He’s quick to point out — it’s not just code enforcement that “runs out here and makes everything pretty and nice.” Broach says many other organizations have made sure to help.

“It’s everybody working together, all interwoven. It works, you can tell. There’s some black eyes here in Danville — some areas that need a little bit more love and attention,” Broach says, but of course the city has grown, too. He was assigned to his codes detail in 1987, so he’s seen many changes. One of the biggest is the computer system they are now using, which enables them to attach photographs to case files and track histories on properties.

“It’s hard to argue against photographs … using them has cut down on our court time quite a bit. That’s been huge for us.” Information is sent to violators on what happens if they don’t comply — an ordinance was passed creating a monetary citation, which, if not paid, turns into a lien against their property.

“When Geroge McClure was county attorney, and (Darren) Peckler was district judge, they took code violations very seriously. Since then, all these people who are in now — they have been seriously environmentally conscious … I’ve never lost anything in court. Never lost a case I’ve had, and I’ve had three jury trials since 1987, and won all of those,” he says. When pictures began being used with juries, Broach says he was amazed.

“Juries really want to jack up the fine when they see what we’re dealing with, the judge had to tone them down a bit. That’s fantastic. I’ve heard about other counties where they can’t get the county attorney’s or judge’s help,” he says, which can turn into life-threatening codes in some situations. Now, he says Judge Jeff Dotson has been enormously supportive, as well.

“Usually by the time someone reaches court with us, they’re already in compliance. But he tells them, he doesn’t want to see them in his court again. And you don’t. You don’t see them again — at least not on property violations,” he says.

Overall, Broach thinks the community is in good shape. “But you can’t rest on your laurels. You’ve got to keep moving forward …” he says. He talks about residents’ pride in their community; how we have a world-renown college, with Norton Center which brings in international shows. “It’s beautifully preserved here with maintained historic homes.” He touts Perryville as “fantastic,” with its rich Civil War history; and the great schools here locally. 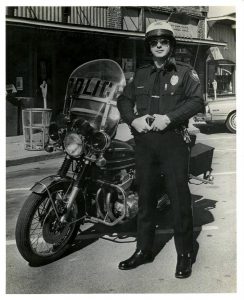 Photo contributed
Tom Broach in 1973, when he was a motorcycle policeman in Mississippi, where he’s originally from.

Broach says by working for Danville, he was encouraged to finish his education. “I’ve got two degrees and am certified in economic development.”

Code enforcement isn’t glamorous, Broach says. In the course of a day, he might have gotten 20 questions — “‘Can I have chickens? Do I need a permit for a fence? My neighbor’s dog barks at 3 a.m., what do I do?’ And we have to know where to send them. It takes experience and knowledge, we’re out here to serve the public.”

Broach says he already misses the people he worked with. “… firefighters, deputies, the EMS guys … I’ve worked with all of them. We’re all under different umbrellas, but in the end, we’re all under a giant umbrella because we have to take care of one another. They’ve always been there, and I knew I had a good, solid backup if I needed it.”

Broach’s son, Chase Broach, is now a sergeant for Danville PD. “When he was in grade school, if I came and spoke to the class, I had to be sure to wear a uniform. He always wanted me to be in uniform,” Broach says. He says his son knew he wanted to be an officer since he was little.

“They say if you love your job, you never work a day in your life. I’ve been in law enforcement since 1971, and I’ve thoroughly enjoyed it,” Broach says. He says he was lucky enough to marry Margaret, “a Kentucky girl” and “have a Kentucky boy, even though I’m a Mississippi boy. If I hadn’t come here, none of that would’ve happened.”

Bridgette Lester, director of codes and financial enforcement, was barely able to deliver her send-off to Broach during the March 25 city commission meeting due to choking back tears. With a cracking voice, she explained how she’s worked with Broach for more than 20 years.

“He’s worn many hats and is an example of a true public servant,” Lester said. She said he’s worked under four police chiefs and six city managers, and she and others have attempted to learn as much as they can from him before he retired. 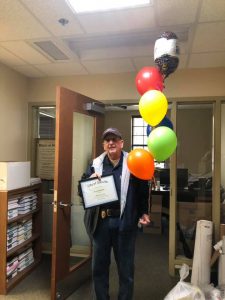 Photo contributed
Tom Broach, who retired as a code enforcement officer, holds balloons and a certificate that were waiting for him in his office Friday, his last day.

Lester explained that Broach was on dialysis for kidney issues from 2003-2006, yet hardly missed any work the entire time.

“He’s dedicated, faithful and loyal, and would give you the shirt off his back,” Lester said.

Former Police Chief Jeff Peek also gave some parting words for Broach during that meeting. He said Broach always put the city first in everything he did, and considers him “the most famous police officer there is in this city.”

Chief Tony Gray said Broach continued coming back to work for the PD even after he was with codes, functioning as a weekend supervisor. “That’s how much he loved it,” Gray said. “There’s been no one else who can better represent the City of Danville … He’s sacrificed more than we’ll ever know for the benefit of this community, and I appreciate the support you’ve given me my whole career.”

Broach says like any other city department, codes enforcement works under the premise of making the community a safer, happier place “to raise your children or enjoy retirement. And to enjoy what Danville and Boyle County’s got — we got a lot.”

It takes a lot of people working to keep the area going in the right direction, he says.

“They issued me a new fancy uniform,” Broach says. “All Chief Gray has to do is call me. I’ll put it right on and be there.”

After he was honored by the city commission March 25, for his parting words, Broach said, “In the words of Jerry Garcia, with the Grateful Dead — man, it’s been a great ride.”

Kentuckians are all too familiar with the negative stereotypes about our culture and our education that persist in the minds... read more