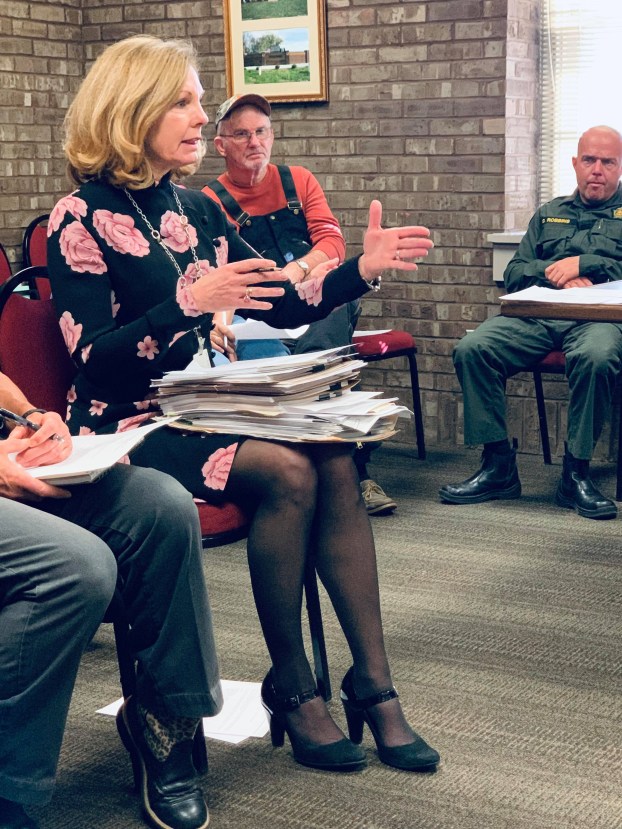 Boyle County Treasurer Mary Conley explains how the county will be reimbursed for a grant paid to the Bluegrass Area Development District, which could lead to the county's participation in the County Snowplow Tracking Project. Photo by Bobbie Curd.

Boyle Treasurer Mary Conley explained it’s through a regional grant, submitted on behalf of several counties by BGADD. She said the grant agreement is specifically for tracking devices to be installed on the bottom of the county’s dump trucks, which turn into snow plows and salt spreaders in the winter.

Conley said the plows are going to be tracked on a regional map available to the public online, so people can log on to see if their road has been plowed yet, or how close the plows may be.

“They were going to expand it to other vehicles, like ambulances, if this whole grant came to fruition and worked out the way it was intended,” Conley told the court.

The previous fiscal court committed to paying $4,902 to BGADD to pool with the rest of the region’s money. According to the letter from BGADD, the money pays for the necessary software to communicate with the hardware that will be installed, and the installation; for troubleshooting any problems, until each unit is fully functional; and providing “any other necessary service that could be construed as a natural extension of the services noted.”

Conley said once the check clears the bank, the devices will be installed and the county can submit for 100-percent reimbursement of those funds. The service will not be implemented locally until “we pay our money,” Conley said. Then, the county must decide if it’s a service they consider useful.

County Engineer Duane Campbell said the whole thing is experimental at this point, and there is a monthly service charge to keep the devices going. However, the devices can be turned off over the summer months, if not in use.

Magistrate Jason Cullen questioned the service fee, which County Engineer Duane Campbell said is $21 a month per vehicle. Judge-Executive Howard Hunt said the fee discussion is for another time; the court was just voting to move forward in paying the already-promised amount, which will be reimbursed, and then it can decide if the service is worth keeping.

“They paid about $50,000 for software to allow them to provide updates to their citizens on the schedule for snow clearance,” Duttlinger said. BGADD owns the software, he said, and is able to write a program to do the same thing.

“When utilized, citizens would be able to log onto a website from a mobile device, which would show them which roads in the county had been plowed. It is a rising field that we refer to as ‘e-government,’” he said.

Duttlinger said both the infrastructure and software exist so that in a short time, a county could be “up and running with tracking devices on ambulances, police and fire vehicles, buses or anything that would need to be tracked by a county or city government, with minimal cost.”

He said BGADD has even had a request if the devices can be used on tractors during mowing season.

Danville firefighters were called to a house fire at 511 Russell St. shortly before 3 p.m. Tuesday. The fire seemed... read more