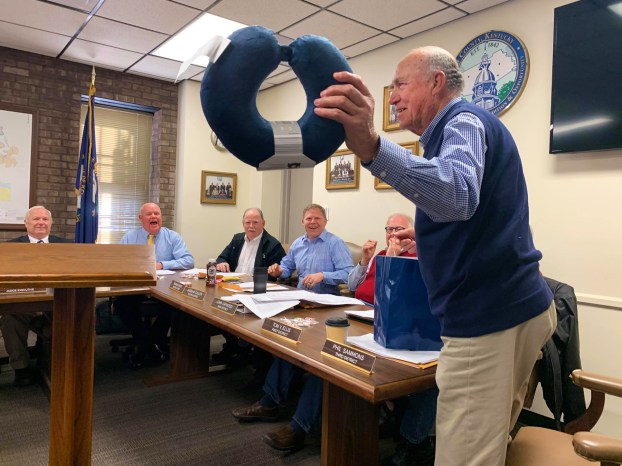 Boyle County Fiscal Court Magistrate Phil Sammons holds up the joke gift Magistrate Jason Cullen offered him "from the new guys" before the last court meeting. Sammons, who was just made pro-tem of the court, is known for getting "grumpy" during longer meetings, so Cullen said the chair pillow may help him sit through them. Photo by Bobbie Curd.

On March 26, the Boyle County Fiscal Court unanimously approved Magistrate Phil Sammons as pro-tem of the court, in order to fill in for Judge-Executive Howard Hunt when needed.

Immediately after that, Magistrate Jason Cullen said some on the court wanted to present Sammons with something.

“This is perfect timing. Us new guys have been going on pretty long and I felt bad about it. We wanted to get this from the new guys to kind of help you out during the court meetings,” Cullen said, referring to the length of the meetings in recent months.

Sammons, who is known for getting “grumpy” during longer meetings and using the phrase “moving right along,” opened up the bag and pulled out an orthopedic “donut” seat cushion. The crowd and court erupted into laughter.

Although last week’s meeting was about three hours long, Sammons did not use the cushion.

A “little bit of courage” and an old gas station is all it took for Gina and Ronnie Melton to... read more