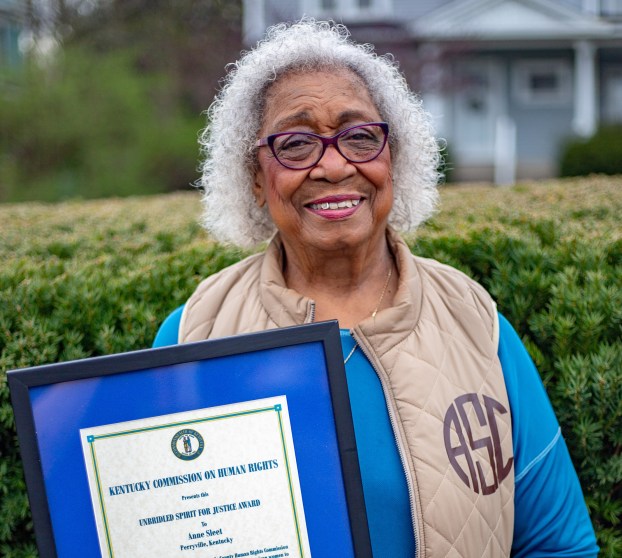 Anne Sleet stands with her award from the Kentucky Commission on Human Rights, which she was given for serving on the Boyle County Human Rights Commission and as Perryville's mayor. Photo by Ben Kleppinger.

The Kentucky Commission on Human Rights has recognized a well-known Boyle County woman as an “unsung hero” for human and civil rights.

Anne Sleet, former mayor of Perryville and a member of the Boyle County Human Rights Commission, was given an “Unbridled Spirit for Justice” award at a special event celebrating Women’s History Month in Bowling Green on March 21.

Lt. Gov. Jenean Hampton was the featured speaker at the event. Sleet was one of 13 given Unbridled Spirit awards, which recognize “the work and accomplishments of the dedicated, courageous men and women working behind the scenes in the human and civil rights arena; the unsung heroes throughout the commonwealth.” 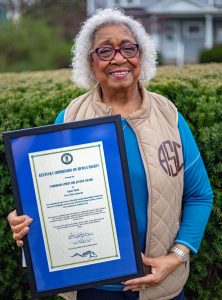 “These individuals are often overlooked, unseen and unknown,” according to the awards program. “But without them, much of the advancements in the field of human and civil rights and social justice would not have been and cannot be achieved.”

Sleet’s award was given specifically “in recognition of her service to the Boyle County Human Rights Commission and her trailblazing service as one of the first African-American women to serve as mayor of a Kentucky city.”

Sleet served as Perryville’s mayor for 12 years; she did not seek re-election last year.

Sleet said she was surprised by the award.

“I got a phone call and they said I’d been nominated for an award,” she said. “I got the letter on the following Monday and the following Thursday, I had to be in Bowling Green … I knew it was Women’s History Month, but I didn’t give that a big thought. I was grateful and I was really thankful that they thought about me.”

James Hunn Sr. is chair of the Boyle County Human Rights Commission, which he said exists to ensure everyone’s rights are protected and people are treated equally. He said Sleet has served on the commission as long as he has and always “gives her views and opinions on things that need to be discussed.”

Kathy Miles, another member of the commission, said, “Anne is a wonderful and strong woman and we are lucky to have her in our community as a role model.”

The Kentucky Human Rights Commission’s goal is “the complete eradication of unlawful discrimination within the borders of the commonwealth,” according to the program.

Sleet said the Boyle County Human Rights Commission meets every fourth Monday to hear from anyone with complaints or problems.

“They bring it to us, then we go over it and through it and see what we can do to help a person out,” she said. “… We haven’t had any issues for a while.”

“People are nice, but they don’t have to be nice to you,” she said. “People have been nice to me and I am so grateful for that.”