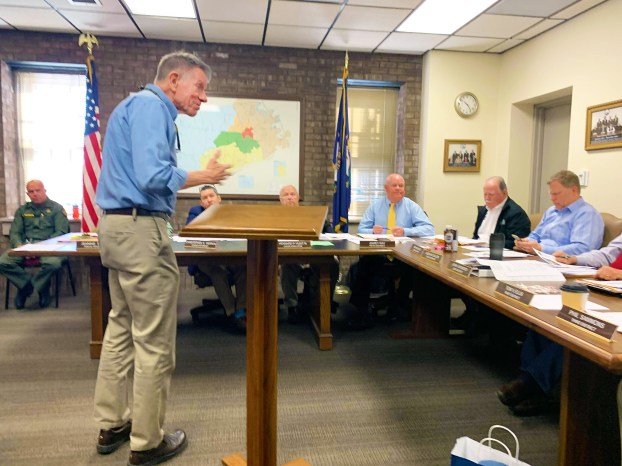 Milton Reigelman, a member of the Danville Sister Cities group, gave the Boyle County Fiscal Court an update on its programs and what's to come during the court's last meeting.

Milton Reigelman, a member of Danville Sister Cities Commission, gave an update on the organization for Boyle County Fiscal Court during a recent meeting.

“You’ll be happy,” Reigelman started. “I’m not here to cajole even 1 cent from you.”

He explained how in 1956, President Dwight Eisenhower began citizen diplomacy programs during the height of the Cold War. “We need it now,” Reigelman explained.

He said the state has two large sister city programs — in Lexington and Louisville — with paid staffs. “But Boyle County has the really only active sister city organization outside of those two,” he said. “We had the state meeting here last fall, with 35 people from around the state. Eight cities or counties have sister cities in the state, and we’re by far the most active.”

He said the organization has “financial support from the city — just a little bit, but it’s enough.” It’s mostly supported by “70, 80, 90 citizens, most of who live in the county and not the city.”

Reigelman said donations are received yearly from a funding letter the organization sends out, and “fundraising this year is going better than ever.”

As he passed out the new donation request letter, Reigelman said the former mayor of Carrickfergus was named Patricia McKinney. “And even though I taught Harold (McKinney, former judge-executive) when he was a youngster, I never got him to support us in any way at all. So I’m hoping this court will be a little better,” he said, which created some laughter.

Reigelman said the group is in planning mode right now. It plans to start a student exchange where high schoolers will go to Carrickfergus for a week, then come back to the states with their host student for a week.

“We also want to start a youth art program. Art is a big part of this community,” he said. The Sister Cities Commission has sponsored three trips to Northern Ireland so far, at relatively low cost.

“And there have been more people who live in the county to go on those. I think it makes Boyle County pretty unique in the whole state, and I thought you should know about it,” Reigelman said. “And we would love any kind of support.”

Magistrate Phil Sammons said he is interested in taking a trip through the organization, and noted his family had a young student from Northern Ireland stay with them in the past when his daughter went to Centre. He said he and his wife would like to plan a trip as soon as next year.

Reigelman said there may be a sister cities trip offered within the next year, to which Sammons said he’d “like to get in on that. You know, it may save us a little money.”

Judge-Executive Howard Hunt wondered if there was anything Boyle could do to have a relationship with the county Carrickfergus is located in.

“What we really have a relationship with is the people in Carrickfergus, which are from that county,” he said. “If you’re Protestant and from this part of the country, your people came from Carrickfergus, or stopped there.”

Reigelman said Carrickfergus was selected “after 18 years of trying to find the right place, and because of its connection to Danville.”