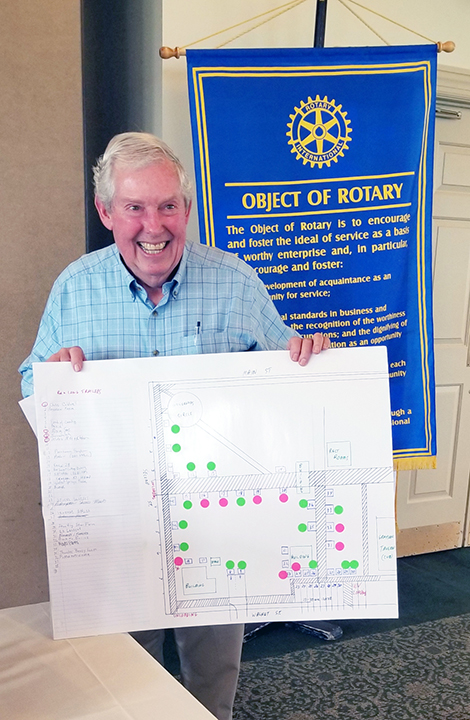 Photo contributed Board chair for Boyle County Farmers Market spoke to the Danville Rotary on March 29 about the changes to the market that will be introduced this year.

Retired Dr. Russ Goodwin, board chair for Boyle County Farmers Market (BCFM) spoke to Rotary on March 29 about changes that will be introduced in 2019. To set the stage for his presentation, he began by updating on BCFM shifts in the recent past. For the last couple of years, the farmers market has been held in Danville High School’s parking lot. Before that the organization was out on the bypass next to the Fairgrounds for several years. Three years ago, the market moved downtown on Third Street across from the Derby Shoppe.

Over the years, the farmers market has grown a little bit each year. Last year, they grew quite a bit, which stretched their ability to stay at the high school. The board discussed moving back to the parking lot off Third Street. In January, the fiscal court and the Convention and Visitors Bureau asked the board if they would like to go to Constitution Square. It had been tried some years back and it didn’t work out. However, since BCFM’s move to Constitution Square failed, experience in several rural communities has been very successful. Everyone involved in wanting to reconsider returning to that location realized that if it could be made to work, it would be a good deal for the  farmers market and the local economy.

Stacy Miller, program advisor with the national Farmers Market Coalition, is an advocate of moving  farmers markets downtown, because of the impact many communities have experienced in launching new products and bring in new enterprises. A case in point happened in Corbin six years ago. At that time, Corbin’s leadership invited the  farmers market to move downtown. The move was motivated by a failing local economy: the downtown was only 60-percent occupied, with 40 percent just bare windows. Within two years, downtown Corbin was down to 2 percent unoccupied and had three new businesses previously with the  farmers market. Today, it’s hard to find a parking space on the 1.5-mile length of Corbin’s Main Street.

BCFM membership has 30 vendors this year, up by eight to 10 from 2018 and six to eight from 2017. A lot of young people are joining. Young families bring a variety of produce and some arts and crafts. Several of the local restaurants are using farmers market products, including meats, vegetables, herbs and even some flowers.

This year will be a little different experience for vendors and customers alike. Goodwin showed the layout drawing to begin discussing the pending changes. Parking for vendors and visitors was the most challenging issue brought by stakeholders. The drawing provided the final parking arrangements. Some vendors will park along Second Street and set tents up inside the park so that the customers can come down the sidewalk and see what they have. Others will park along Main Street, and some on Walnut Street in spaces behind the park. This year, each vendor has a defined parking spot. Visitors to the market will have ample nearby parking. A block and a half away, visitors can park in the parking garage (it’s free on the weekends). Parking is also available all along both sides of Main Street.

Another change coming is the increased use of social media. Vendors will be able to send emails announcing if they are coming and what they are bringing, such as flowers, honey, meats, vegetables or crafts. People can sign-up to receive an email every Friday morning. Signup sheets will be available at every vendor’s booth.

The 2019 BCFM season starts on May 4 (also Derby Day), which is a little bit later than in the past. Last year, it opened in April and it snowed on two of the four weeks in April. There aren’t very many tomatoes or other vegetables at the time either. Goodwin shared a little secret for those who want an earlier access: “We’re having a soft opening the week before on the 27th, where everybody is going to kind of go set up and see how they get to their spot and how everything works.”

There is a plan to install a permanent sign for farmers market displaying days and hours of operation.