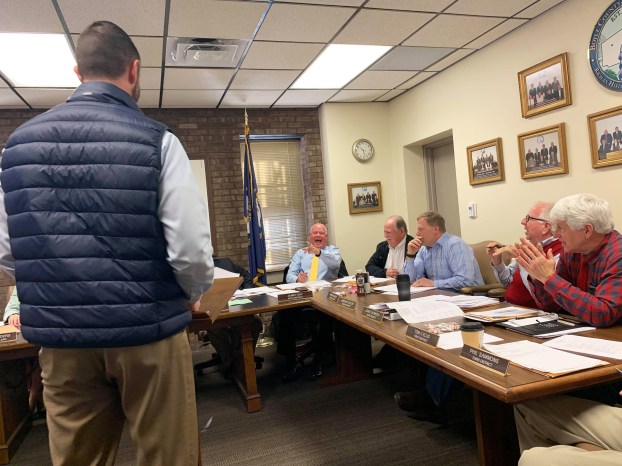 Bryce Perry, chair of Danville-Boyle County Parks & Recreation, shares a laugh with Magistrate Jamey Gay during the last fiscal court meeting. Perry gave an update to the court, including that the board is closer to hiring a director out of three to four strong applicants it is considering. Photo by Bobbie Curd.

Bryce Perry, chair of the Danville-Boyle County Parks & Recreation Board, gave the fiscal court a first-quarter update recently. He said the subcommittee created to help with the director search is finished with its duties.

“We have it down to three, four very strong candidates,” Perry said, which he hoped the board would approve soon and move forward on. “There is light at the end of the tunnel. We can see, and it’s getting pretty close.”

He said youth basketball season has wrapped up, and Parks & Rec saw more participants at some levels this year than it had in the last three or four.

Cheerleading was also up in numbers, Perry said, which he called encouraging. “We had our audit completed in January and presented to the board, which was approved,” he said.

Parks & Rec has started sign-ups for baseball and softball, T-ball, coach pitch and Cal Ripken leagues, along with ordering all the supplies needed.

“Those numbers, especially with Cal Ripken, are looking up,” Perry said.

He said supplies have been ordered to get the tennis courts cleaned up. “There’s been some interest in getting that going strong in the spring and into the summer,” he said. The agency is also in the process of ordering banner sponsorship signs that need to be updated.

“We also had to purchase a new ice machine for the pool concession stand; the other was old and outdated, not functioning well,” he said, referring to the Bunny Davis center. “It will be here and ready to roll once the pool gets opened up.”

A new computer also had to be purchased for office employees to use, he said.

“I want to touch on this — this is important because I think you get a little flack from other areas of government,” Magistrate Jason Cullen told Perry. “You guys have been without a director since August. And you’ve had several people who are essentially volunteering hours to help make this a phenomenal year for Parks & Rec. You’re busier than ever … and things are still on track.”

Magistrate Phil Sammons also said he appreciated the amount of work Perry had done in such a short time after becoming chair of the board.

“I appreciate that … it’s not just me, we’ve got strong people on our board. Our employees have done great … All we could expect is try to stay afloat, but our employees have gone above and beyond that,” Perry said. “The programs have been expanding without a director and being short-staffed …”

This week, Perry said there are no further updates on the director search to be announced.