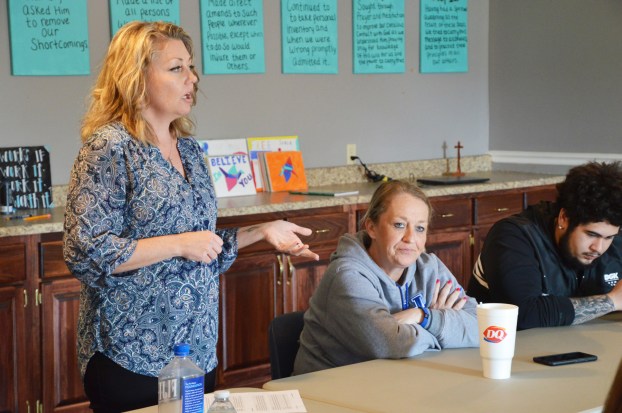 The program director of Shepherd’s House didn’t know what to think as the newest members of Boyle County’s government took their seats this year.

“We were nervous about what would happen, with the judge-executive and county attorney — basically the whole court flipping over,” Roger Fox said.

The last court, under Judge-Executive Harold McKinney, was supportive of Shepherd’s House, especially since it came along at a dire time for the Boyle County Detention Center; it was overflowing with more than 400 inmates, nearly twice its intended capacity. A deputy jailer recently said he recalls walking through one of the general areas and stepping over people who were body-to-body on floor mats.

During the overcrowding, Jerod Thomas, CEO of Shepherd’s House — which was only in Lexington at the time —  was at the detention center when longtime Jailer Barry Harmon, now retired, was attempting to figure out a solution. Thomas said he and Harmon went through inmates’ files, pulling out file after file of people with an addiction disorder. 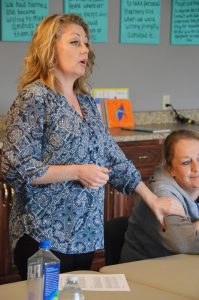 Thomas and Harmon worked to bring Shepherd’s House to Danville, which eventually landed under Fox’s leadership, who is from the area.

“It’s rare — a jailer is usually like ‘stay in jail,’ you know?” Fox said. “He saw the big picture. He’s all about helping people, and it’s huge. Without Barry, it wouldn’t be happening.”

Today, Boyle County has a new judge-executive, four new magistrates (out of six), a new county attorney and a new jailer. But it turns out Fox and Thomas didn’t need to be worried.

Since the non-residential drug treatment center opened in Danville two years ago, 57 people have graduated from the program, which at first only treated inmates who met the criteria. Now, their doors are open to the general public, filling a void locally of centers offering continued support for those just finishing up a residential program.

This Friday, new Boyle County Magistrate Jason Cullen will be grillmaster for the afternoon of the center’s second anniversary; he’s even donating all of the meat. New Judge-Executive Howard Hunt says he couldn’t imagine not being there to show his support for what they’ve been able to accomplish.

County Attorney Chris Herron has been working closely with Fox, offering diversions for those arrested on non-violent drug charges. Fox attributes Herron’s help in getting treatment to those who need it, are ready and want it — before they become just another statistic.

“They’ve all been great, and very open to what we’re doing,” Fox said about the court. “We’ve had a lot of good conversations.”

He says more programming inside of the jail is coming, with help from new Jailer Brian Wofford. “It’s like a community on a mission,” Fox said.

“This was a no-brainer for me,” Cullen said about why he chose to participate and donate. He said the Shepherd’s House has been “a huge addition to our community, and I love what they are doing.” 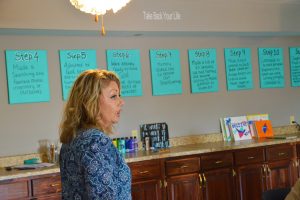 Blevins leads group in the discussion. Photo by Bobbie Curd

Hunt agrees. “I think it’s important that the entire community see their elected officials showing support of Shepherd’s House, because they have done such great work in the time they’ve been here.”

Both officials say Fox’s story — graduating from the Shepherd’s House program in Lexington after being released from prison and going on to become its director in Danville — is amazing. “He battled so much … he’s a living example that if people truly want to change for the better, they can,” Cullen said.

From addiction to graduation

On Friday, six spring graduates will be honored during the shindig. Fox can’t help but smile when he talks about them.

“We feel like this group of grads — we put a lot of work into them. As we get better as a program, they get better. The stuff that we can offer and the things we can do, really makes a difference,” he said.

The grads will be given a send-off by Peer Support Specialist Hilary Blevins. “I cry, every time,” Blevins said in Fox’s office.

But down the hall, she stands tall and firm in front of clients during a group session on Tuesday. She’s open and giving, but it’s obvious she makes them accountable for their own healing.

They are tired; some are downing Mountain Dew. 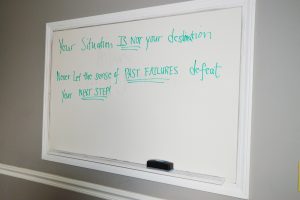 Words of encouragement are written on a white board. Photo by Bobbie Curd.

One man cries while talking about being homeless, after just having completed the first step in an AA group — admitting he’s an addict. The guy beside him reaches out and places his hand on his shoulder, and he cries harder. Then he says that in a way, he’s happy, because he’s ready now. He wants to be clean.

Blevins tells them they must let down their guard and begin to trust again; there are so many people out there who will care, if they will only give them a chance to.

She tells them they’ve got to speak up like this in group sessions, whether there or at AA. She knows they’ve done things they regret, and that they’ve been taken advantage of, used and some of them abused. Their faces show it.

“I know because I’ve been there,” Blevins tells them. One of the women begins to cry as she opens up about a relapse, and the group talks her through it.

Blevins chooses to encourage her, saying it sounds like most stories — including her own — of what your very last relapse is like.

“You will remember this feeling,” she says to the client, who shakes as she wipes off her tears. “Do you want to feel like this for the rest of your life?”

She cries harder, and says no.

Blevins, originally from Mercer County, became addicted to pain pills after an injury sustained during a c-section to deliver her twins.

“I started doctor shopping for opiates, buying from the internet. I got in trouble with Kasper,” she said, referring to the prescription monitoring system. “I was selling and buying.”

A panoramic shot of the group room.

She lost everything. “I got divorced. Lost my kids, lost my car, my job.” Her mother, Dawn Osborne, has been in recovery for about 28 years. She talked to Blevins about treatment.

“I was homeless, had no running water or electricity. I was sitting in my apartment after my boyfriend had just went to jail.” Aside from drug abuse, she was also in an abusive relationship. Her boyfriend eventually overdosed and died.

“I ended up going to AA here, and ended up getting sober,” Blevins said. She got a sponsor, and she worked the 12 steps.

“Then I got this job, and here I am,” she said. She went through training in Lexington, and applied to Shepherd’s House as soon as she finished.

Fox says you just know when someone has a passion for working with people on this level.

“I knew I needed a woman, in recovery. If you take these women who are coming from jail, and you don’t show them someone — here’s proof, here’s facts, it works — then it won’t get through to them,” Fox said. “She knows how it feels to lose her kids and be homeless.”

Blevins also works to find people in-patient programs who turn to them when they don’t know where else to go. She’s developed relationships with many treatment centers, and follows up on people.

Cullen said, “Second chances and hope are what everyone in this world needs, and that’s exactly what Roger, James (Hunn, with Circle of Hope), Hilary and the rest of those at Shepherd’s House are giving out on a daily basis.”

“When you have somewhere in the neighborhood of a 72-percent rate of being clean after two years of measurable time, by going through their program, that’s pretty awesome stats when you think about it,” Judge-Executive Hunt said. He said he was just kidding Fox the other day, saying he was “mining for gold” in courtrooms.

“By going to court and seeing who he can secure to go through the program, and seeing who really wants to change their lives, he’s had success,” Hunt said. “My hat’s off to him and Hilary —  everybody associated with Shepherd’s house.”

A two-year anniversary party and graduation ceremony for Shepherd’s House in Danville is open to the public, noon-2 p.m. Friday at 454 S. Third St.

The 20th annual Shepherd’s House Run for Recovery, its biggest fundraiser, will be 8 a.m. July 27 at Keeneland Race Course in Lexington. The center is also looking for businesses or organizations that would like to become sponsors. For more information and to register for the race, visit www.r4rky.com. To find out more about becoming a sponsor, contact Jerod Thomas at (859) 252-1939 or (859) 537-8680.