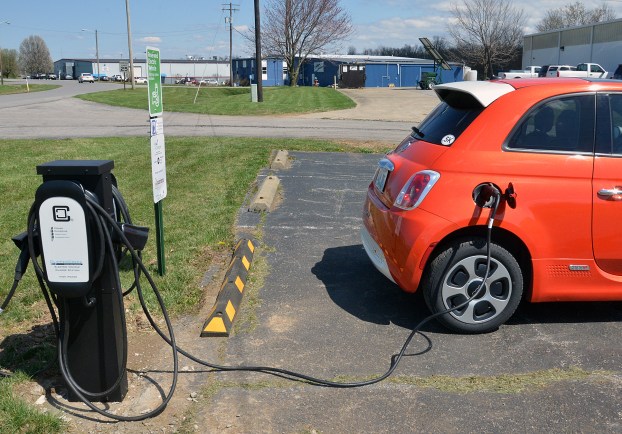 Laura Zaspel, office manager at Wilderness Trace Solar, charges her Fiatt 500c at WTS. The dual port charging station is available for the public to charge their EVs for free while they're traveling through Boyle County. Photo by Robin Hart.

Wilderness Trace Solar company has installed a dual port, solar-powered electric vehicle charging station that’s free for the public to use. It’s located in the WTS parking lot in front of its headquarters, on the corner of Stewarts Lane North and U.S. 127.

“For people who are traveling through our area in their EV (electric vehicle), this will be a convenient opportunity to stop and charge for free. And it will make a good impression of Danville,” WTS office manager Laura Zaspel said. 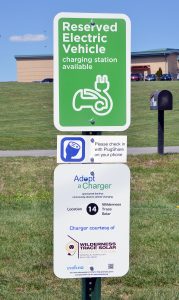 Wilderness Trace Solar has installed a dual port electric vehicle charging station that is free for the public to use. WTS is located at 70 North Stewarts Lane. Photo by Robin Hart.

Electric vehicles are much more popular than many people realize. But the presence of public EV charging stations in Kentucky “are weak at best,” she said.

“We know there are many EV drivers commuting and traveling down Highway 127 daily. Installing a free, dual port J1772 EV charger here just makes sense. EV drivers depend on the ability to charge when they plan their routes,” Zaspel said. EV drivers who come through Danville and Boyle County on their way to doctor appointments, meetings and even on the Bourbon Trail need a place to charge their vehicles, she added.

“We want to keep the EVs moving forward but we also want them to stop in Danville. We want to be part of the forward motion, future-thinking, tech-embracing renewable energy efforts being made right here at home.”

Zaspel said Wilderness Trace Solar will hold a public ribbon-cutting ceremony to officially unveil the station in the near future. At that time, people will be able to see how a charging station works.

WTS adopted the public EV charging station from EVolveKY, a non-profit, grassroots organization founded in Louisville. It gets organizations to sponsor and install EV chargers for free as a means to enhance the EV charging infrastructure throughout the state, according to a WTS news release.

Zaspel, along with Shannon Causey who also works at WTS, drive their EVs to work every day, and they’re both members of Lexington’s EVolveKY group. Zaspel said they are “thrilled” to have a solar-powered charging station at work, and to be able to offer it for the public to use, too.

EV drivers have to be mindful of where they can charge when planning trips, so they depend on a free app, PlugShare.

Once you set up your account at plugshare.com, you can see maps of every EV charging station making it easy to plan your route, Zaspel said. When you click on a green pinpoint, information about the charging station location pops up and includes the type of plugs available, hours of operation and nearby shopping and eating locations. There are also lists of people who have checked into that location and have left comments about their experience.

The PlugShare map shows there are four EV charging locations in Boyle County: 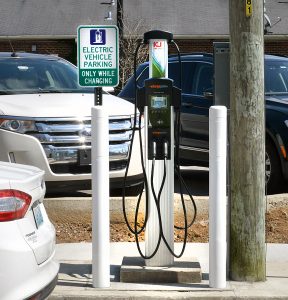 Kentucky Utilities has installed a dual port EV charging station on Fifth Street near Main Street. Danville’s Director of Code Enforcement Bridgette Lester said people who park in the spaces but aren’t actively charging their vehicles will be ticketed. Photo by Robin Hart.

• a dual-port charging station in the first two parking spaces on Fifth Street right off of Main Street (installed by Kentucky Utilities);

Zaspel said the playhouse location is really the type of electricity outlets at the campground that could be used in case of an emergency if the EV driver had the right adapter.

KU’s dual-port charging station on Fifth Street costs $2.84 per hour, and with added taxes the price comes out to $3.20 an hour.

The City of Danville agreed to give the spots to KU for the charging station and has put up signs that read, “Electric Vehicle Parking Only While Charging.”

“We’re trying to help people understand they can’t park there unless they are charging a car,” Lester said. “It’s something new and different.”

Lester said her office has tried to spread the word throughout the Centre College community and through social media, but drivers are still parking in the spots illegally. “It’s just like a gas station,” Lester said, so people can’t park there unless they are charging.

Even if an EV finishes charging, they can’t just stay there, Lester said. If they do, then they’ll get a ticket, too. 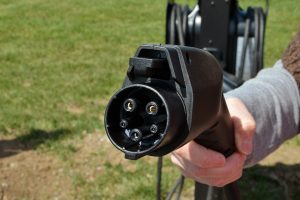 The plug at WTS fits many EV models. Photo by Robin Hart.

She said when EV drivers encounter the problem, they say they’ve been “ICE’d” — an acronym for internal combustion engine.

EDITORIAL The Advocate-Messenger We’re all familiar with the concept of hackers breaking into computers, but now there’s a growing threat... read more