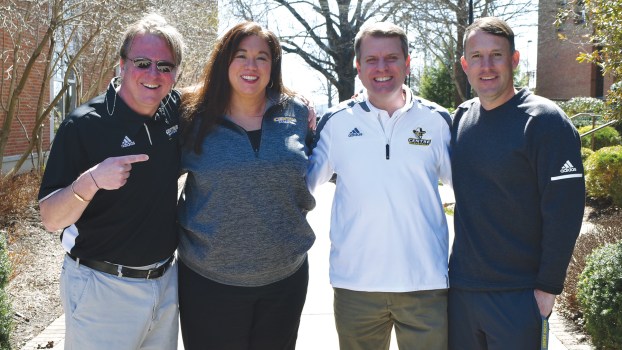 Having a successful student-athlete become a Division III college coach at his or her alma mater is not unusual. Having a former athlete become a successful coach at the athlete’s alma mater happens, too. But to have four former student-athletes coaching at the same school where they played and for all four to become the school’s all-time winningest coach in their sport is unusual.

“They are good and strong and highly successful with their work, and, most importantly, they understand that their first ‘job’ is to be involved in ‘building better young people’ by way of the students’ involvement in sport,” said Roush. “Wendie, Jeb, Jay and Greg send a powerful signal with their teams and beyond that Centre College athletics is about two things – in order of importance: using intercollegiate sport as a way to build tomorrow’s citizen-leaders and win championships. It has been a pleasure to watch them teach and coach and change young people’s lives for the better.”

All four coaches agree that they never really thought about how much they might win when they became head coaches.

“When you start a career you are really are only thinking about winning that first game. The first few years your goals are so focused on day-to-day operations that the last thing you think about is breaking any records,” said Hoffman, a 1996 Centre College graduate.

Mason played at Centre College for Tom Bryant, the former all-time winningest coach. Mason said he never thought about one day breaking Bryant’s record until last season and did it this year. He now has a 387-149 mark, including 23-5 this year, since becoming head coach in 1999.

“When you are a 27-year-old first-time head coach, your thought process is, ‘Okay here’s my opportunity let’s start building this program the right way.’ My daily thought then was recruiting and building our program’s culture and daily expectations,” Mason said.

Austin-Robinson helped Centre win four straight conference titles during her playing career and became the head basketball coach in 2005. She has won 182 games and never thought about how many games her teams might win.

“I just wanted to get to work when I became the head coach to carry on the tradition of the coaches before me,” Austin-Robinson, a 1994 Centre grad, said.

“I wake up each day thinking about how I can make things better within and around our soccer program. That has kind of been my blinders over the years but I never thought about the number of wins I might get,” Burch said.

Roush thinks there are four reasons the four have been so successful:

— “Each of them are students of their game; that is, they are technically sound.”

— “They do all they can to surround themselves with quality people – assistant coaches and, most importantly, players who are talented, aspire to be a part of championship teams, and are determined to secure a first-rate, rigorous undergraduate education.”

— “They have ‘stayed ‘round’ long enough to build a tradition for excellence that is easily observed and appreciated and desired.”

— “They have discovered ways to make the ‘work’ of their sport be complimented by finding real joy in the experiences that are had, the friends that are made, and the lifetime memories that are gathered up. Who would not want to be part of such a team!”

Hoffman considers himself lucky to have been surrounded by “amazing” coaches at Centre.

“Wendie, Greg, and Jeb have continued to instill in me my passion for Centre, for coaching, and winning,” Hoffman said. “I am honored to coach with them as they make me a better person. Their will to win and unique coaching styles help shaped who I am today. I consider each of them a very good friend and am honored to work with them.”

The four coaches shared their insights on a variety of other things about coaching at Centre.

Question: What has kept you at Centre coaching long enough to become the wins leader?

Hoffman: “Danville is an amazing city to raise a family and my heart has always been with Centre. There is a certain love for the school that can’t be described. When you have a wonderful city and a great institution to work for, you tend to realize you don’t have to look at the grass on the other side.”

Burch: “The people. I feel like I have a little bit of a relationship with most people around campus. I am fortunate to always have a great group of players to work with each year and I really enjoy living in Danville.”

Mason: Family and friends were a huge reason I decided to attend Centre in 1990 and family and friends are a significant reason why I have stayed for 20 years now. We’ve been blessed to have so many outstanding players whom I have genuinely enjoyed being around on a day to day basis.  Our success on the floor has been better than I could have ever imagined the day I was hired in 1999 and the reason for our success has been the talent and the daily sacrifice of so many great players. One last significant reason for my staying so long is the leadership of President John Roush and his bride, Susie. His leadership, kindness and ability to connect with so many on our campus has been a blessing to Centre College. Our college and my life is better for the 20 plus years he has been our leader.”

Austin-Robinson: “I love this place and love how it changes the lives of everyone who is fortunate enough to be a part of Centre.”

Question: What makes coaching at Centre unique, maybe even challenging, for you but also makes you like it so much?

Austin-Robinson: “The academic standards Centre demands compared to a lot of other Division III schools we recruit against. Watching our student-athletes succeed while embracing both the academic and athletic challenges Centre presents is very rewarding.”

Hoffman: “We are very fortunate to have an athletic director and administration that sees the value in athletics and tries to make our experiences the best they can be. We are very fortunate to have the facilities and the support. When you have a great academic institution, great facilities and a program that wants to win, what is there not to love.”

Burch: “My audience has changed and that has required adjustments on my part as a coach. And some of those changes happen fast which requires being fleet of foot. I don’t always get it right, but I definitely enjoy the process of trying to bring together a team to go win games, especially on the road.”

Question: When you are recruiting, what is the best selling point for you about Centre athletics and Centre overall?

Burch: “One of my sayings is…market data outperforms product data every time. My market is prospective players. My product is Centre. I spend my time trying to understand the market and what they want, rather than try and sell Centre. Once I know what they want, I then present those areas of Centre to them.”

Mason: “When you mention Centre within the state of Kentucky, there is an immediate level of respect and awareness of what our college represents. People around the state realize that Centre is a place of excellence in so many areas. Our basketball program has been one of the elite programs in all of Division III for many years. When we also let our recruits know that our record is better than Louisville over the last 16 years and almost as good as Kentucky during that time, we generally have their attention.”

Austin-Robinson: “For all of our students, being able to get a nationally ranked education and continue to play the sport that they love is something that is one of our best selling points. While at Centre, our students will have great support from the campus community, and while I hate to use the term ‘Centre-mafia.’ our students have a readymade network all over the world.”

Question: How has it helped you as a coach that you were also a student-athlete at Centre?

Burch: “Centre forced me to become engaged. I could not just go to class and sit in the corner. Go to practice. I was forced to do more and take a more active part in my experience. You don’t realize at the time what that is doing for you, but that is the education within the education at Centre. What I tell people is what you learn in a class some Wednesday afternoon you probably will not remember. But how you went about getting a good grade in that class, along with being a good friend and soccer player, that is the stuff you will carry with you forever. Once I graduated, I realized the life skills that Centre had forced me to develop.”

Austin-Robinson: “Because I’m an alum myself, I understand the academic rigors and daily schedule our athletes go through. My firsthand experience allows me to help them navigate through the daily grind of being a Centre student-athlete.”

Mason: “Centre is a very unique school in many ways. Those of us who attend and play athletics understand better than most anyone else. Those times on campus from 1990-94 have really helped me with an empathy at times for our student-athletes. I know what it’s like to have the week before fall finals be a week of three tests and two 10-page papers. I don’t care how much one plans ahead, that is a week of stress. Having been a former student-athlete here, we just have an understanding and appreciation for the demands of being a student here. It’s totally unique.”

Hoffman: “It is so important that the players know that both (associate coach) Jess (Chisley) and I were student-athletes. We know what it was like to go through the expectations in the classroom. This allows us to know when to press the gas and when to let up a little. Coaching women’s soccer is all about chemistry and making sure to eliminate stress. Because we went here, we feel we know how to eliminate a lot of the stress. Player’s know that we want them to succeed both on and off the field.”

Question: How proud are you when you look at the success so many of your former athletes have in the business world after they leave Centre?

Austin-Robinson: “Probably the main thing that keeps me doing this year after year is watching our young women grow into professionals and leaders after graduation and continuing my relationships with many of them after they have left Centre.”

Burch: “It swells me up and I turn into a crying baby. They are the only reason I coach. I love my players.”

Mason: “I’m amazed and also proud of the success of our former players in life. I’m not surprised as we’ve had a number of very talented people join our program and then when you combine the Centre experience, there is a level of confidence that our players are going to impact the world once they leave here. And we have so many great stories … successful doctors and lawyers. We have a country music star and a reality TV show star. One area that has pleasantly surprised me is the impact our former players have had on big-time college athletics. Just very recently, our former players were on the basketball staffs at Kentucky, Louisville and Virginia. In my opinion, those are three of the best 10 programs in all of college basketball.”