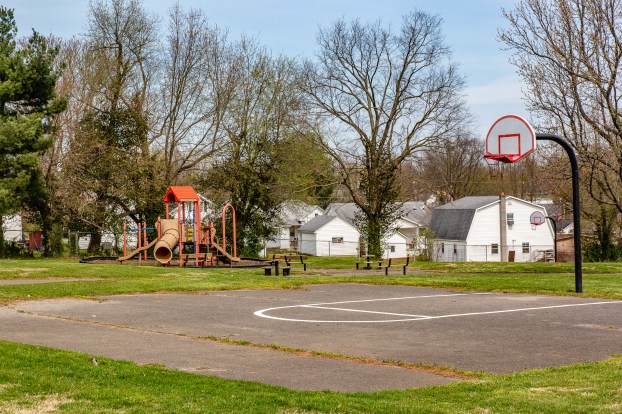 The lawsuit alleges Corning and later Philips, dumped waste containing hazardous materials such as lead, arsenic and TCE on the area that is today Cowan Park. Photo by Ben Kleppinger.

Corning Inc., Philips North America, the City of Danville and additional unnamed businesses or individuals have been named in a lawsuit that alleges they caused and concealed hazardous substances that contaminated property surrounding the former glass manufacturing factory on Vaksdahl Avenue.

Plaintiffs in the lawsuit filed March 29 in Boyle Circuit Court include Modern Holdings LLC; Sellers and Sellers Co., who have property near the plant; and 108 individuals who have ties to the Cowan neighborhood, which is located nearby and comprised of Lebanon Road, West Walnut, Fairview, McCowan Street, Kilby Lane, Caulter Lane Aldridge Lane and other nearby streets, according to the suit.

A large advertisement in The Advocate-Messenger Weekend edition of July 21-22, 2018, sponsored by the Getty Law Group of Lexington, said the lawsuit called Modern Holdings LLC et al. vs. Corning Inc., et al was filed in 2013 and was pending in the U.S. District Court for the Eastern District of Kentucky.

“The lawsuit was initially proposed to proceed as a class action; however the Court recently ruled that the claims of affected individuals must proceed on an individual basis.” The law group was seeking individuals who owned property or had lived in the area who wanted to know more about their legal rights in the situation.

The complaint filed last week states after the plant was constructed in 1952, “Corning began polluting the area by expelling lead, arsenic and TCE (trichloroethylene) into the air and water.”

“(T)he families in the Cowan neighborhood continued to use well water, eat vegetables raised on their properties, and hunt for small game and harvest watercress in the waterway running directly behind the facility (the Clark’s Run Watershed),” the suit alleges. The defendants “failed to warn of the possible harm from such activities and use. The community also collected spring water from a natural spring near the facility.”

The suit goes on to read, “Corning, and later Philips, further exposed the community to lead, arsenic and TCE by allowing the development of a little league ballfield on top of a dumping area for slag and glass pellets located on the facility’s grounds. This ballfield is contaminated by excessively high levels of lead and arsenic to this day. … Upon information and belief, Corning dumped waste containing numerous hazardous substances (including lead, arsenic and TCE) in the area now known as Cowan Park for many years. Numerous named plaintiffs also recall seeing defendants dump barrels of sludge and other waste at unregulated sites on Lebanon Road and Redryer Lane.

The suit alleges the plaintiffs suffer from a variety of illnesses as a result of exposure to the chemicals, including asthma, hypertension, high blood pressure, cancer, diabetes, balance disorders, memory loss and learning disabilities, among others.

The complaint states that the City of Danville, along with Corning and Philips, took action “to conceal the presence, effects, extent and nature of the contamination alleged herein, and continue such efforts to this day.”

The suit asks that the case go to trial, judgments to be made individually and and damages be awarded on charges of nuisance; trespass; negligence, gross negligence and recklessness, negligence per se; battery; fraudulent concealment; negligent infliction of emotional distress.

The program director of Shepherd’s House didn’t know what to think as the newest members of Boyle County’s government took... read more