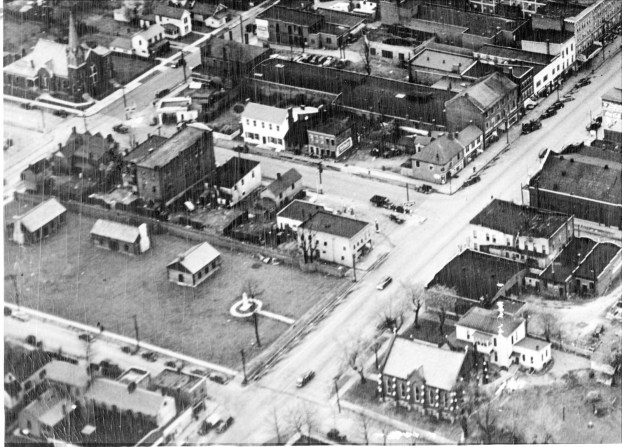 Constitution Square, then called Weisiger Memorial Park, was built in 1937 and dedicated in 1942. An early aerial view shows the new park bare of vegetation, with the African-American businesses still standing along Second Street. In 1944 the Garden Club of Danville planted over 100 native trees donated by Robert Darbishire. Seventy-five years later some of those trees still tower over the park. Photo from Boyle County Public Library archives.

Pioneers entering Kentucky along the old Wilderness Road found lush forests composed largely of old, broadleaf trees with very little undergrowth beneath their spreading branches. Settlers felled the trees to create clearings where they built cabins with the plentiful logs. Cabins in a forest clearing were the vision of a man named Robert Shelby Darbishire for the newly constructed Constitution Square in 1944. Three cabins had been built, replicas of the original meeting house, courthouse, and jail, but the new park was bare of vegetation. Darbishire wanted to plant a forest around them on the three acre site.

At that time the site was a State Park and was for several years called Weisiger Memorial Park. Darbishire first received permission from the State Park Commission, then consulted a nurseryman who suggested the planting design. The trees were to be planted irregularly and close together around the periphery of the cabins to give the effect of a forest clearing. Darbishire presented his plan to the Garden Club of Danville and offered to donate over 100 young native trees from his farm if the Garden Club would plant them. At the club’s monthly meeting on March 8, 1944, a motion was made and approved to accept Mr. Darbishire’s generous offer. His wife, Ruth, was a member of the Garden Club and perhaps that influenced his decision.

No time was wasted. A newspaper article two weeks later reported that the trees were in the ground and “a wilderness effect is apparent to those who have passed and commented.” Minutes from April, 1944, report that the club had hired two men to dig the holes and stake the young trees. Stagg Lumber Co. donated 75 stakes. The club reimbursed Mr. Darbishire $11 for his expenses. An old black and white photograph now hanging in Grayson’s Tavern shows the new log courthouse with small saplings planted nearby. 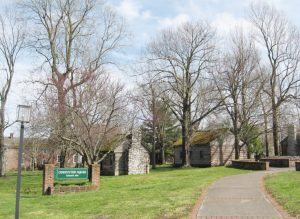 The trees of Constitution Square are one of Danville’s treasures. As such, they deserve protection and care to ensure that they thrive and continue to shade this beautiful park.
Photo by Susan Jonas.

The list of 35 species included sugar maples, several kinds of oaks, sycamores, ash, hickory, hackberries, elms, and other large forest trees. Among the understory trees were dogwoods, redbuds, wahoos, and pawpaws. There were also large shrubs such as witch hazel and serviceberries. The evergreens were cedars and yellow pines. It would have been a native plant paradise for birds and pollinators. Unfortunately, things didn’t go exactly as planned.

The Garden Club’s Beautification Committee and Mr. Darbishire expressed the hope that a brigade of club members, Boy Scouts and others would water the trees in case of drought. For some reason that didn’t happen, because in July of that year a city councilman complained that many of the young trees recently planted in the park had perished from the drought. He was certain that steps would be taken by the Garden Club or other civic organizations to restore the beauty of the site. No records were found of what those steps might have been, but trees were certainly replaced, as some of them tower over the park today. I like to think the Garden Club stepped right up to replant those trees.

Researching this history, I became curious about Robert Shelby Darbishire, who had a vision of what Constitution Square should look like, and lived on a farm large and diverse enough to supply over 100 tree saplings of 35 varieties. Mary Girard, Assistant Reference Librarian at Boyle County Public Library, quickly provided information and the picture of a fascinating man emerged.

Darbishire was born in 1886 in Florida, the son of an American mother and a British father. Three years later his father died and his mother took her son to England to be near his paternal grandparents. There he attended the exclusive Rugby School, and later Balliol College at Oxford University. He was a classical scholar who later studied Islamic culture and became highly proficient in Arabic. For a time, he was associated with an archeological project in Greece, and was an instructor of English and History at Athens College in Greece. The famed British historian Arnold Toynbee was a close personal friend and visited him here.

His middle name of Shelby points to a connection with Kentucky’s first governor, Isaac Shelby, and this is confirmed by his Kentucky residence. While Darbishire and his family lived in Europe and Connecticut at times, he maintained a retreat at Arcadia, a Shelby home in Lincoln County, and spent his later years there. Arcadia Farm features a Greek Revival mansion near Junction City built in 1836 for Isaac Shelby, Jr., the fourth son of Kentucky’s first governor, Isaac Shelby. Arcadia remained in the Shelby family until the 1960s. It is now a wedding venue.

Robert Darbishire died of heart disease at the age of 63 and is buried alongside his wife in the Junction City Cemetery. His name has been largely forgotten, but some of the trees he gave to Constitution Square are just now breaking into leaf for another year. That’s a fitting memorial for anyone.

Springtime and mold: an unexpected issue during the season

By ALETHEA PRICE Boyle County Extension Agent for Family and Consumer Sciences This time of year we start thinking about... read more