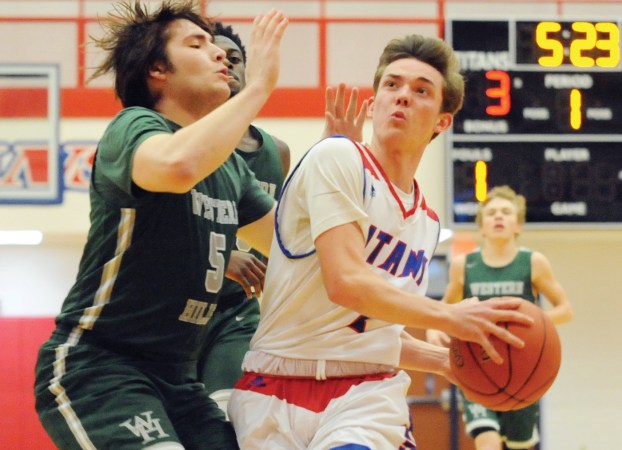 Centre made it known that it wanted Carter Baughman on its men’s basketball team.

Baughman said the Colonels made the most effort in their recruitment, and that was a major reason for his decision to commit to Centre this week.

“They definitely showed the most interest,” Baughman said. “They started reaching out to me this past summer when I was playing with Matt’s Mustangs, they came to probably half of my home games this year, they came to all the away games that they could. All of the letters they wrote me were hand written. Really they just put the most effort into recruiting me, they made it known that they wanted me there.”

Baughman, the 12th Region Player of the Year and Advocate-Messenger All-Area first teamer, said he knew he wanted to play basketball in college when he was in middle school.

Centre will give him that chance, and he’s a stellar fit for the area school, Mercer head coach Josh Hamlin said.

“Carter was a great get for coach (Greg) Mason and his staff at Centre,” Hamlin said. “Coach Mason has a first-class program and is a tremendous coach. Carter understands what it takes to be a Colonel and the expectations to be a Centre College player. This is a great get for coach Mason and a great decision by Carter, not only for his basketball future but his academic future.”

Baughman has the experience playing with college-ready basketball players: At Mercer, he was a full-time starter with 2018 Mr. Basketball Trevon Faulkner, who just finished his first year at Northern Kentucky.

This past summer, Baughman played AAU with Matt’s Mustangs, a team based in Lexington. He played with Madison Central’s Isaiah Cozart (Kentucky’s 2019 Gatorade Player of the Year) and Pendleton County’s Dontaie Allen (Kentucky’s 2019 Mr. Basketball), who are going to Western Kentucky and Kentucky, respectively.

Those games helped Baughman hone his craft as a guard, he said.

“A lot of games where we were playing, the spotlights were on them,” Baughman said. “Some people wouldn’t like that, but that didn’t bother me because I knew it was going to make me better, playing with people like that and playing against that competition. I just looked at is as an opportunity for me to get better. I knew I was going to have opportunities to play at the next level, playing with people like that just made me better.”

Baughman saw his average at Mercer County improve every year at Mercer, and he’s shot above 40 percent from beyond the arc each season as well. His numbers were best as a senior, finishing with more than 21 points per game and a 44 percent mark from beyond the arc.

Those numbers were appealing to Centre, but the Colonels will like Baughman’s willingness to play against an opponent’s best.

“Carter has played with some tremendous talent throughout his high school and AAU career,” Hamlin said. “He played a very challenging high school and AAU schedule against the state/nation’s best players. Carter’s willingness to challenge himself against some of the best players in his class will help make his transition to college basketball easier.

Baughman said the Centre coaches want him to be a player who pushes the tempo in their high-scoring system.

“They said that they’ve been needing a point guard that can make everybody else go, they’re wanting to be an up-tempo team,” he said. “They play fast, they need somebody who can get the ball up and get it to players in transition so they can play faster, make them better, too.”

That’s something that Baughman loves to hear, and he also liked the challenge of earning playing time as soon as possible with the Colonels. There were no promises of playing time.

“If I go in and I prove that I can play as a freshman, maybe,” Baughman said. “But they didn’t promise me anything and I didn’t want that. I want to go in and earn whatever it is. I’m looking forward to that.”

Baughman took an overnight visit to Centre earlier this week to start his spring break, and that’s when he realized that Centre was the best fit. He had taken an overnight last fall, played pickup with the team, but this visit set the school apart.

“After this one, I just decided that this was where I felt the most comfortable,” he said. “I think the visit is what made my decision final.”

The Mercer star is excited to get started at the next level and said the relationships are what made his time in high school special.

By LARRY VAUGHT Contributing writer Having a successful student-athlete become a Division III college coach at his or her alma... read more